The story begins harmlessly enough. Sandy, 16, wants to see a movie with her 17-year-old teen paramour. But Basti would rather watch football and brushes her off harshly. The rejected girl tries to accommodate him and puts on a tank top covered with soccer ball prints. Trying to be a good sport, she goes with Basti to watch a match. Unfortunately, the goodwill soon disappears, they fight and Sandy leaves to drown her sorrows in beer.

"One Night Stand" is the title of a "photo love story," which first appeared in a 2006 issue of the German teeny magazine Bravo, and was recently reprinted. With its photo illustrations of simulated sexual situations -- think, "My First Time," -- and its "Dr. Sommer" advice column, Bravo has long been known as a beacon of light for young people seeking to steer a safe course as they get their first hands-on experience with the birds and the bees.

With " One Night Stand," (ed's note: link is in German) it's not difficult to imagine what will happen next. Before long Sandy is chugging one beer after the next. The teaser to the story states: "Sandy gets drunk and cheats on her friend, with absolutely devastating consequences!" Another teaser inside the story states: "Sandy has no interest whatsoever in football -- and she makes an ill-fated mistake."

She Gets Drunk, He Takes Advantage

One might expect that this ill-fated mistake is that fact that she cheated and that the devastating consequence is that Basti has dumped unfaithful Sandy. But what comes next is worse and it has also triggered a protest on the Internet.

The bad guy in this story is Rob, 17, who, according to the profile, is into "blondes" and likes to "take what he can get (girls too)." Rob begins chatting with Sandy and encourages her to continue drinking. "Come on, you can drink another." He says he will walk her home to her place, but instead they wind up at his. Once in bed together, Rob begins stripping Sandy, who by now is quite drunk. What happens next looks a lot like taking sexual advantage of a drunk person who has lost control or even sexual assault. A thought bubble above Sandy's head reads, "I think I am going to pass out."

Few noticed the photo novel when it was first published in 2006. It wasn't until now, five years later, the Bravo.de website reposted the tale of sexual misadventure that it was noticed by Nadine Lantzsch, who works for the German feminist blog maedchenmannschaft.net. When the blogger clicked through the story, she could hardly believe her eyes. A reader had brought her attention to the photo gallery by sending her a link. After looking at the site, Lantzsch wrote an entry on her blog under the headline, "Bravo Glorifies Rape." Readers of the blog then posted links to Lantzsch's article on Twitter and Facebook.

In fact, the way the sex is depicted in the story is quote dubious. After the act, Sandy accuses herself of having deceived Basti ("How could I have done it?), before saying: "It wasn't a nightmare -- it was cheating."

In her blog entry, Lantzsch writes that, in the piece, Bravo has "portrayed non-consensual sex without exploring the problems relating to it." Lantsch told SPIEGEL ONLINE by phone that she has since complained to both the editors at Bravo as well as its publishing house, Bauer. Lantzsch said she is concerned that the photo story does not sufficiently describe the encounter depicted in the story as sexual violence. And that's not the only problem with it.

Once Sandy settles down in the story, she also learns that Rob is HIV-positive. She then not only reproaches herself for cheating on her boyfriend, but also for having unprotected sex. She takes an HIV test and learns that the results will first be available in 12 weeks. When she tells her best friend about it, the girl distances herself from her, saying she has no time to hang out. And when Sandy explains what happened to her boyfriend Basti, he reacts angrily, saying that "this guy can be prosecuted for what he did to you."

Later, Sandy and Basti, who appear to have made amends, coincidentally run into creepy Rob at a lake and Basti attacks him. But that, too, has devastating consequences. Basti strikes Rob on the chin and draws blood. His hand becomes covered in blood and he fears he may have sores that could have caused his blood to mix with Rob's. "I can't flip out now," the thought bubble over Basti's head reads. Sandy chimes in, "We'll get over this, honey." But whether or not the pair has become infected with HIV or not remains the secret of the Bravo editors.

"In addition to belittling rape and victim blaming, (Bravo) has also included prejudices about those ill with HIV -- portraying them as pathological and socially isolated -- people who ruthlessly 'infect' others just as soon as they have the opportunity," Lantzsch writes in her blog entry.

Lantzsch says that she and her colleagues at the maedchenmannschaft.net blog often inform companies and media of such mistakes, but that they are often brushed off by the editors. "It isn't seldom that we get answers like: 'You didn't understand the joke'," she says.

At Bauer, which publishes Bravo, though, there is no talk of any such jokes. "We cannot understand the blog's tendentiously formulated critique of Bravo and the concept of the photo novel and we expressly reject it," a statement from the publisher read. The aim of the photo novel, the company wrote, "was to show precisely what can happen, with illustrative and understandable stories for youth."

"The photo novella, which appeared in 2006, sketches out all the relevant issues that can be unleashed under the influence of alcohol, including abuse of alcohol and the dangers of loss of control as well as the possible serious consequences of unprotected sexual intercourse and sexually transmitted diseases," the statement continued.

For a magazine aimed at children aged from pre-pubescent to post-pubescent, Lantzsch believes that's a little too much territory to try to cover in one spread. "HIV and sexual aggression are too much for one story in Bravo," she said.

Bravo readers themselves appear to be less critical of the story -- at least going by the comments posted on the website. They blast Rob for not disclosing his HIV status and they also have harsh words for the girl who leaves her close friend Sandy in the lurch after finding out she might have HIV. Nobody seems to like the open ending, either.

But was it all bad? Perhaps not, going by what user "Änton" writes: "I didn't even know you could get AIDS through blood." It turns out he may have actually learned something through the crude love story. 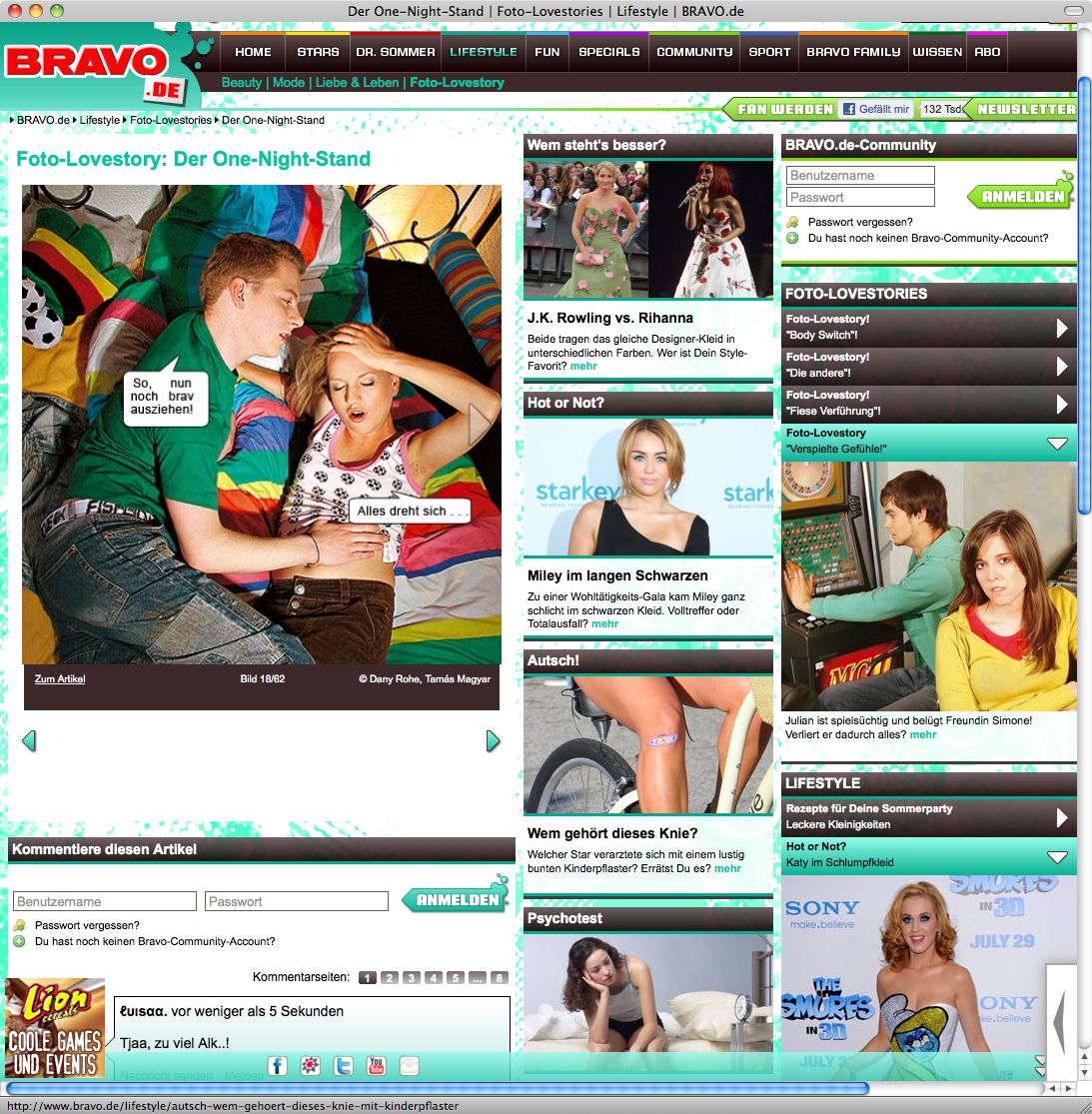 A screenshot from the Bravo story: "So, be good and take your clothes off." "Everything is spinning ..."