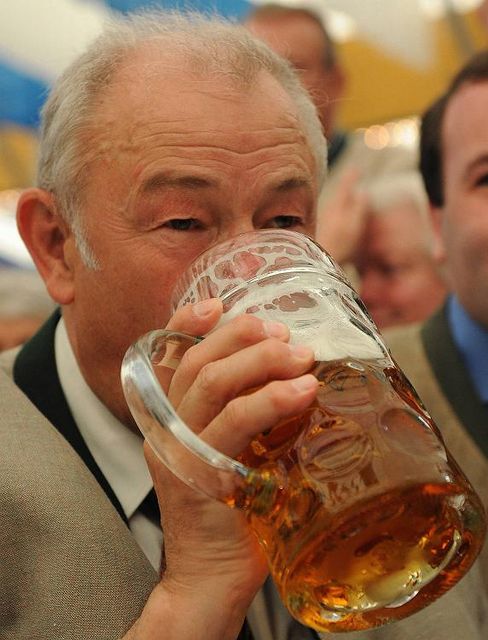 The governor of Bavaria, Günther Beckstein, has come under fire for saying it's all right to drive after drinking two liters of beer.

"It's not a problem if you drink one Mass (one-liter glass), or two if you're there for a few hours," Beckstein told an audience in a speech in a beer tent in the town of Erding, according to Munich newspaper Abendzeitung.

Beckstein, battling to retain an absolute majority for the staunchly traditional and conservative Christian Social Union, said he was against lowering the alcohol limit for drivers.

He said beginners should not drink and drive but that a grown man should be able to consume two Mass (just under three and a half pints) without becoming incapable of driving. "Of course that doesn't apply if one drinks the two Mass in two hours," said Beckstein.

Beckstein was speaking ahead of the opening on Saturday of the Munich Oktoberfest, the world's biggest beer festival at which strong beer is served in liter glasses.

Beckstein's comments drew vocal criticism from the government's commissioner on drugs, Sabine Bätzing, who said: "Günther Beckstein appears to have had one too many. Two liters of beer exceeds the World Health Organization's recommended volume threefold."

The opposition Green Party also criticized him. Theresa Schopper, the head of the Greens in Bavaria, said Beckstein should think about introducing a legal alcohol limit for beer tent appearances. "That would sharpen one's judgment and help to avoid talking nonsense," she said.

The regional chairman of Bavaria's police federation, Harald Schneider, said: "I ask myself what got into him there. He had probably had two Mass of beer before he said that." People who drank two liters of beers and then drove risked lives, he added.

Beckstein backtracked on Tuesday, saying he didn't want to encourage anyone to drive after drinking two liters of beer. "One mustn't drink and drive," he said.