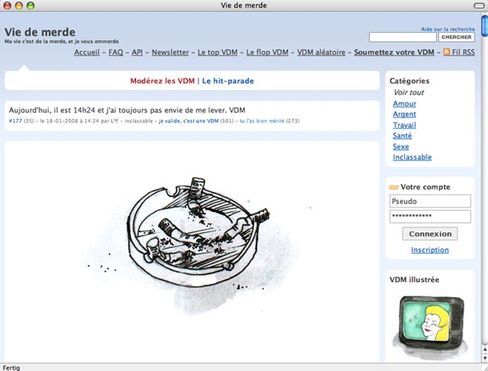 "I got two text messages from my girlfriend. In the first she said it was all over. In the second, that she had sent the message to the wrong person. Life is shit."

"Today my boss came in and asked: 'What are you working on?' I said: 'On my departure.' He seemed to have forgotten that he had just fired me. Life is shit."

"Today my 9-year-old daughter, who I raise alone, had to write an essay on the person in her family she loves the most. She got an A- for her very moving tale -- about Skippy the guinea pig. Life is shit."

These messages describe the big and small crises of everyday life, the beastliness of what can happen at work, the abysses of romantic relationships. They all appear as electronic messages on the French-language Web site "Vie de Merde" (VDM), or "Life is Shit."

This online wailing wall for everyday horror consists of short messages -- written with often laconic wit, largely uncensored -- and seems to meet two different needs. It lets the writers vent their emotions, and lets readers indulge in schadenfreude at the lives of others.

Since it was launched in February, more than 2,400 anecdotes about French suffering -- in the categories love, money, work, health, sex, and "non-classifiable" -- have appeared on the simply designed site, which began as a blog. And then there are the comments, some of which openly gloat at the person's misery. Maxime Vallette, the site's founder, admits that another 40,000 messages are waiting to be posted.

Vallette told Libération, a French newspaper, that she has no idea whether most of the tales are true. "Some stories seem unbelievable, just because they have never happened to you. But even the most stupid stories are not necessarily false."

Like when someone writes, succinctly: "My girlfriend beheaded the cat when she pulled down the window. Life is shit."

Or: "Today, after a long series of tests, I found out I am infertile. My wife is pregnant with our second child. I think I need to ask a few questions. Life is shit." The most-read message is also from the realm of love: "I'm 45 years old and still a virgin. Life is shit." The comment from one reader: "That's true."

Is this playing with fire? Or does it provide a kind of relief through shared knowledge and sympathy? A sense of having partners in suffering? Maybe that's what a new writer thought when she wrote: "I discovered VDM today. I read a few pages and found a story that made it clear to me that my guy has a lover because the circumstances are relatively unique. And he didnt even bother to change his password. Life is shit."

The site is buzzing. Perhaps it helps that people posting messages only have to follow very simple rules. The content guidelines are not much longer than the motto of the site: "My life is shit," it reads, "so up yours!"