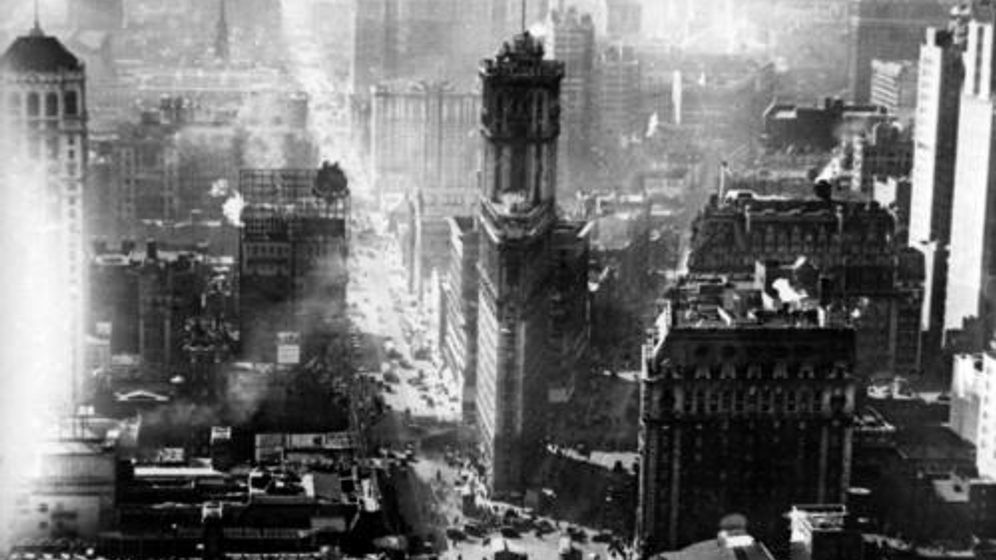 Captain Hans-Heinz Lindner was gradually losing his nerve. As dawn broke on June 13, 1942, the first cars were already driving along the waterfront in the village of Amagansett, Long Island. But the U-202 was stuck. The gray steel colossus lay perched on a sand bank in shallow water less than 200 meters (656 feet) from the shore, as helpless as a beached whale. In just a few hours, anyone who walked by would be able to see the German U-boat sticking up out of the Atlantic.

Lindner, though, managed to break free. Running the engines at full power, he was able to maneuver the submarine in a rising tide back out into the open sea. The U-202 slipped beneath the waves before anyone saw it. Below deck, the sailors celebrated their last-minute rescue.

That near-loss of one of the German submarines operating off America's East Coast was the prelude to one of Germany's most bizarre World War II military operations: the infiltration of a group of saboteurs onto American soil. The Third Reich aimed to hit America on the home front and Nazi strategists came up with a number of plans for costly attacks designed to rattle the bustling metropolis of New York to its core -- whether with super missiles, kamikaze pilots, long-range bombers or secret agents.

But the German spies brought to the enemy coast by the U-202 in the daring "Operation Pastorius" made little headway on their ambitious mission. Despite the German military's best efforts to select and train eight members of the terrorist team, the Nazi infiltration proved to be a spectacular failure.

Although all of the men had spent time in the United States prior to the operation, none had had any experience working for an intelligence service. In April 1942, they were sent to Gut Quenzsee, a town 75 kilometers (47 miles) due west of Berlin, for a crash course in sabotage. For 18 days, military experts drummed into them how to use explosives, timed detonators, guns and hand grenades. To stay fit, they practiced Jiu-Jitsu. Then, in June, two groups of four freshly minted secret agents each were dropped off on the coasts of Florida and Long Island, one by the U-584, the other by the U-202.

The teams had been sent to America to blow up railroad bridges, power plants and tunnels, to paralyze industrial facilities vital to the American war effort and to demoralize the American civilian population. One historian has dubbed it "the most daring sabotage plans in history." But it turned out to be a major headache for their German superiors. The German agents blew their cover after a mere two days in the field, and prompted the FBI to launch its largest manhunt to date.

Primary responsibility for the espionage disaster lay with Georg John Dasch, the 39-year-old leader of the Long Island group. After having almost drowned during the effort to get on land with an inflatable raft, he was soon discovered among the dunes by the flashlight-wielding, 21-year-old Coast Guardsman named John Cullen. When Cullen first came upon the sopping wet Dasch, the latter pretended to be a fisherman. Then, Dasch grabbed Cullen by the collar, threatened him and eventually jammed $260 of would-be hush money into his hand. In return, Cullen was supposed to immediately forget about the four men he'd seen on the beach.

Of course, the suspicious Coast Guardsman did nothing of the sort. He immediately informed his comrades, who would eventually dig up four crates of explosives and some German uniforms that had been hastily buried in the wet sand. The FBI was also alerted, and a feverish search for the four strangers began.

The four took a train to New York City, where they checked into a hotel. Soon afterwards, Dasch traveled to Washington, D.C. where he turned himself in on June 19. To prove he was a spy, Dasch showed FBI agents tissues on which he had written down his targets in invisible ink. Later described by the interrogating police officer as "neurotic," Dasch divulged every last detail of "Operation Pastorius" to the Americans. Using the information, FBI agents rounded up the three spies in the New York hotel as well as the four German saboteurs who had landed in Florida.

On August 8, 1942, the short careers of six German spies came to an end in the electric chair of the District of Columbia jail. The sentences of the other two, Dasch and Ernst Peter Burger, were commuted by President Franklin D. Roosevelt to 30 years and life in a US prison, respectively.

In faraway Germany, despite the failure of the sabotage mission, Hitler was still obsessed with the idea of seeing New York in flames. As he saw it, his mighty opponent on the other side of the Atlantic had to be forced out of the war by several well-placed attacks on the home front. As Hitler's favorite architect, Albert Speer, recalled in his "Spandau Diaries," Hitler took great pleasure in watching films in the Reich Chancellery of "London burning," of "exploding convoys" and of a "sea of fire over Warsaw." Hitler was intoxicated with the idea of "the downfall of New York in towers of flames."

Given Hitler's enthusiasm for striking at New York, it's no surprise that Nazi strategists developed several plans for just that, some of which even pre-dated the war. In 1937, for example, during a visit to the factories of the Messerschmitt aircraft company in the southern German city of Augsburg, Hitler was presented with the prototype of a four-engine long-range bomber, the Messerschmitt Me 264, which was being designed to be able to reach America's East Coast from Europe.

Hitler was thrilled about the idea of an "Amerika bomber" whose explosive cargo could reduce US cities to ash and rubble. But what he didn't know was that the Me 264's designer, Willy Messerschmitt, had actually shown him a mock-up that wasn't capable of flight in order to win a lucrative contract -- and no one could really say when the aircraft would be ready to be put into operation.

When it starting looking like they would lose the war, the Nazis started putting a lot of hope in developing so-called "miracle weapons." The army research center at Peenemünde, a village on the Baltic Sea island of Usedom, was a cornucopia of such ideas. The same center that had more or less successfully fired the first V-2 rocket in 1942 was supposed to be able to finally launch an "Amerika rocket" by the time the war ended.

The A-9/A-10 rocket was designed to be 25 meters (82 feet) long, or about 10 meters longer than the V-2. Weighing nearly 100 tons, it was engineered to climb to an altitude of 24 kilometers (15 miles) before beginning its trans-Atlantic flight toward the United States. Another research group aimed to allow a pilot to steer the rocket and eject just before it reached its target -- a veritable suicide mission.

In theoretical terms, at least, the destructive ingenuity of German engineers knew no bounds. They toyed with the idea of having submarines pull floating containers holding modified V-2 rockets to America's East Coast. Once in position, the containers would have been flooded in a way that made the rockets point straight up out of the water, clear for launch.

The development Nazi military technology was only made possible through the brutal employment of forced labor. Workers died by the thousands in underground production facilities and secret factories. But there were also many volunteers who -- for the sake of the success of the "America weapons" -- would have been willing to die a miserable "hero's death," even if it meant steering rockets launched from carrier planes kamikaze-like into downtown New York.

In the end, all the high-flying attack plans of the Nazis only had one thing in common: none of them were put into action. In December 1941, the American magazine Life published a sketch of the Big Apple under a headline about how Nazi planes could bomb New York. In 1944, the same publication quoted New York Mayor Fiorello La Guardia as saying there could be a German missile strike on the US. But, in the end, neither an "Amerika bomber" nor a long-range Nazi missile was ever to appear on the New York skyline.

More than anything, it was Allied bombing raids on German factories that persistently delayed the development of trans-Atlantic attack capabilities and, as the war went on, made them impossible. A shortage of materials, a lack of time and the sheer volume of new engineering projects worked to prevent the fulfillment of Hitler's dream of seeing America go up in flames.

When it comes to the amateur agents involved in "Operation Pastorius," it's more than likely that they would have eventually blown their cover, even if Dasch hadn't defected. Indeed, from the very beginning, the mission was ill-fated: One of the agents had already ducked out of it after having contracted gonorrhea in Paris. And, in the United States, Edward Kerling, the leader of the four-man team in Florida, reportedly boasted to an old friend there about his secret mission. And Herbert Haupt, a member of Kerling's team, even visited his father in Chicago and asked him to buy him a black Pontiac sports car -- claiming he needed it while travelling on business for the German government.