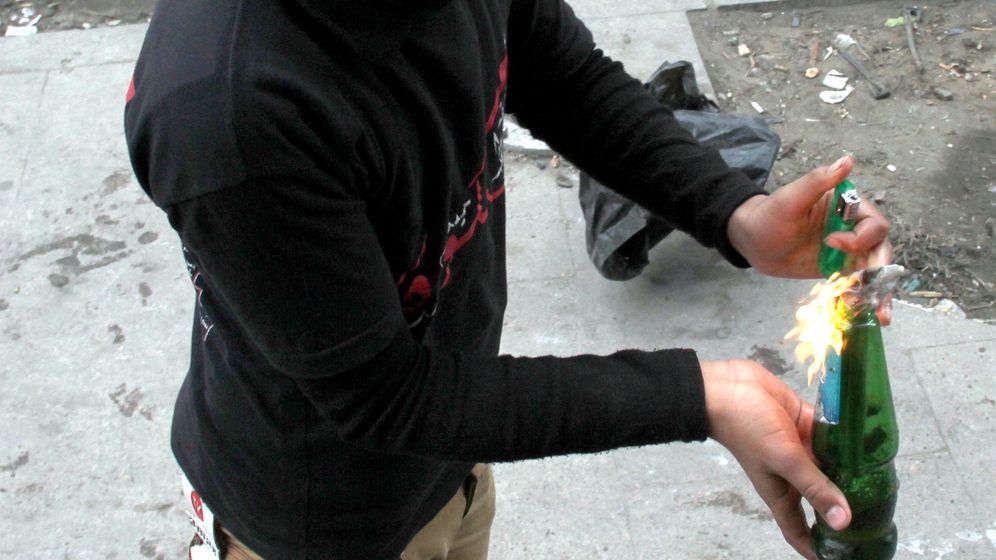 They're suspicious -- five young Egyptians in hooded sweatshirts with their faces hidden, arms crossed and bodies in a defensive stance. "The media represents us as thugs," says one. "They say we're killing policemen and setting the country on fire, but we are just defending ourselves. The real aggressor is sitting in the presidential palace."

As Wednesday night turns to Thursday morning, fighting rages in the streets adjacent to Tahrir Square in Cairo -- just as has happened daily for the past week. Security forces and government opponents watch each other furtively, then the first stones are thrown and tear gas canisters fired.

Violence is increasing in the capital, but also in Alexandria, and everywhere else President Mohammed Morsi declared a state of emergency on Sunday of last week: Ismailia, Suez and Port Said. More than 60 people have been killed since Jan. 24, and hundreds have been injured. The protests against Morsi and his Muslim Brotherhood have become more radical, and that due in part to a new phenomenon here: the Black Bloc.

The five young men are members of the movement. They know their emergence has fueled speculation, and that the government sees them as terrorists and enemies of the state. Supporters of the deposed regime of Hosni Mubarak have reportedly mixed in with the masked men, government officials claim. Others accuse the government itself of being behind the Black Bloc, using it as a tool to discredit the opposition. But many demonstrators say the organization is simply an answer to the violence exercised by the Muslim Brotherhood and its thugs.

For President Morsi, the protesters in black present the perfect chance to split the opposition. He brought up the issue last week while visiting Berlin, saying there was a "big difference between the revolutionaries and peaceful demonstrators" on the one side and the Black Bloc on the other. Hasn't Germany often suffered from such troublemakers, too, he asked? Morsi added that Egypt's legal system would take care of the problem.

"We aren't criminals," counters 33-year-old Gika, one of the five in masks. "We are free citizens who love this country." He chose his pseudonym because it belonged to a well-known activist who was killed in street fighting with the police last November.

Unified Hate for the Goverment

On Jan. 25, the second anniversary of the Egyptian revolution, the Black Bloc announced its formation on the Internet. A YouTube video showed images of militant-looking youths in Cairo throwing Molotov cocktails. Many of them wear the grinning Guy Fawkes masks that have become the trademark of the hacker group Anonymous.

"The Black Bloc is everywhere where injustice is committed against a people," Gika says. "We started to mask ourselves so the security forces couldn't identify us. And they've masked themselves too ever since we filmed them purposely shooting demonstrators in the eyes."

No one knows how many members the Black Bloc has in Cairo and other cities, Gika says. He says he saw about 300 masked men on Tahrir Square, and that more and more Egyptians are putting black masks over their heads to show their unified hate for the government and the Islamists. Gika's own group, which he says has no hierarchy and no one person calling the shots, primarily coordinates its actions using text messages and Facebook.

When asked what they want to achieve, Gika replies: "To defend the revolution. To protect every revolutionary from attacks by the Muslim Brotherhood and other thugs. Only 5 percent of our actions are acts of revenge."

But actions like setting fire to tires in front of the president's home in Sharkia province or blocking tram lines in Alexandria are, in fact, vengeance. A YouTube video titled "Black Bloc Egypt" shows the headquarters of the Muslim Brotherhood in flames -- a clear threat.

Gika has been unemployed for two years. He says he, like hundreds of thousands of other Egyptians, feels that Morsi and the Muslim Brotherhood have betrayed the revolution. He is not happy with the performance of the opposition and calls them "very weak".

Gika also says he doesn't see stabile politics as necessary for an economic upswing, nor does he want to wait until the Muslim Brotherhood has snatched control of the entire country. He mistrusts the Islamists and isn't afraid to keep on fighting.

"I know it could cost me my life," he says. "I pray to God every day to prepare myself for that."