Harald Wohlfahrt is used to hearing that his dishes are out of this world. Now, though, they really are -- literally.

Wohlfahrt, recipient of three Michelin stars and among the finest chefs in Europe, is serving up meals to astronauts on the International Space Station. Among the choices: Swabian potato soup, braised veal cheeks with wild mushrooms and plum compote for dessert. The idea, he said, was to create something hearty and rustic. 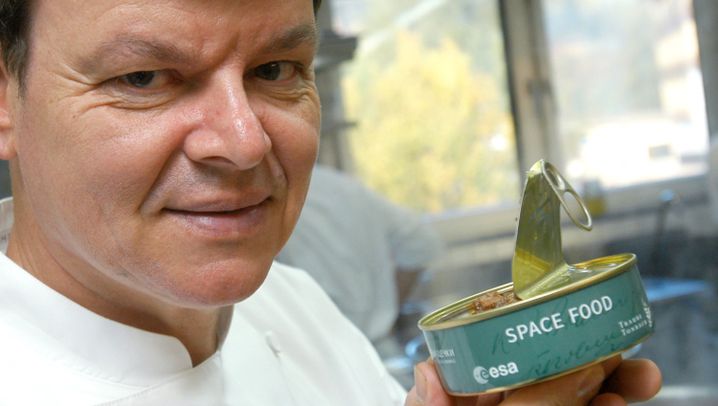 Revamping the menu for astronauts, Wohlfahrt said, began 18 months ago when he learned from former space traveller Ernst Messerschmid that astronauts eat healthy but less tasty meals because of special considerations while in space. Salt, for example, accelerates bone loss. Vitamin D must be added due to the lack of sunlight. Wohlfahrt also learned from the European Space Agency that astronaut food must be highly seasoned as well, due to the fact that the sense of taste suffers during space travel.

But Wohlfahrt didn't face just culinary considerations when he set to work on his space-age spread in the kitchen of his restaurant, the Schwarzwaldstube in Hotel Traube Tonbach in the Black Forest. His orbiting edibles couldn't use sauce because of the danger, in a weightless environment, of spills, which could spell disaster for ISS electrical equipment.

"We had to remove many obstacles," Wohlfahrt told the French news agency AFP.

Martina Heer, a scientific nutrition consultant at the space agency, also noted that products must be preserved and should have at least a one-year shelf life -- like the freeze-dried repastes, most of which come from the US and Russia, that astronauts typically eat.

There was another consideration, too. Transporting a single kilogram of payload to the ISS costs $22,000 (€15,380), placing a premium on weight. "We had to find a can that is very light but still meets the requirements, so as to withstand a certain pressure," Wohlfahrt told AFP.

In the end, Wohlfahrt was successful. Astronaut Frank De Winne tested the menu before his launch into orbit, and enjoyed the German chef's creations. Though, it must be said, there was a lot of room for improvement. Wohlfahrt tasted some standard astronaut fare before launching his space feast project.

"I felt sorry for the astronauts," he told the Süddeutsche Zeitung. "It tasted like cat food."