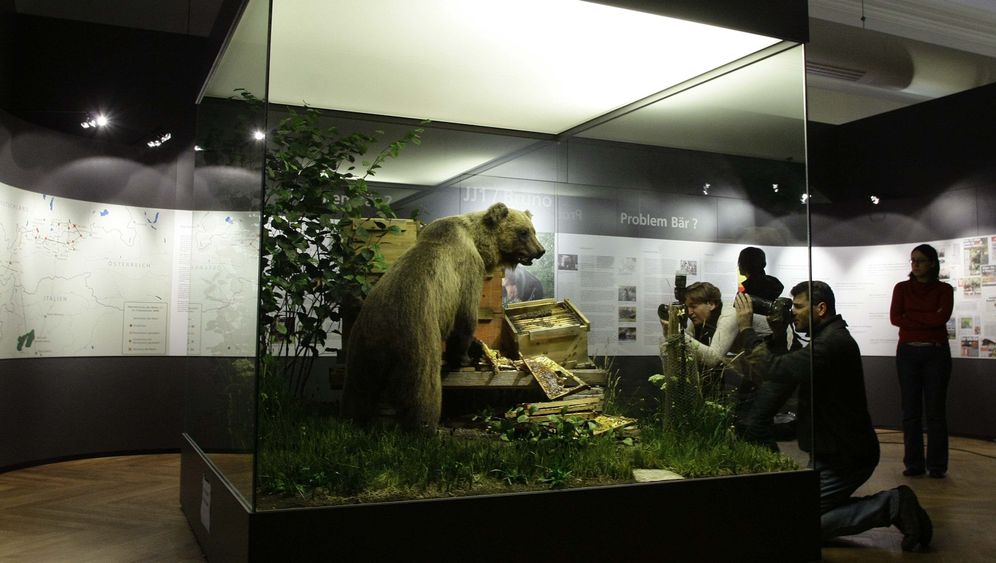 Photo Gallery: Will Dino Go the Way of Bruno?

A bear-sighting in the Italian Alps isn't that much of a big deal. The beasts frequently wander over the border from neighboring Slovenia. And, for the last few years, the European Union has even been promoting the re-introduction of bears into parts of this mountainous region.

But a bear named Dino, who is sending shivers through cattle-farming community between northeastern Italian cities of Belluno and Vicenza, arrived of his own volition. And he is a force to be reckoned with -- not least because of his hearty appetite.

Ravenous after months of hibernation, the bear has been fearless in his quest for food. This spring, he has feasted on local livestock, ranging from chickens to larger four-legged animals, including even horses. It's little surprise that farmers in the Veneto region are less than enthusiastic about their new visitor.

Dino, as he was christened by the Italian media, is thought to have crossed the border into Italy last October. Scientists, who identify him with the somewhat drier name of "M-5," estimate that the bear is five years old and weighs around 175 kilograms (385 pounds). Thanks to a chip implanted in his skin, they can track the roaming bear by satellite around the clock.

Locals are used to the occasional bear, though most animals steer clear of settlements. People living in the region have even been instructed on how to act should they encounter a bear: Stay calm. Don't run away. Don't shout.

Still, these rules don't help them deal with Dino, who has no qualms about popping onto a farm for supper. Now, irate farmers and animal researchers alike hope that Dino will wander off and find a new home somewhere else. But, thus far, he has shown no sign of wanting to move on, which has prompted cattle ranchers to be even more strident in their calls for ending Dino's prolonged feast to end with a bullet.

But while his enemies are arguing that Dino poses a danger to people, a swelling crowd of fans are supporting him online. In fact, more than 10,000 people have signed up as members of the "Dino the bear must live!" fan page on the social networking site Facebook. The site is littered with upbeat messages like: "The forest is his home; keep your hands off Dino!" and "Long live Dino!"

Other online jokesters have set up another Dino-related Facebook page, though this one is aimed more at taking political potshots at the Northern League, the right-wing and anti-immigrant party that is powerful in the region. This group's Facebook page shows a picture of a mauled jackass with the caption: "Dino the bear eats jackasses. Be careful, friends of the league!"

Meanwhile, Italy's experience with Dino recalls the doomed rampage of Bruno, a bear who was once the bane of livestock farmers in the Bavarian Alps. Despite enthusiastic public support, authorities deemed Bruno a threat to public safety and had him shot by hunters in late June 2006.

Right now, Dino's fate remains open. But it is clear where the sympathy of the Italian online community lies: The tongue-in-cheek Facebook group "Let's slaughter Dino the bear" only has 46 members.