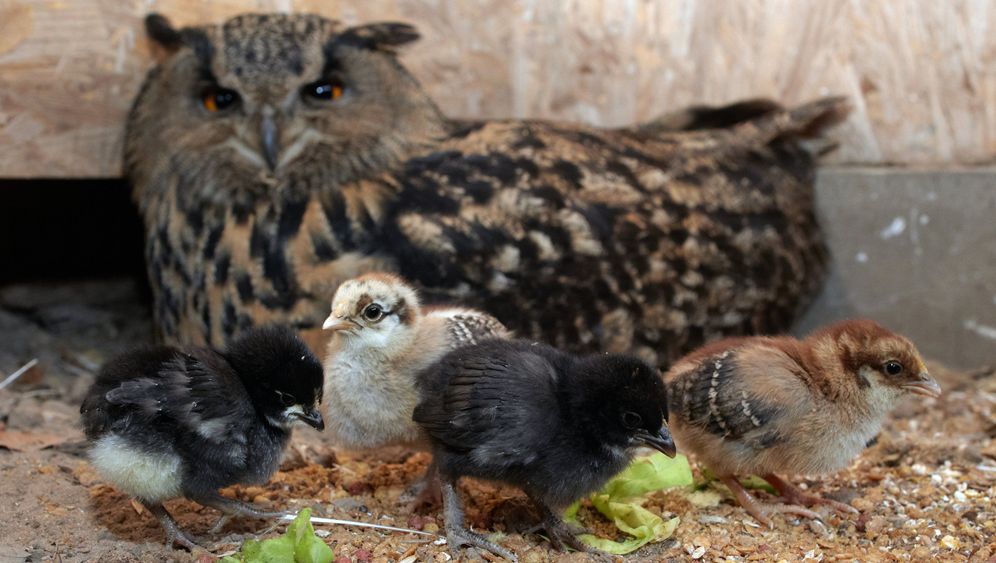 Photo Gallery: Birds of a Feather

A bird center in Germany is attracting attention with an unusual example of a surrogate mother: An eagle owl in the zoo is raising baby chickens as her own young.

The owl in Saarburg's Birds of Prey Park in the western German state of Rhineland-Palatinate has been attentively looking after the four chicks for the past week after successfully incubating a clutch of chicken eggs.

"She's doing a really great job," the bird center's director Wolfgang Klotzbücher told the German news agency DPA, explaining that he has never heard of a similar set-up at any other zoo. "She sees the young as her own children. And she's really happy about it."

The bird keepers in the zoo decided to give the 14-year-old Eurasian eagle owl, who is called Flea because she was very small as a chick, chicken eggs to hatch after they noticed that the bird was very broody. But the bird of prey had little chance of having young of her own.

Having been hand-raised by humans, Flea was "incorrectly imprinted," explained Klotzbücher. "She grew up with us in our home and was always in contact with humans," he told DPA. As a result, she would not recognize a male eagle owl as belonging to her own species -- making breeding a tad difficult.

Nevertheless, Flea had a well-developed brooding instinct. Klotzbücher explained that she laid eggs every year and sat on them -- naturally without result, given that the eggs were unfertilized.

Taking pity on the childless bird, Klotzbücher and a colleague decided to place fertilized chicken eggs under the broody owl -- and she incubated them perfectly for 21 days. But when the chicks hatched, the keepers initially took them away from Flea out of fear that she would eat them. For eagle owls, which "normally eat anything that moves," baby chickens are "basically food," Klotzbücher explained to DPA. But Flea reacted with such sadness that they returned the chicks to their surrogate mother.

And even if the adoptive mother occasionally makes mistakes, such as offering the chicks meat instead of the grains and plants they would normally eat, she is very loving, Klotzbücher says.

"She's the nicest eagle owl in the world."