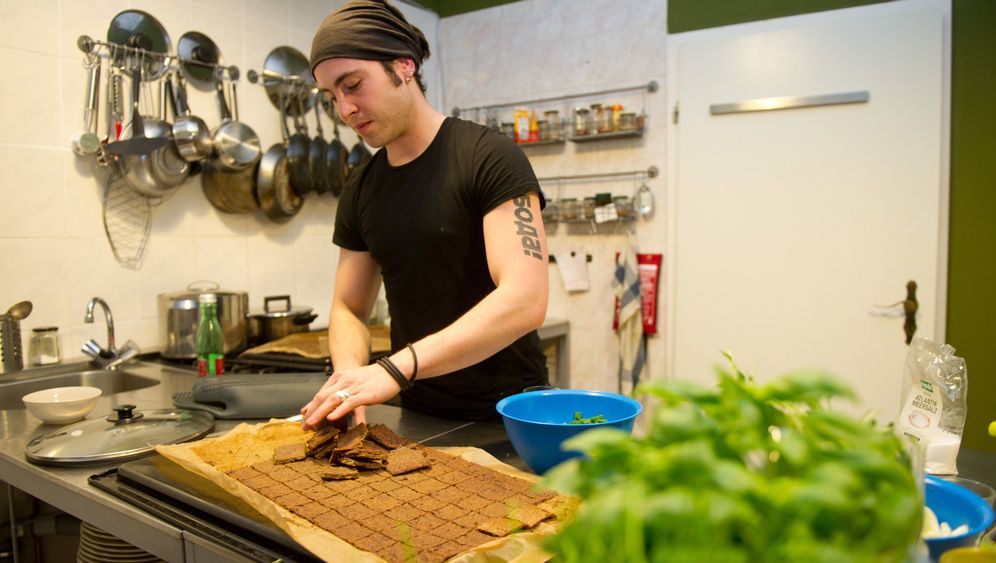 The restaurant menu shows a stereotypical image of modern humanity's forbearer, the jutting profile of a hirsute caveman. Inside, diners eat at candle-lit tables with a contemporary cave painting hanging in the background. These hints aside, Berlin's Sauvage restaurant looks similar to many of the German capital's other trendy eateries. But the chalkboard out front announcing a "Real Food Revolution -- Paleolithic Cuisine!" alerts diners to the fact that their Stone Age menu might offer up some surprises.

Sauvage, which is also the French word for "savage" or "wild," is part of the Paleolithic diet movement, whereby adherents eat only foodstuffs that would have been available to Stone Age humans. This means organic, unprocessed fruit and vegetables, meat, fish, eggs, nuts, seeds, and herbs. The truly obsessed build an entire lifestyle around the concept, mimicking caveman-era exercise -- lifting boulders and running barefoot, with some even emulating the blood loss they believe Stone Age hunters might have experienced in pursuit of their dinner by donating blood every few months.

But guests at Sauvage can try "Paleo" without feeling obligated to take on a strictly Stone Age lifestyle.

"Many people think the Paleolithic diet is just some hipster trend but it's a worldwide phenomenon, with an online community that spans the globe," Sauvage's Boris Leite-Poço told SPIEGEL ONLINE of the growing interest in caveman cooking. "Right now the trend is probably strongest in the United States, where people who have had enough of the fast food way of life and generations of illness have taken it up."

Leite-Poço is quick to point to the health benefits of Paleolithic eating, citing personal experiences as evidence of the diet's benefits. Since going Paleo two years ago, he has enjoyed a medication-free existence, he says. Other benefits of Paleo cuisine listed on the restaurant's website include greater energy levels, increased muscle mass, clearer skin and a higher sex drive.

Wanting to share his positive Paleo experience, Leite-Poço opened up Sauvage alongside his partner and fellow Paleo convert, Rodrigo Leite-Poço, in a former brothel this May. So far the restaurant's health-conscious cuisine has proved popular among Berliners, where Sauvage stands out as what the proprietors say is the only Paleo restaurant in Europe.

The menu includes salads with olives, capers and pine nuts; gluten-free bread with nut-based butter or olive tapenades; smoked salmon with herb dressing; and other various meat and fish dishes. Gluten- and sugar-free cakes, like a spicy pumpkin pie, are available for those Stone Age diners who refuse to forego desert. A focus on transparency is also important to the owners: Sauvage's guests know exactly what ingredients they are eating in every dish.

Asked about menu items -- such as wine -- that would have been unlikely in a Paleolithic person's diet, Leite-Poço acknowledges that Sauvage makes some exceptions. "The restaurant has to survive and we have to find an audience among the majority of people, who are not Paleo. So we do make some concessions," he explains. The stricter strain of Paleo emphasizing the consumption of raw meat, for instance, is tough to implement at a restaurant that wants to keep its license.

While the ingredients on the menu at Sauvage might point to the restaurant's Stone Age roots, the Paleolithic restaurateurs do allow themselves to make use of certain modern conveniences when preparing the food. "Of course we don't cook over an open fire," admits Leite-Poço. "And we try to avoid using it -- but we do have a microwave in the kitchen."