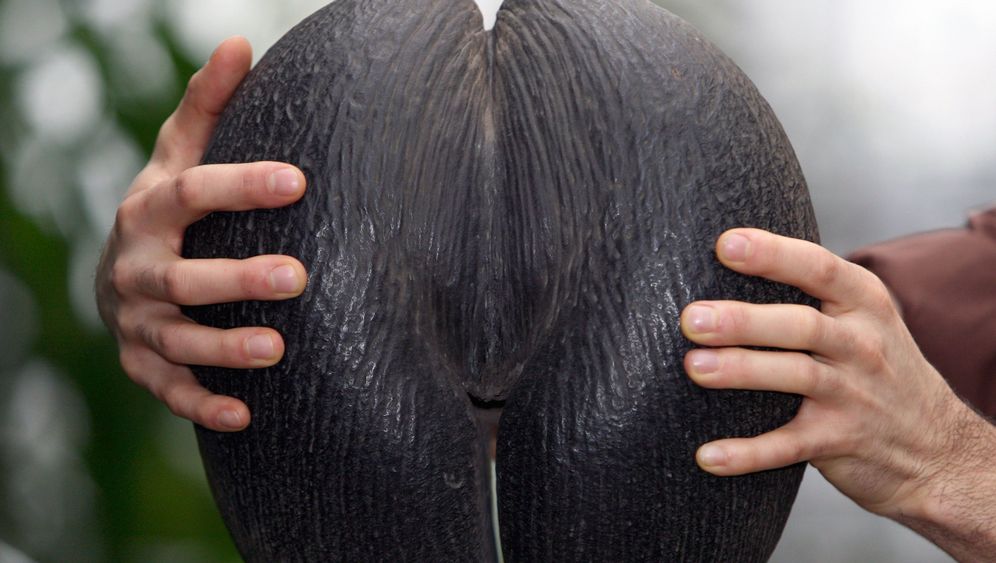 The captain surely imagined it all a little differently. The French adventurer Francois Pyrard intended on sailing to India in 1602. But when his ship Corbin gave out on the open seas, he had to seek refuge in the Maldives. Unfortunately, the king there wouldn't let the shipwrecked party leave for five years.

When Pyrard and his crew were finally able to flee, they took the tale of the strange fruit with them back to Europe. It had been found frequently on the beaches of the islands. It wasn't just that they were gigantic, the fruit's shape was also reminiscent of a woman's pelvic region. The king demanded that these alluring finds be delivered directly to him, and threatened that those who didn't comply would lose a hand, or even be put to death.

What Pyrard saw was the nut of the Coco de Mer palm, one of the rarest palm trees on the planet, also known as the Lodoicea maldivica. It is three to four times as large as an average coconut. They are also heavier than anything comparable that biologists can find, weighing up to 20 kilograms (44 pounds).

And now, for the first time in 80 years, one of these rare nuts is sprouting at at Berlin's Botanical Gardens. On Jan. 19, a group came together to celebrate at the main tropical greenhouse. The director of the garden was there, as were the honorary consul from the Republic of Seychelles, a lawyer who brought the valuable seed to Berlin, and assorted researchers, gardeners and journalists. Drinks and palm-shaped cookies were served. Amid the festivities, the tiny fenced-in plant growing in the bed nearby seemed rather inconspicuous.

"This winter in Berlin is especially gray, wet and unpleasant," said Thomas Barsch, director of the Botanical Garden in Berlin in his greeting to visitors. So it is nice, he said, to be able to celebrate with the palm, a symbol of the tropics. But if the Botanical Garden has more than 22,000 plant species, why is so much attention being given to one that, at least at the moment, looks like an average office plant?

"The Coco de Mer palm is like the panda bear of the plant world, the symbol of an endangered species," Barsch said.

The palms are native to the jungles of the small Seychelles island of Praslin, and some grow on the neighboring island of Curieuse. That's it. In all, there are only about 8,200 of them in existence, probably because the giant trees have a complicated love life.

It starts with the fact that the giant seeds are not good swimmers. Over the centuries, only the rotted out nuts have managed to float across the oceans, with the rest simply sinking. There are also male and female varieties of the tree. Biologists call that dioecy, from the Greek for "two households." The female plants, which bear the giant seeds, grow to be about 25 meters tall. It can take up to seven years before the nuts ripen and fall to the ground, where there is a possibility they will sprout. Maybe.

The male trees deliver the pollen, and can grow to be 30 meters tall, a little bigger than their sweethearts nearby. "How the pollination actually takes place, and when it succeeds, is largely unexplained," said biologist Albert-Dieter Stevens. Maybe the wind completes the job, maybe it's the insects, or even rodents.

The Berlin Botanical Garden has tried several times to cultivate the Coco de Mer palm, failing repeatedly. During the Second World War, in 1943, two palms froze underneath the destroyed roof of the tropical house. They had been cultivated from seeds that a German warship had brought back to Berlin in the early 1930s. For a long time, no new attempts were made. Then, after the millennium there were two new tries.

But now it appears they have finally been successful. In the large tropical greenhouse the botanists have installed a special heating unit in the floor. "Without the technology it won't work, because the Coco de Mer needs warm roots," horticulturalist Henrike Wilke says. She and her colleagues will need a lot of patience, in addition to hope, because the tree may not survive. "Infant mortality does occur," said biologist Stevens. The most critical time will be when the palm uses up the endosperm in its nut and has to grow its own roots.

It will take at least 25 years -- and perhaps even 50 -- before it's clear whether the tree is male or female. But, no matter which it turns out to be, the biologists in Berlin have a long and complicated battle before them when it comes to raising their charge. The palm will only start developing a stem after 15 years. And, to do so, it will first put forth massive leaves, up to 14 meters (46 feet) long and four meters wide.

Prized Through the Centuries

The Coco de Mer has long been an object of fascination. Habsburg ruler Rudolf II forked out a king's ransom for the natural rarity, paying 4,000 guilders for a single nut. By way of comparison, the goldsmith from Prague who was paid to artfully encase it in gold typically brought home only 10 guilders a month.

For centuries, inhabitants of the Seychelles had a thriving trade in the nuts. They were exported to a number of places, including India and China, where they were processed to produce medications and potency enhancers. In recent years, however, exporting them has become a bit more complicated. In early 2010, when the Berlin-based lawyer Robin Maletz was allowed to bring one back to the German capital, he first had to obtain a special permit from the government. In the end, he lugged the nut on to the plane in his carry-on luggage, as an official gift from the Republic of Seychelles.

These days, the hope in Berlin is that the palm tree merely survives. After all, it is a very special plant. During a visit to the Seychelles in the late 19th century, British Gen. Charles Gordon, the former governor-general of the Sudan, stumbled upon the following notion: He was convinced that the Coco de Mer was undoubtedly the forbidden fruit of the biblical Tree of Knowledge. Given what he believed was the nut's uncanny resemblance to a woman's "thighs and belly," he said that it was the only thing that could have unleashed all the cravings of the flesh. If there was any tree that could incite the curious, the evangelical Christian explained, it would be this one.