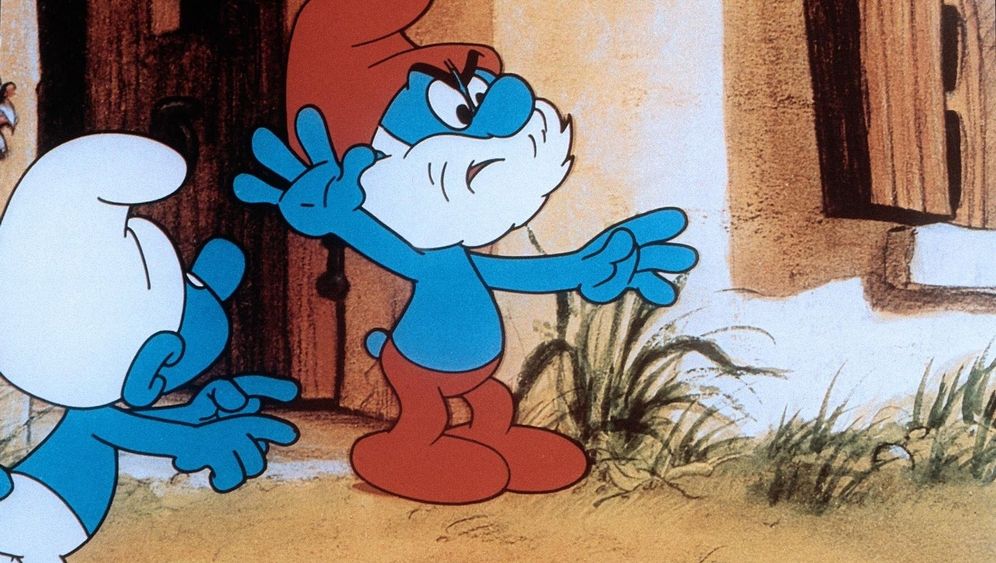 Photo Gallery: Are the Smurfs Stalinists?

The Smurfs seem innocent enough. The thumb-sized creatures live harmoniously in a small village in the woods, their fairytale world threatened only by the dastardly character Gargamel and his Smurf-hungry cat, Azrael. With wit, finesse and the guidance of their leader Papa Smurf, they manage to conquer even the most curious of challenges that come their way. From their appearance to their speech, which is frequently colored by cutesy variations on the word "Smurf," the only danger they appear to pose is a potential saccharine overdose.

But behind the bright blue veneer of a perfect society, totalitarianism, racism and misogyny infect Smurf culture, suggests Antoine Buéno, a researcher and lecturer at the Paris Institute of Political Studies. His new 177-page work, "The Little Blue Book," has exploded like a big blue bomb among Smurf-lovers with claims that their ideal world is a twisted construct where stereotypes and prejudice run rampant. Buéno's critical analysis of the comic book society has sparked an outcry among nostalgic Smurf fans, who say the scholar is "ruining the dreams" of devotees.

Their society is "an archetype of a totalitarian utopia," containing characteristics of Stalinism and Nazism, according to Buéno. Even grandfatherly Papa Smurf, the clan's trusted leader, can't escape suspicion. His white beard inspires comparisons to Josef Stalin or Karl Marx. His tendency to dress in red clothing (other Smurfs wear white) doesn't help his case, either.

Since their birth in 1958, the happy-go-lucky Smurfs have starred in more than 50 comic book albums about their various adventures. The whimsical creatures have become pop culture icons, appearing in short stories, joke books and advertising campaigns, representing everything from cookies to gasoline. In the 1960s, BP fuel stations in the Netherlands started giving customers a free Smurf figurine with every purchase at the pump. The popular ad campaign was extended to other countries, BP says, "fanning a sweep of Smurf mania" that created long lines at their filling stations. The Smurfs have also inspired books, TV shows and movies. The marketing of plastic figurines, plush stuffed Smurfs, board and video games have helped the famous blue creatures climb into the high-profit ranks of the comics industry. Business has continued to boom since Peyo's death in 1992, under the leadership of his son Thierry Cullliford.

But Buéno's "Little Blue Book: A Critical and Political Analysis of Smurf Society" could shatter the fairytale success story. Though he has been careful not to accuse the illustrator Peyo of intentionally infusing his work with such offensive stereotypes, his thesis still outraged Smurf fans, who rushed to defend them. They have unleashed fierce attacks on the author and picked apart his arguments in minute detail online. Buéno has even been threatened, he told a French radio broadcaster.

But he provides plenty of evidence to back up his argument. The Smurfs live in a self-sufficient and well-ordered world dominated by men. They communally build bridges and houses, and don't appear to understand the concept of private property or money. Papa Smurf enjoys an all-encompassing power among their ranks. The Smurfs are a disguised tribute to collectivism and a leader-cult comparable to that of Adolf Hitler, he claims. Meanwhile, Smurfette -- the only female character -- speaks to the Aryan ideal with her blonde hair, awakening the Smurfish lust of the male-dominated community.

The evidence doesn't end there. In their debut storyline, "The Black Smurfs," the blue-skinned heros are confronted with a "racist threat" in the form of their ink-colored enemies. These black Smurfs are capable of communicating only through moronic stuttering and biting the blue Smurfs, causing them to mutate into dark-skinned idiot versions of their former selves. For Buéno, the battle between blue and black points to a thinly-veiled post-colonial ideology and blatant racism.

Meanwhile, the Smurf's longstanding nemesis, Gargamel, can be seen as an anti-Semitic caricature. The greedy villain and hopeful alchemist has made it his primary goal to capture Smurfs -- an essential ingredient in a transformative potion used to create gold.

Buéno, a successful TV personality and university lecturer in France, first tried to spark discussion with his Smurf thesis six years ago -- at that time in the form of a novel. Reaction was restrained. But "The Little Blue Book" now looks likely to become a hit. The upcoming summer blockbuster release of "The Smurfs," a much-hyped 3D movie starring Neil Patrick Harris, will likely increase sales.

Controversy is guaranteed, even though Buéno insists that his analysis is little more than a playful intellectual debate. But Buéno is not the first to sully the once squeaky-clean image of the Smurfs. A Facebook group "Les Schtroumpfs: l'interprétation marxiste" has some 25,000 fans devoted to picking apart the Smurfs' Marxist tendencies.

And four years ago, political scientist Damien Boone of France's University of Lille undertook a scientific analysis of the Smurfs' potential significance to political science, entitled "Towards a Sociology of Fictional Works with the Smurfs as an Example."