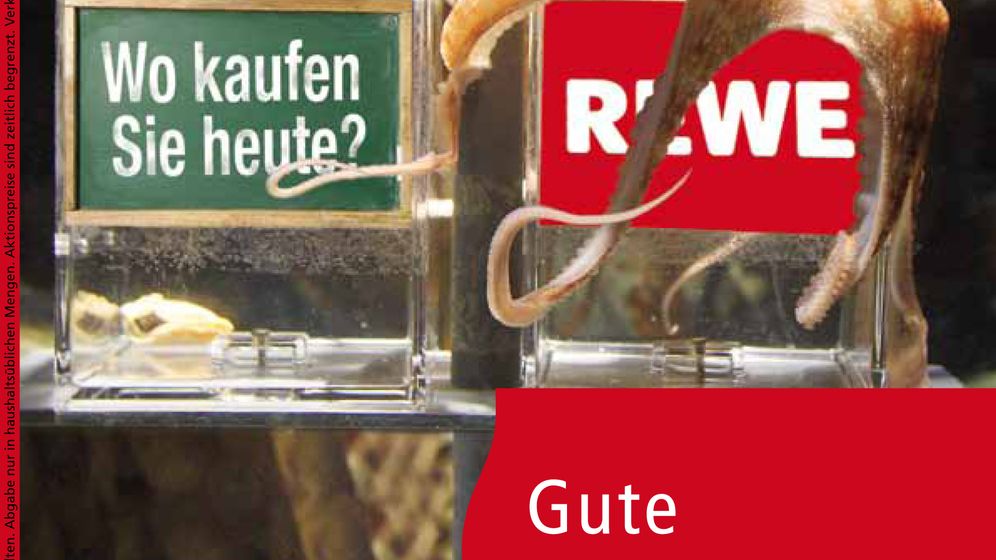 From the depths of the ocean to the height of stardom, Paul the octopus' star hasn't gone dim yet. After shooting to fame this summer by correctly predicting the results of each of Germany's World Cup matches -- including tipping Spain to beat Netherlands in the final -- the cephalopod oracle from the Sea Life aquarium in Oberhausen was featured in recent print ads for the German supermarket chain Rewe.

The ads, which were shot about a week ago, show Paul in his trademark pose atop a transparent box after snatching a mussel from inside. Naturally, Paul chose the Rewe box.

How long did it take Paul to choose the mussel from the Rewe box? "Instantly," the mollusk's England-based agent Chris Davis told SPIEGEL ONLINE. Neither Rewe nor Davis would disclose the amount Paul earned from the ad, but the agent would only say that it was "substantial" sum. Paul's income will go to a turtle sanctuary in Greece, according to the agent.

"Paul has turned into a million-plus brand instantly," says Davis, noting that Paul has so far received more than 160 offers to hawk products. "I have had 37 offers just this morning," he said on Friday.

Rewe is so far undecided on whether it will continue its work with the cuddly octopus. "It cannot be ruled out that we will use the well-known octopus again in our advertising," Rewe spokeswoman Julia Robertz told SPIEGEL ONLINE in an e-mail. Robertz added that Paul's image will only be used in the short-term.

Paul may have bigger fish to fry, anyway. The octopus also has his eight arms wrapped around a book deal, a plush toy contract and will swim alongside David Beckham to promote England's bid for the 2018 World Cup, says Davis.

Nevertheless, campaigning for a supermarket chain may be problematic for the mollusk. On Rewe's own website, the Cologne-based supermarket calls octopus "tasty" and says that "especially coveted are their meaty arms, which also come deep-frozen and pre-fried."

A Fatwa for Paul?

The limelight has come with unexpected perils for Paul. Recently, Iranian President Mahmoud Ahmadinejad accused Paul of spreading "western propaganda and superstition" and posing as a symbol of "decadence and decay," according to the British daily, the Telegraph. Davis even claims that he needs a security detail as Paul's agent following Ahmadinejad's comments.

Even so, Paul is no stranger to danger. During the World Cup, disappointed fans from Argentina to Germany threatened to roast the octopus after he correctly foresaw losses by their squads. And in China, a movie is about to hit the big screen entitled "Kill Paul Octopus," whose fictional plot reportedly revolves around gambling and match fixing at this year's World Cup.

But Paul has a legion of protectors in Spain. Shortly after the nation's World Cup victory, the city council of Carballiño, a town of 14,000 in northern Spain, made Paul an honorary citizen. Carballiño Mayor Carlos Montes traveled to Oberhausen last week to hand-deliver the honor to Paul.