He may be dead, but he's far from forgotten -- Paul is being thrust back into the spotlight as the star of a new documentary. The film, entitled 'The Life and Times of Paul the Psychic Octopus', looks at the eight-legged savant's extraordinary rise to fame during the 2010 soccer World Cup, when he successfully 'predicted' the results of eight matches in a row, including Spain's win over the Netherlands in the final.

The film investigates important questions, such as: "Was Paul really psychic?" It also examines the clairvoyant cephalopod's rise to becoming a genuinely global star.

Despite his unglamorous background as a mere Octopus vulgaris, or common octopus, Paul embarked on a remarkable career as the world's most famous psychic from his home at the Sea Life Aquarium in Oberhausen, near Duisberg in western Germany. He made his predictions on all games involving the German national team in addition to the final during the tournament in South Africa last summer by choosing a mussel from one of two transparent boxes placed on the bottom of his tank. The boxes were adorned with the flags of the two countries due to meet on the football pitch.

As his forecasts continued to come true -- including Germany's unexpected loss to Serbia in the group stage -- Paul became the focus of increasing amounts of public attention. It all culminated before the final, when he became a folk hero in Spain -- as "Pulpo Paul" -- for picking them to win. In Holland, recipes for grilled octopus began to make the rounds.

Paul passed away just a few months later, leaving a hole in the hearts of many. But his story still needed to be told, and filmmaker Alexandre Philippe, 38, has captured the riveting tale on camera. Philippe told SPIEGEL ONLINE that a love of pop culture had drawn him to the parable of Paul: "The whole phenomenon is something I have been following closely. It's an amazing story, an example of viral fame. How can an octopus become this mega-story?"

The film director's previous movie is called "The People vs. George Lucas," and examines the popularity of the "Star Wars" movies and how people see them today.

For the Paul documentary, Philippe spent four days with the "majestic" octopus -- and emerged unsure as to whether Paul was actually psychic or not. "That's a big part of the film. I am really on the fence there. It's a lot trickier that it seems. On the one hand, it could have been only a fluke. But when you talk to bookmakers and statisticians, and look at the odds of predicting eight games correctly, it's pretty mind-boggling stuff."

Indeed, one bookmaker interviewed for the film said: "Statistically speaking, he knows more than we think he knows. He'll go down in history as one of the greatest football tipsters ever."

But Philippe, originally from Geneva, Switzerland but now based in Denver, was on firmer ground when it came to why the story became so big. "The news is just so dreadful, day after day, around the world, so I think the world is always craving stories like this; an underdog story -- or rather an underoctopus story. Just everything about it is fun, " he said. "No one has really been able to do what Paul was able to do. It's charged with positive energy and feeling, and people couldn't help but embrace it."

The documentary makers were granted exclusive access to Paul, and in addition travelled across Europe talking to cephalopod experts, statisticians and bookmakers, as well as other animals that are supposedly clairvoyant. They even went to the US state of Pennsylvania to see Punxsutawney Phil, the weather-predicting groundhog made famous in the 1993 film "Groundhog Day".

The Significance of the Number Eight

But none of them can compete with the octopus, and with the opening game of the 2011 Women's World Cup in Germany set to take place on Sunday, there has been a rush to find the 'new' Paul. Philippe, however, believes the original might never be matched. "There have been a lot of animals who people have tried to get to do predictions. They're pretty bitter about the fact that Paul could do it. He could do something that no other animal or human could do."

Could there really be other forces at work? The mysterious nature of Paul's predictions doesn't stop there, as Philippe pointed out: "There's the significance of the number eight -- eight tentacles, eight matches predicted correctly, eight goals scored during the tournament by Spain. It's all very interesting."

The documentary is not the first film to be dedicated to Paul's life -- it was reported shortly after the World Cup finished last year that a Chinese production company was putting the octopus onto the silver screen in a black comedy called "The Murder of Paul the Octopus."

The legend of Paul lives on, then, with his adoring public sure to lap up the documentary. As the catchline to the film says, "One mouth, two eyes, eight arms, nine brains… Two BILLION fans." 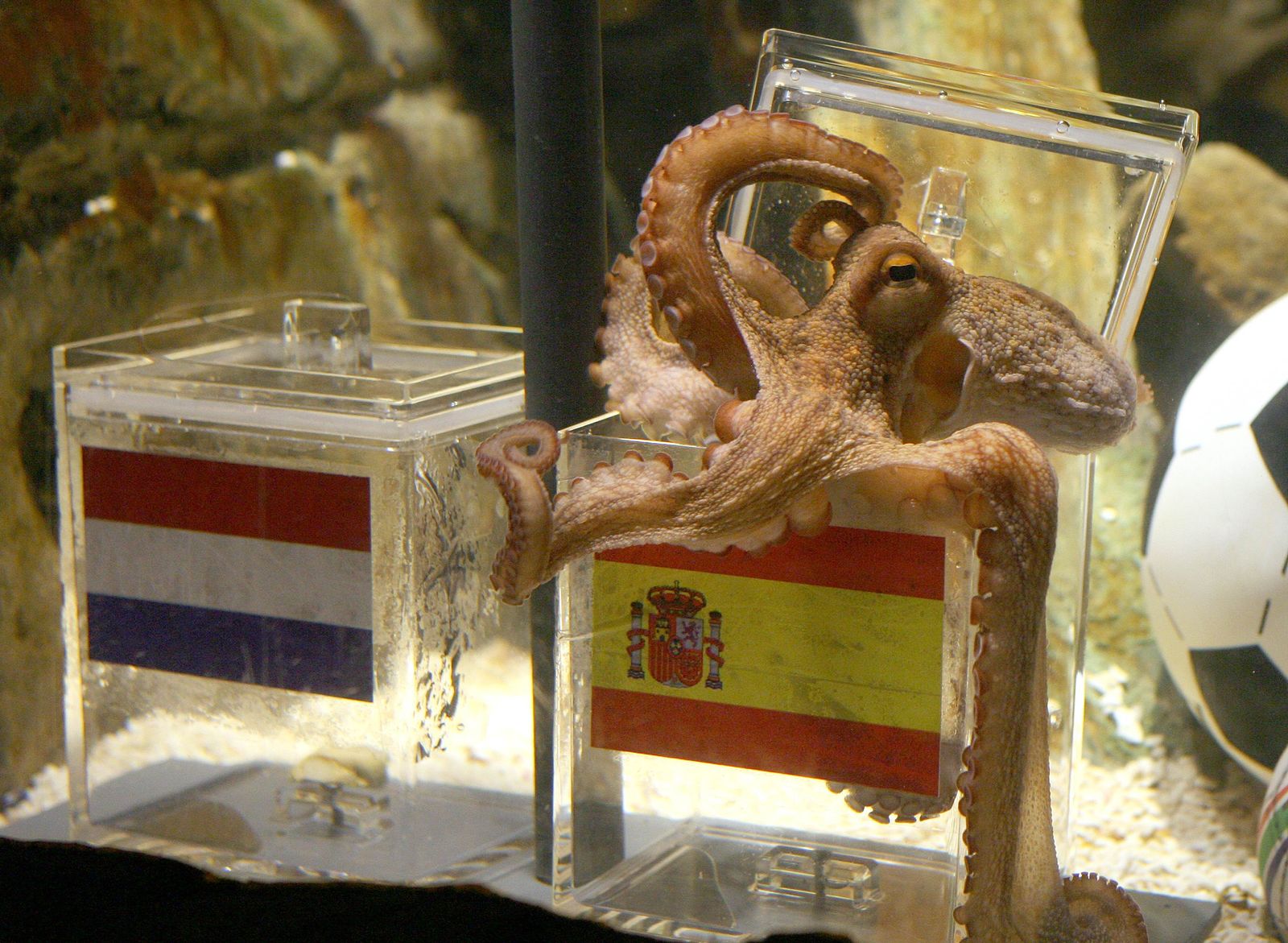 Paul the Psychic Octopus predicts Spain as the winner of the 2010 World Cup final -- correctly, as it turned out.