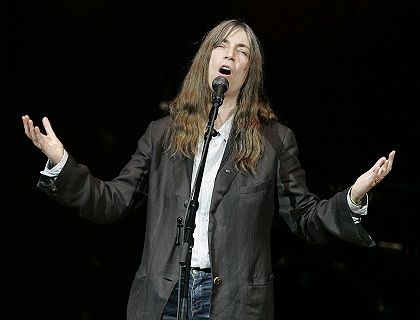 Because the night was made for torture and interrogation: Patti Smith has written a song about Murat Kurnaz.

"Take my hand, come undercover, they can't hurt you now," sang Patti Smith in her 1978 hit "Because the Night." The lyrics could certainly apply to the German-born Turkish citizen Murat Kurnaz, who is now back in Bremen after over four years in the United States detention camp at Guantanamo Bay.

Now the legendary singer-songwriter has composed a song about Kurnaz and his ordeal. The Chicago-born performer told German newspaper Der Tagesspiegel Thursday that she has every intention of releasing the song, titled "Without Chains," because of her horror at the 25-year-old's detention and treatment.

"I don't know why he was arrested and imprisoned but I have written this song for him as an emotional reaction to the whole episode," Smith told the newspaper.

"When I look at this young man ... I ask myself how I would react if my son had gone off travelling somewhere and was imprisoned by some government for five years just because they entertained some suspicions about him?"

Kurnaz was arrested in Pakistan just weeks after the Sept. 11, 2001 attacks and handed over to the US authorities. He eventually landed in Guantanamo Bay where he says he was tortured until his release without charges in August 2006.

In October 2002, German Foreign Minister Frank-Walter Steinmeier, who was then chief of staff to former Chancellor Gerhard Schröder, led a committee of German secret service officals which voted against allowing Kurnaz to return to Germany.

Last month, Steinmeier told a parliamentary committee that he blocked Kurnaz's return in light of the country's security concerns after the 9/11 attacks. He said Kurnaz, who now lives in the northern German city of Bremen, was categorised as a possible radical Islamist sleeper and security risk.

Smith's new album "Twelve," which will be released later this month, contains her covers of songs by artists including the Beatles, the Rolling Stones, Jimi Hendrix and Neil Young. Smith, who has long been known for her outspoken political views and her criticisms of the Bush administration, was inducted earlier this year into the Rock and Roll Hall of Fame.