When Oscar Niemeyer comes into his office in the morning, his manner reveals a lot about his inner composure. The driver helps him out of his dark Mercedes, and then he walks, slowly and full of dignity, along the hallway to the elevator. He is almost 100 years old, and yet much about this man doesn't seem old at all, least of all his boundless determination.

Legendary architect Niemeyer is the sole partner in a firm that constantly receives major commissions. His designs are becoming more and more daring: a museum that looks like a giant eye; a chapel standing in the ocean; a square with an 80-meter (262-foot) concrete arch spanned across it. Even today, at such an advanced age, he pursues his ideas with deep conviction. This partly explains why Oscar Niemeyer is one of the world's greatest architects.

He is omnipresent in his office on Rio's Copacabana, even when he is nowhere to be seen. Niemeyer spends much of his time sitting in his small, windowless office, surrounded by books piled up around him like a tall hedge. His needs are simple: cigarillos, coffee, models and words. Vera, his secretary for many years and now his new wife, answers the phone with pride in her voice.

His assistant, Aurélio, moves through the office, quiet as a butler. In return for Niemeyer paying his tuition while he studies architecture, Aurélio is required to read one literary work every two months and write a short summary of it for his boss. Many worlds come together in this office, but the principal source of energy is the old man in his tiny office, where there is a model of Praça do Povo (Square of the People) in Brasília. Niemeyer, sounding as proud as a young boy, says that the concrete dome is big enough to cover an entire soccer field.

Niemeyer is a living legend in Brazil. President Lula da Silva, who visited him recently, has declared 2008 the Year of Oscar Niemeyer. In the December issue of Bravo!, a magazine about culture, the author of the cover story about Niemeyer confesses that she wept when she visited his former apartment building, the Casa das Canoas, recently. The building, she wrote, nestles into nature "like a human gesture."

Niemeyer has long been a darling of the art world. Photographer Terry Richardson recently published fashion photos with his buildings as the backdrop. Iraqi-born architect Zaha Hadid references him in her works. And everyone knows that the future will never look as good again as it did with the Brazilian architect's buildings.

His architectural era began in the 1940s in Pampulha, where Niemeyer created a style that was revolutionary at the time. While Le Corbusier paid homage to the right angle, Niemeyer chose the curve. A church he designed vaulted through the landscape like some giant skateboard track. The architect later became famous for his equation: "mountains/waves/women = curves." "Oscar thinks of higher or lower things, but never simply straight ahead," says one of his closest friends, the 73-year-old physicist Ubirajara Brito.

The high point for Niemeyer came in 1956, when he was granted the greatest commission of his life. The new Brazilian capital Brasília was built in three-and-a-half years in a landscape devoid of people, in the red dust of the Cerrado savannah region.

Almost stoically, Niemeyer constantly repeats: "You may like the city or not, but you will never be able to claim that you have seen anything like it before."

With his sculptural structures, he created something his huge country was lacking: an identity. Brazil would look different today without Niemeyer. He dreams of a more just world, a world in which rich and poor live side-by-side in the same apartment buildings. Niemeyer still pins his hopes on the great revolution. At lunch, he likes to raise a toast "against Bush," and he is wildly enthusiastic about his friend Fidel Castro. "The revolution was heroic," he says, "Cubans wear it in their hearts."

Death is the End

Niemeyer still has many plans. "I do the same things I did when I was 60, so I'm only 60," he says. "You have to keep your mind alive, work, help others, laugh, cry and experience life intensively. It only lasts for a brief moment." For Niemeyer, who is an atheist, death is the end, and its approach has the effect of visibly driving him forward. "He doesn't want to talk about death," says Brito. "Oscar doesn't believe that he will die."

He used to create his designs at the drawing board. But nowadays failing vision has forced Niemeyer to reinvent his creative process. When a new project is in the works, he withdraws quietly to his office. "Architecture is in your head," he says. Niemeyer pictures the building in his mind until he is convinced that he has found the right solution. Only then does he reach for a pencil and, with a few strokes, commit his idea to paper.

He is the patriarch of a large family in which everyone respects and admires him. A visit to the photography studio of his grandson, 53-year-old Kadu Niemeyer, in downtown Rio reveals the extent of his influence on his descendants. The balcony of the 12th floor studio has a view, across a jumble of buildings, of Niemeyer's soldiers' memorial on the shore. The drawings of women on the white walls of Kadu Niemeyer's studio could only have stemmed from the hand of his grandfather. Stacks of catalogues depicting vaulted, white buildings lie on the floor, yet another sign of Oscar Niemeyer's all-pervading influence.

All four of Niemeyer's grandchildren work for him, turning his ideas into reality and managing them. Kadu's job is to reproduce the work of his grandfather. He never studied photography, but his grandfather showed him the angles from which he wanted to see his works photographed.

"He controls our lives in a positive way. He sets the right pace. When I was young, he even picked my first wife for me," says Kadu. "I don't believe that he will disappear from life. He will always be present. In 100 years, people will still know who Oscar Niemeyer was."

Who is he? Communism, for Niemeyer, has faded into something of an affectation, like having the stairwells in his buildings painted red. He likes to ignore questions about his capitalist buildings, but he holds fast to his ideals and puts them into practice. He even built a house for his chauffeur in one of the city's poor neighborhoods. 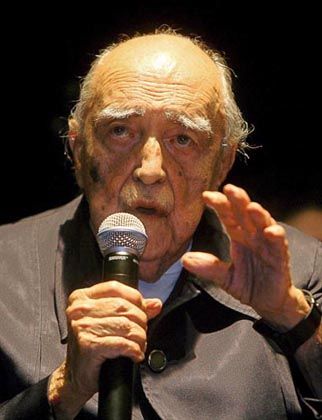 Oscar Niemeyer inaugurated his most recent building in April of this year. At 100,
he's not talking of slowing down production.

Niemeyer also helped a German architect who arrived in Rio de Janeiro in the mid-1950s and knocked on his door. Hans Müller sits at his window in Botafago and watches the activity on the street outside, the way old people sometimes do. "My wife always says to me, take Oscar as an example, he's 100!" Müller is 78.

When the young Müller first came to Rio, he had brought along a letter from the city of Berlin reminding Niemeyer of his obligation to design a building for the city's Hansaviertel district. When Müller handed over the letter, Niemeyer said: "You need work? Then stay here!"

He took Niemeyer's advice and ended up working for him for almost half a century. When Brazil's dream of equality fell apart and a military government took over, Müller accompanied the master into exile in Europe.

Once in Europe, Niemeyer created his own little Rio, hosting groups of men and spending long nights smoking and playing cards. A poor card player, Niemeyer liked to keep a few extra trump cards in his pocket. Müller tells stories of a wild life in Paris. "We shared everything, and once we even had the same woman. Oscar thinks about women constantly."

Lewd remarks are part of Niemeyer's language. He points to a picture above his desk depicting two vaginas, two breasts and a pair of buttocks, and says: "It must have been fun taking that picture." At the same time, Niemeyer has a fondness for transfiguring women into exalted beings and lyrical objects.

A Niemeyer drawing of nude women dancing adorns the façade of the new theater in Niterói, across the bay from Rio. They symbolize his quest for beauty and surprise. If there could be no political revolution, Niemeyer at least wanted to be revolutionary in his architecture. The poet Ferreira Gullar puts it this way: "It isn't enough to solve people's social problems. They need beauty. Oscar makes life more beautiful."

The art museum in Niterói looks like an elegant spaceship in perfect harmony with its natural surroundings. Like many of Niemeyer's works, the building has become a symbol of the city. Visitors often stand in front of it, so spellbound that they forget to go inside. Niemeyer supposedly sketched the design over lunch at a steakhouse. His art manages to be both unexpected and popular at the same time. The most important aspect of his architecture is not its technical audacity but its soul. He wants people to feel it and experience it.

No One left indifferent

He often creates a curved ramp, a sort of architectural gangway, from which one can observe the building from several different angles before going inside. Even more impressive is the open space Niemeyer integrates into his designs. The space between structures creates a field of tension, which has to be filled -- with thoughts and emotions. This is one of the reasons that no one is left indifferent by Brasília.

Oscar Niemeyer never wanted to live in Brasília. He would have missed Rio's chaos. He is now in the process of developing a new magazine. He never stops adding new elements to his life -- as if doing so could prolong it.

Niemeyer has a specific concept of death. He portrayed it most beautifully in his autobiography, where he describes, on a drive from Rio to Brasília, seeing sensual hips and breasts in cloud formations as they gradually dissipated. "And I felt that this perverse metamorphosis resembles our own fate. We have no choice. We are born, we grow up, we fight, we die and we disappear forever."

Five years ago Niemeyer had the carpeting removed from his office and white tiles installed in its place. When the work was finished, he was satisfied with the result and said: "Now the office is set up for the next 10 years."