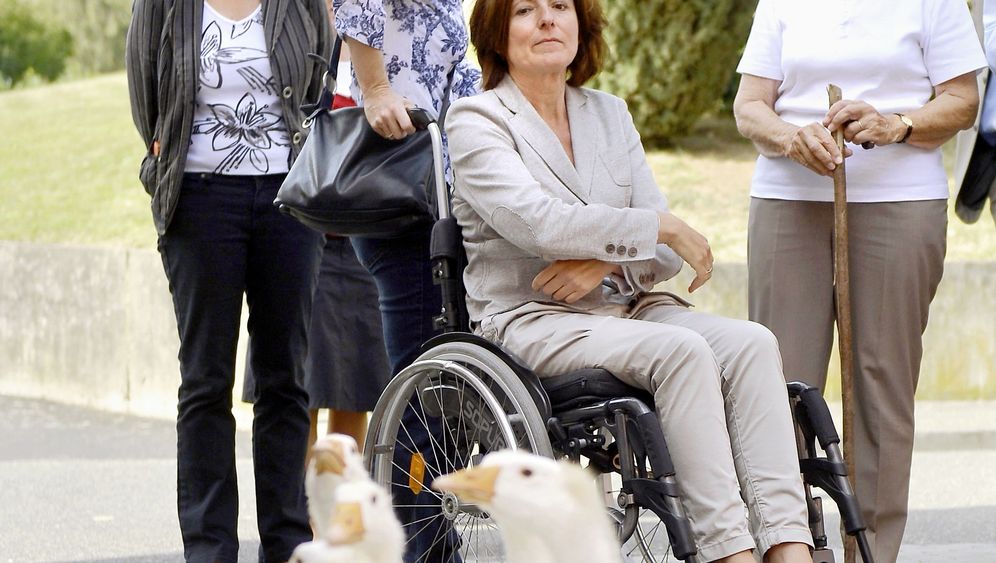 Photo Gallery: The Power of Disability

German Finance Minister Wolfgang Schäuble uses a wheelchair. Malu Dreyer, who will soon take over as governor of Rhineland-Palatinate, is also confined to a wheelchair. So are former chancellors Helmut Schmidt and Helmut Kohl. Indeed, German politics in the last few weeks have been full of wheelchairs.

For Kohl and Schmidt, as elderly former statesmen who continue to influence the country's political life through their historical roles or their comments, mobility is largely immaterial on the public stage.

Schäuble, on the other hand, occupies a key cabinet position while Dreyer is on the eve of her greatest political challenge yet. Given the stresses placed on today's top politicians, the physical limitations these politicians face is very much relevant to the positions they occupy.

For many years, politicians' physical ailments were handled with a degree of discomfiture. When then-Defense Minister Peter Struck suffered a stroke in 2004, initially he didn't talk about it at all, but simply pretended to be healthy, sometimes to bizarre effect. Struck was determined to avoid any doubts being cast on his ability to do his job.

Not quite a decade later, Malu Dreyer has no such problem. She is upfront about the fact that she has multiple sclerosis. She says simply: "I feel strong and I feel healthy."

There are moments when our view of humanity changes radically in a very short span of time. The year 2012 is one such time: Our definition of physical normality is changing and expanding to include people with disabilities.

The Equality between Them

This year has delivered no less than three new stories of people with disabilities, all of which emphasize not the difference between the able-bodied and the disabled, but the equality between them.

First, French film "The Intouchables" opened in movie theaters across Germany. The film portrays quadriplegic Philippe, who chooses as his caretaker not a professional nursing assistant, but instead a tough young man from the projects, Driss, because Philippe knows Driss won't pity him. Together the two men do things that are simply fun, such as speeding through the city in a Maserati and having sex with beautiful women -- the sort of things men dream about, whether disabled or not.

Around 9 million Germans watched this film. They shed a few tears, but more importantly they laughed over the amusing adventures of Driss and his paralyzed boss. The movie offered a light-hearted, cheerful story from the wheelchair world.

Then this summer, billboards went up around Germany showing athletes with disabilities, people who were missing limbs, but still looked strong and beautiful. The Paralympics were taking place in London and the games were well attended, for the first time becoming a festive, major celebration of sports for people with disabilities. In fact, the competition was a major celebration of sports in general, with the word "disability" fading into the background. The athletes who competed in London performed exceptional feats. Period.

This blurring of the distinction between "normal" and "disabled" was particularly clear in the case of South African sprinter Oscar Pistorius. The double amputee has carbon fiber prosthetics below both knees, and he also competed in the "normal" Olympic Games in London this summer, making it to the 400-meter semifinals. That means Pistorius is one of the 16 best sprinters in the world over that distance.

The third of this year's three stories comes courtesy of German Finance Minister Wolfgang Schäuble, who has proved himself more than equal to the challenges of high-level politics. There had been doubts in previous years, because Schäuble's disability meant he was occasionally unable to fulfill his role. But the finance minister has so far coped with this euro crisis year of 2012 as well as any of his colleagues from the other euro-zone member states.

Politics in general demand not just normalcy, but super-normalcy. Politicians are expected to be how others dream they would be if they could live up to their own ideals: moral, modest, hard working, clever. The job calls for perfection, for politicians to be superhuman beings in human form, and it's an image that doesn't seem to allow room for physical disability. But Wolfgang Schäuble has changed all that, becoming very much a normal player in the arena of politics. In doing so, he also paved the way for Malu Dreyer.

All these stories offer a clear message: The emancipation movement for people with disabilities has reached a new level. For years, the focus was primarily on accepting their particular differences, making daily life livable by installing curb cuts and auditory cues at crosswalks. Now it's far more a matter of accepting their normalcy.

One example is a billboard that can be seen around Berlin at the moment, promoting inclusion in the form of mainstreamed school classes including both disabled and able-bodied children. The image shows a boy in a wheelchair, and a girl without one. The two are clearly already close, love in the air, and a kiss between these two attractive teenagers seems inevitable. Just as clear is that it will be a kiss between equals.

In fact, this hints at the next stage to come in the emancipation movement: Not only can people with disabilities be equal to able-bodied people, they may also enjoy certain advantages. Wolfgang Schäuble doesn't need to impress his sincerity upon voters -- his wheelchair, a reminder that he was the victim of an assassination attempt in 1990 while on the campaign trail, does that for him.

That's just one small factor, though, and one Schäuble surely would be happy to do without it were he to regain his mobility. The matter of special advantage was a much larger factor Pistorius' case, leading to long debates over whether he should be allowed to compete against able-bodied athletes, or if his prosthetics gave him an unfair advantage. The sprinters at the Paralympics, with their cool pride and elegant strides, very nearly gave the impression that this could be the start of a new avant garde: the power of disability.

Movies have long suggested that hybrids of humans and machines can have distinct advantages. "RoboCop" was one example, and "Terminator" too combined human qualities with technology. Taking that idea a little further, it's possible to imagine people might one day cut off their uninjured legs simply because prosthetics make them faster, more agile and more beautiful. Oscar Pistorius, today known as disabled, would become the forerunner of a new and improved human being.

An absurd idea? Cosmetic surgery already thrives on such absurdities. And many a dentist can tell of patients who ask to have healthy teeth extracted, because they believe dental prostheses will give them a more beautiful smile.

Our image of humanity, once relatively static will, thanks to technology, begin to change even more quickly. It's only been a few years since we first discovered an instrument that allows us to stay connected permanently -- and already there is hardly such a thing as a human being without a cell phone in hand. In a sense, we are practically hybrids already. This is our new normalcy.

"Normalcy" is a fluid term in any case. It has no set form, but changes over time, with each generation determining anew what qualifies as normal. And right now, disability is being absorbed into our concept of normalcy.

Films, athletes and politicians all help facilitate this process, but it's important to bear in mind that these represent a highly polished version of disability. "The Intouchables" portrays a rich man who can afford to pay for a great deal of assistance, and both Oscar Pistorius and Wolfgang Schäuble are also privileged in the sense that they benefit from the support of the prosthetics industry or the government, and that support is part of what allows them to achieve so much.

Daily life for people with disabilities can still be arduous. Many of them still need help, some actively suffer. Mobility remains an issue, and a body subjected to more strain sometimes reacts with pain or illness. In other words, this is still a matter of "despite" -- despite these disadvantages, a person with a disability can achieve great things, be beautiful and have fun. It is a hard-won normalcy.

But just because something is possible, does that mean it must be done? These dramatic changes in our concept of what humans are will have an effect on the entire emotional life of our society. Faced with weakness in others, those who are stronger often react with compassion and a willingness to help. As people with disabilities excel in the fields of politics and sports, they leave the ranks of the weak -- and as that portion of society shrinks, so too does our compassion and our willingness to help. Similarly, as women bade farewell to the role of "weaker sex," the courtesy expressed by many men dwindled as well.

Without weakness, a society becomes ruder. Or, put another way, as normalcy expands, so does the idea of achievement, which pervades this society. With people such as Pistorius and Schäuble as role models, expectations for all people with disabilities increase: If these two can accomplish so much, why can't others do the same?

This is not necessarily a negative development. Many people with disabilities dislike sympathy that can easily slip into pity, and the special treatment that relegates them to the sidelines. They don't want political correctness or discriminatory special protections, and it's okay to laugh, as in the case of "The Intouchables."

Still, society needs to learn to recognize certain distinctions -- there are still people with disabilities who are not high-performers within their own lives, people who still need compassion and help from others.

Yet in the high-powered arena of politics, a nation can only afford so much leniency. Ultimately, the government as a whole is more important than the heart or back of one top politician. It sounds merciless, but it is a state of affairs that is necessary for a society to function. That is the normalcy of politics.