The star of a new stage show in Berlin this week is an Opel Kadet E. Two men stroll onstage and start drumming on the hood, slamming the doors, abusing the car with sledgehammers and saws or scraping the paint with sandpaper. It takes 90 minutes to reduce the car to junk, but in the process Christian von Richthofen and his partner produce an astonishing variety of music, from bossa nova rhythms to Mozart.

Von Richthofen is a composer, actor and teacher who developed the art of automotive percussion during a workshop in Hamburg for juvenile delinquents. He thought drawing on the sound of vandalized cars might be a way to interest kids in music. The show caught on, and he's toured it as a commercial venture throughout Germany.

An Opel Kadet E, says von Richthofen, is "the Steinway of concert cars." He's arrived at this conclusion by testing a wide variety of models, both in workshops and in German junkyards. Unfortunately, since "Auto Auto!" demands the sacrifice of one Opel per engagement, supply can run short. He's been known to make do with other models -- a Nissan Micra here, a Vauxhall Astra there. (The Vauxhall is his favorite car to play outside Germany.) 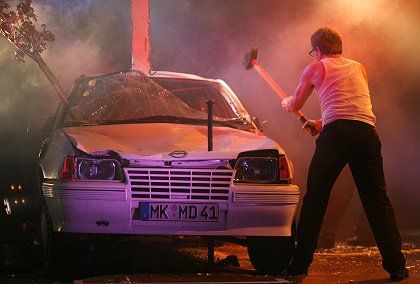 Lay off my auto.

"Auto Auto!" has a lot in common with other drumming spectacles like "Blue Man Group" or "Stomp." And it's not strictly a two-man show. Pre-recorded orchestral music rises in the background to accompany the percussion. Von Richthofen says he'd like to play with a live orchestra, but so far, according to the Berliner Zeitung, no classical-music outfit has agreed to share a stage with him.

He's a classically trained percussionist and he is distantly related to Manfred von Richthofen, the infamous World War I pilot known as the "Red Baron." He even has a few latter-day enemies of his own: Members of Opel fan clubs in Germany have refused to attend his shows on "ideological grounds," as von Richthofen puts it. The fans complain that his shows create a shortage of spare parts for their old, collectible cars.

"We have been attacked on more than one occasion and often receive death threats," von Richthofen said to a Scottish journalist when his show traveled to the Edinburgh Fringe Festival last year -- though he wasn't referring specifically to Opel fans. "One person threatened to come to my house and smash up my car. I said to my colleagues, 'Let the motherfucker come, I've only got a bicycle!'"