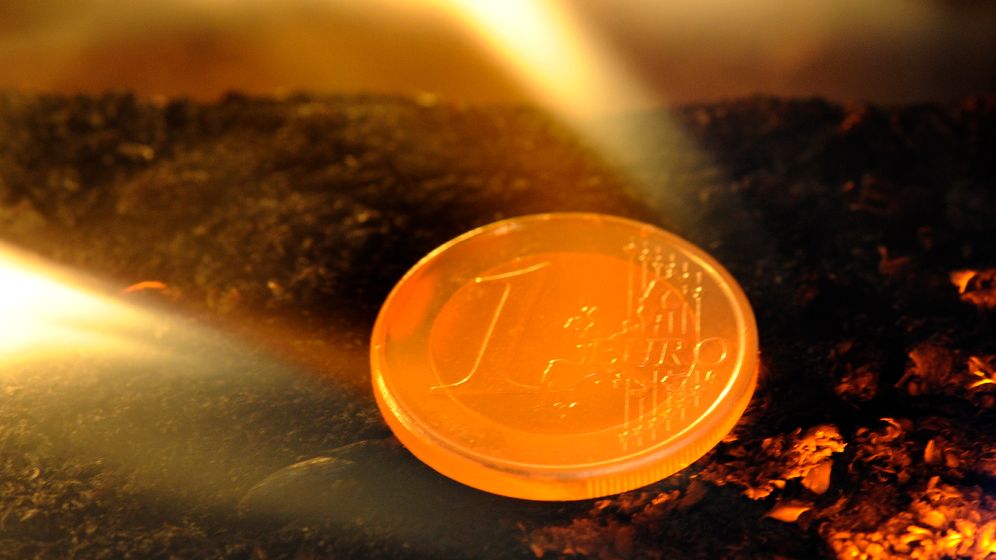 Two years ago, when Greece's future in the euro zone was in serious doubt for the first time, Julian Stratenschulte showed how brittle the currency really is. He took a hammer and whacked a Greek one-euro coin. His first blow sent the central segment with the silver owl spinning out of its casing.

"It was easier than I thought," he recalls. Scores of media outlets published the photo.

Stratenschulte is a photographer with the German news agency DPA. He has been photographing euro coins from various angles for the past three years. He tries to convey the complex crisis in images. The problem is that the crisis won't end, which means Stratenschulte has to keep coming up with fresh ideas.

His colleagues have resorted to using children's toys, arranging a plastic shark to look like it's eating a Lego man holding a Greek flag. They have photographed coins in a free fall. Rumor has it that one photographer poured gasoline on coins to try to make them glow with heat.

Photographers call such images illustrations, they use them to help visualize abstract events. Most crises don't hold the public's attention for more than a few weeks or months, but it has been different with the ongoing euro-zone debt debacle. Stratenschulte has had enough of it.

"It is difficult to keep finding a new approach," he says. "I'm glad the euro coins have different designs in each country. That makes it possible to vary things at least a bit."

Lighting effects can help. "A euro coin that is half in shadow immediately looks far more dramatic," he says. When Spain and Italy came under pressure in financial markets a few weeks ago, Stratenschulte lit sparklers and placed them behind two euro coins standing on their edges. The head of King Juan Carlos and the Leonarda da Vinci's Vitruvian Man stood in a sea of sparks.

'Newspapers Have Become Bolder in Their Choice of Images'

News agencies supply media outlets with information and photos, and news websites and newspapers decide which images to publish. Once, Stratenschulte photographed coins that he had half-submerged in water. He found it a bit heavy-handed and was surprised that some outlets published it.

"I think people's acceptance threshold has gone down," he says. "Newspapers have become bolder in their choice of images."

Stratenschulte was 16 when the euro replaced the German mark. At the time he collected euro coins from various euro countries. He's pleased he did. The coins have been coming in handy.

Oliver Berg, another DPA photographer, has no such collection. He went around to banks looking for Greek coins, but they only had notes. He scoured all Greek grocery stores and restaurants in his hometown of Cologne, but their foreign euro coins were from the Netherlands or France. When he came across a gas station cashier filling a bag with coins he asked her if he could check for a Greek one. He found two.

Since then Berg keeps the treasured euros in his office drawer. He wouldn't dream of breaking them because no one knows how long the Greek drama will continue. His stash includes coins from other troubled nations like Spain, Italy and Ireland.

A Dab of Toothpaste

When he gets a freshly minted euro in shops, he holds on to it because shiny money makes for better images than scratched coins. "The bank advised me to polish them with toothpaste," says Berg.

Berg, too, experiments with his coins. He was sitting in his office trying to come up with an idea when he spotted an orange First Aid box. He put a euro coin behind the German word for "Aid" and pressed the shutter release.

"That was pretty flat picture," he says, almost apologetically. "But then I saw it on several websites."

Once, while visiting a friend, he saw a toy ship belonging to the man's son. He borrowed the little plastic life preserver, placed a euro inside it and -- presto! --another crisis image.

Berg, like Stratenschulte, has tried to remove the silver circle from the coin. Instead of a hammer he used pliers -- and came to the same conclusion as his colleague.

"It was astonishingly easy," he says.