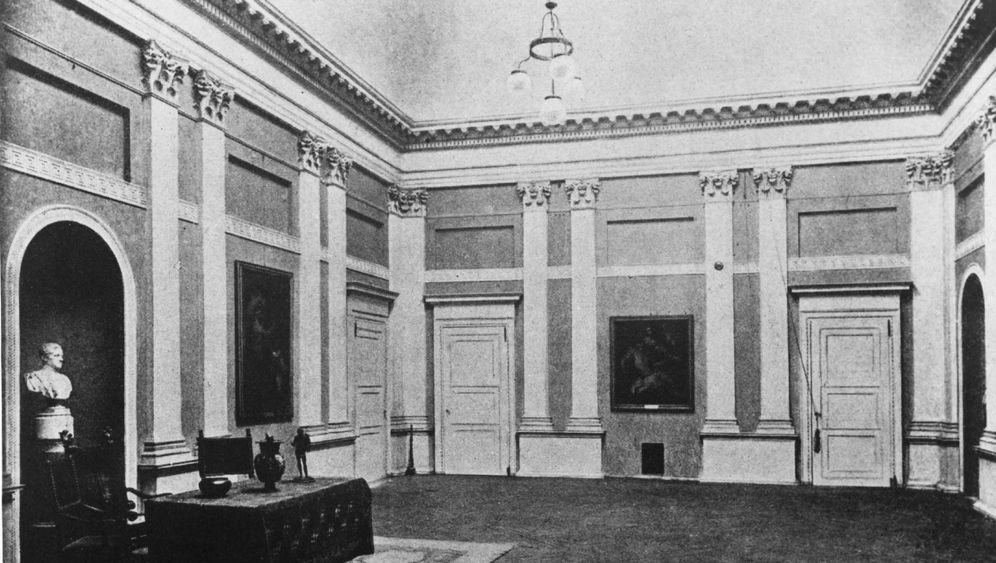 The riddle began 10 years ago, when Ralf Peters stumbled across an old box full of photographs in a cabinet at the Central Institute of Art History in Munich. Peters, an art history Ph.D., had just begun a new job at the institute and was trying to get an idea as to what the archive might contain. Little did he know that the box he found during his first days on the job would preoccupy him and his colleagues for years to come.

Inside the box were 600 undated black-and-white images. They were disorganized and appeared on no inventory lists. "Nobody knew what they were doing inside the cabinet," Peters recalls. "They weren't in good condition."

The images were of burned out residences, destroyed monuments and crumbled palaces, all taken in Italy during World War II. Peters was initially flummoxed as to the photos' provenance: Who took the pictures? When exactly? And, most importantly, to what end? Peters spent years searching for the answers to these questions, and ultimately they were to provide a unique look at Nazi war propaganda as the Allies inexorably pushed the Germans out of Italy in 1943 and 1944.

The Allies landed on Sicily in July 1943 and quickly gained the upper hand on the Italian troops. Indeed, it wasn't long before their advance resulted in the toppling of fascist Italian dictator Benito Mussolini. The new government quickly changed sides, leading the Germans to declare war on their erstwhile brothers in arms. The Nazis established a puppet regime in northern Italy to resist the advancing Allies.

From the point of view of Germany's military, the situation was serious. But the Nazis in Berlin then made what must be regarded as one of the most out-of-character decisions of World War II. Despite having spent years disregarding even the most basic elements of the 1899 Hague Conventions -- pillaging and murdering their way through Europe -- the Nazis decided to send German art historians to Italy to fulfil an article of the conventions which called for invading powers to ensure that cultural treasures in occupied territory be protected.

The "art preservation unit," as it was named, was funded out of the military budget and included the famous German art historian Ludwig Heydenreich, who in 1947 would become the founding director of the Central Institute of Art History in Munich.

Initially, the experts assembled lists of cultural sites that were to be protected, even preventing certain buildings from being used by the military. Stupendous frescoes, intricately designed columns or even entire building facades were covered up. Priceless paintings and sculptures were brought to safety.

But where did the pictures of ruins found by Peters come from? "There is a striking difference between the art protection measures pursued in France and those undertaken in Italy," Peters says. "In France, the intact buildings were documented. In Italy, only the destroyed ones."

The Propaganda Power of Images

The images bear witness to the slow shift away from art preservation and toward Nazi regime propaganda undertaken by the German art historians active in Italy during the war. Despite their efforts, many of the monuments and buildings they sought to protect were destroyed by the Allies. The Germans themselves were pushed ever further into northern Italy. Before long, the German military and the Nazi propaganda machinery recognized the potential of using the destroyed buildings to portray the Allies as culturally insensitive barbarians. The US, after all, used a similar strategy on the other side of the front, erecting signs in front of destroyed architectural pearls reading "Destroyed by the Germans."

Before long, says Peters, the unit once responsible for protecting Italy's cultural heritage began delivering images of emotional images depicting devastated palaces, churches reduced to heaps of rubble and shattered sculptures. Accompanying text ensured that the message of the images was not misunderstood. Often, the images were produced by photographers belonging to so-called propaganda companies and they would end up in brochures depicting sites both before and after their destruction.

Heydenreich also took part in the propaganda war in Italy. He had hundreds of pictures taken and wrote contributions for brochures on "the war against art" in which he spoke of the "enemy terror attacks." After the war, the Americans appointed him to head the Munich art history institute and his 1,600 photos came with him.

"I can understand much of what Heydenreich did, particularly his wholehearted efforts to protect historically significant structures," says Peters. "But he also clearly served propaganda."

An exhibit at the Central Institute of Art History in Munich showing selected photos taken by Germany's "art preservation unit" in Italy runs until the 25th of this month.