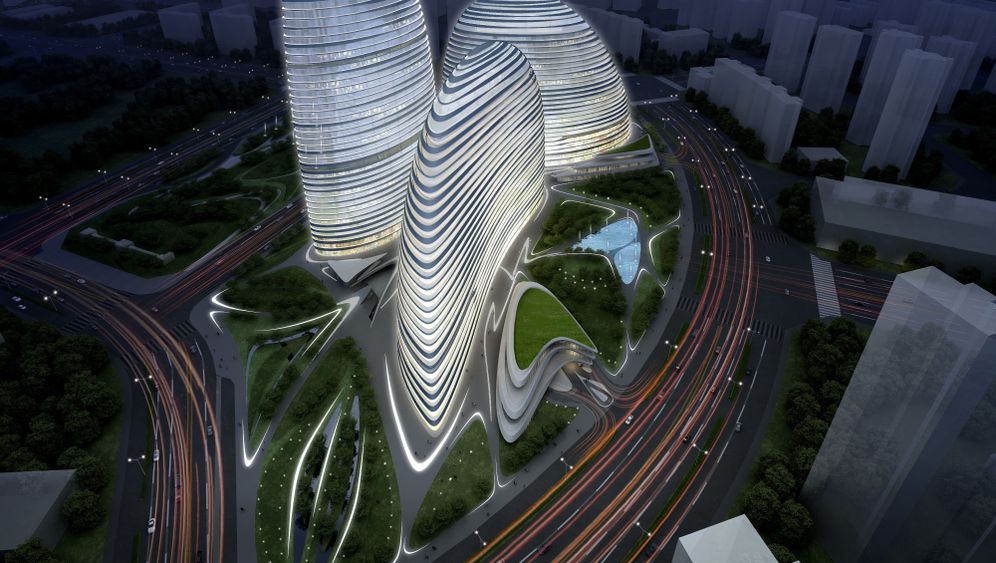 London-based Zaha Hadid, widely regarded as one of the leading lights in the constellation of avant-garde architecture, has likewise become a superstar in China, where her latest designs radiate out through architecture schools and studios across the country. On a recent trip to Beijing, 15,000 artists, architects and other fans swarmed to a talk she gave for the opening of the futuristic Galaxy SOHO complex -- just one of 11 projects she is designing across the country.

But the appeal of the Prtizker Prize winner's experimental architecture, especially since the unveiling of her glowing, crystalline Guangzhou Opera House two years ago, has expanded so explosively that a contingent of pirate architects and construction teams in southern China is now building a carbon copy of one of Hadid's Beijing projects.

What's worse, Hadid said in an interview, she is now being forced to race these pirates to complete her original project first.

The project being pirated is the Wangjing SOHO, a complex of three towers that resemble curved sails, sculpted in stone and etched with wave-like aluminum bands, that appear to swim across the surface of the Earth when viewed from the air.

Zhang Xin, the billionaire property developer who heads SOHO China and commissioned Hadid to design the complex, lashed out against the pirates during the Galaxy opening: "Even as we build one of Zaha's projects, it is being replicated in Chongqing," a megacity near the eastern edge of the Tibetan plateau. At this point in time, she added, the pirates of Chongqing are building faster than SOHO. The original is set for completion in 2014.

'China Can Copy Anything'

Zhang has issued an open appeal for help in combatting this massive, open counterfeiting operation, and lamented: "Everyone says that China is a great copycat country, and that it can copy anything."

Piracy is pervasive in China, where counterfeit iPods, iPhones and iPads are sold openly, and even entire fake Apple stores have proliferated across upwardly mobile cities. Although China has, on paper at least, a series of laws to protect intellectual property, enforcement of these rules is wildly sporadic.

Yet You Yunting, a Shanghai-based lawyer who founded an online journal covering intellectual property issues, said China's copyright law includes protection for works of architecture. You said he has studied the copying of the Hadid project, and added: "The two versions of the complex are quite similar."

"SOHO could have a good chance of winning litigation in this case," he predicted. "But even if the judge rules in favor of SOHO, the court will not force the defendant to pull the building down. But it could order the payment of compensation."

Zaha Hadid is not the first Westerner to see her architecture mimicked in China. Last year, citizens of the Austrian hillside hamlet of Hallstatt were shocked when they inadvertently discovered Chinese architects had surreptitiously and extensively photographed their homes and were building a doppelgänger version of the UNESCO World Heritage site in southern China.

Hans-Jörg Kaiser, an Austrian representative on the International Council on Monuments and Sites, which advises UNESCO on heritage preservation, said Halstatt residents were quite upset that their homes were being secretly cloned half a world away.

'As Easy as Photoshop'

Chinese architects involved in replicating the Austrian town, wedged between snow-covered peaks and a vast high-elevation lake, apparently created the simulacrum of Halstatt by using imagery software to create an intricate montage of the site, and then transformed these images into a 3D model.

The initial outcry among the people of Halstatt against the secretive mapping of their homes has since subsided, said Kaiser, who added he did not discover any UNESCO rules that could have prevented the replication of the World Heritage site.

Dutch architect Rem Koolhaas, who designed Beijing's surreal, next-generation CCTV tower, has stated the super-speed expansion of Chinese cities is producing architects who use laptops to quickly cut and paste buildings into existence. Koolhaas, in the book "Mutations," calls these architects Photoshop designers: "Photoshop allows us to make collages of photographs -- (and) this is the essence of (China's) architectural and urban production…. Design today becomes as easy as Photoshop, even on the scale of a city."

Satoshi Ohashi, project director at Zaha Hadid Architects for the SOHO complex that is now being cloned, said: "It is possible that the Chongqing pirates got hold of some digital files or renderings of the project." From these, he added, "you could work out a similar building if you are technically very capable, but this would only be a rough simulation of the architecture."

One SOHO executive identified the property developer accused of pirating the design of the Hadid project as Chongqing Meiquan. When contacted by telephone, a Chongqing Meiquan official declined to comment on the case.

Zaha Hadid said she has a philosophical stance on the replication of her designs: If future generations of these cloned buildings display innovative mutations, "that could be quite exciting."

An entire generation of new-millennium Chinese architects has been tracking, and been inspired by, Hadid's architectural advances, said Beijing-based Ohashi. He also predicted a rise of a new class of pirate architects with a sophisticated focus on the globe's leading experimental buildings: "If someone really likes Zaha, we will probably see more of her designs across China," he says.

And the ability to bounce images, renderings, and even leading-edge 3D models of architectural designs around the globe at the speed of light via the Internet will aid not only avant-garde architecture teams from Beijing to London working together on joint projects, but also pirate architects who aim to build skyscrapers or even cities at a lightning pace.

Could there one day appear an entire Chinese cosmopolis populated by mutant versions of the cool crystal-shaped cultural centers crafted by Zaha Hadid? Could China see the proliferation of 10 or 20 architectural clones of the Guangzhou Opera House spread out across its leading megacities?

"I am sure," said Ohashi, "that some architect is already working on another version of the Guangzhou Opera House."