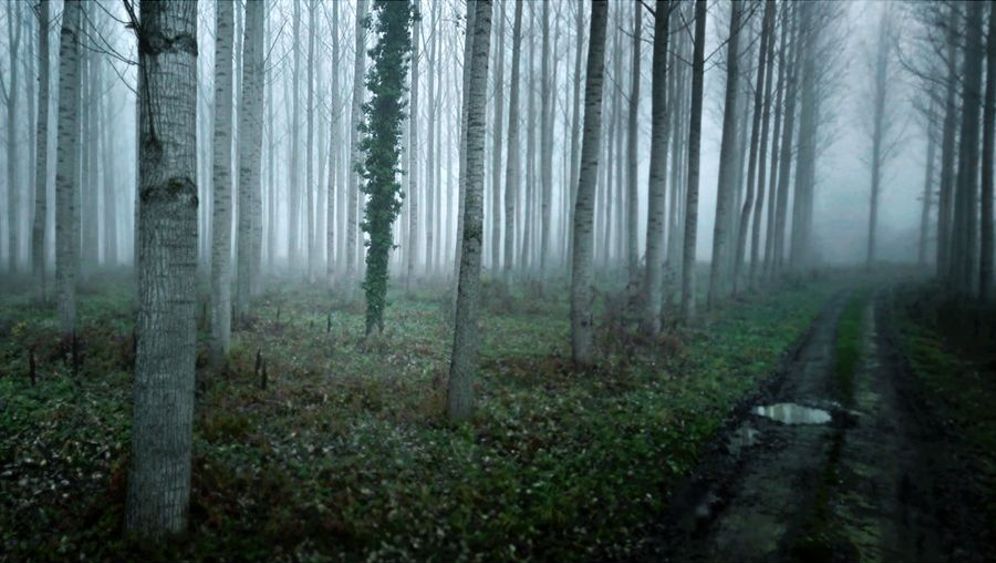 SPIEGEL ONLINE: Mr. Hobson, you didn't photograph your latest series of photos yourself -- they came from Google's Street View service. How did that come about?

Hobson: I began working on a film I was asked to direct by a producer in Los Angeles. I am unfamiliar with Los Angeles. Since that is where we are going to shoot the film, I begen to use Google Street View to do the location scouting for the project. I spent countless hours traveling the streets of L.A. in search of locations ideal for each scene. I was simply amazed at how much area was photographed by the Google cars. There wasn't an alley or street in L.A. that I could not 'drive' down and look in every direction every 15 feet for a shot.

SPIEGEL ONLINE: Los Angeles? It seems like you were looking for an escape. Your 'GSV Cinemascapes' often show odd places in remote parts of the world.

Hobson: After location scouting I began to explore other places around the globe for my amusement. After a few days I was addicted to this virtual world of travel. I would start on a remote road in Norway, for example, and just go forward on it for miles and miles, hour after hour. I would become immersed and 'lost' in this world. Then I began to explore more remote locations. I live in a remote location myself, and I wanted to find other places similar to where I live.

SPIEGEL ONLINE: It sounds like a nice leisure activity, how did it eventually become work too?

Hobson: After hours and hours of driving through empty countrysides, tundras, and deserts, I began to put together a dozen or more locations that matched my aesthetic appeal and narrative. I decided to turn my gaze outward at the world and the isolation of other people and places through the Google technology. This process is about the amazing technology of Google Street View and the places it has allowed anyone with a computer and internet access to explore. I am trying to share remote locations of splendor and beauty, places of isolation where life is difficult and slower being so far removed from large societies.

SPIEGEL ONLINE: The photos are the latest works in the Cinemescapes series you began in 2007. Most of these were self portraits. Why?

Hobson: I picked up a camera for the first time in 2007 after seven years of living in the remote Adirondack Mountains of New York state near the Canadian border. I had started a family and settled down to a permanent full-time job. The slow pace of life up here allowed me to reflect on my life and particularly my younger days of turmoil, drugs, and trouble. I started to photograph myself in isolated and emotional narratives as a way of releasing those memories and feelings. It was a visual diary of sorts since I am not good at writing and found the process of photography to be very fulfilling.

SPIEGEL ONLINE: The images have a narrative quality with a cinematic touch. Were they successful?

Hobson: They were never intentionally developed for the world in general or made for anyone other than me and friends I had on social networking sites such as Flickr. In 2007, they went viral on the internet just like the Google Street View images are now. I had moderate success in that I was able to travel and exhibit these personal photographs in galleries from London, New York to Los Angeles. There were articles in numerous well-known art publications and websites as well.

SPIEGEL ONLINE: What triggered the online excitement over your latest images?

Hobson: I don't know. The internet can work like a flash flood sometimes, and in this case it can cause damage as well. My website has been struggling to stay on its legs from all the traffic and almost every other visitor has encountered an error of website overload issues. It's just the world we live in now, I suppose. Information can be shared and explored in an instant anywhere across the globe. It's quite amazing.

SPIEGEL ONLINE: You've received the most attention from Spain, France Italy and Germany. Why do you think that is?

Hobson: My 2007-2010 work did achieve fairly high attention before, appearing in numerous interviews and articles in magazines and newspapers across Europe. I'm not quite sure why that is. Maybe it doesn't work in the US because the cinematic influences don't stem from Jean-Claude Van Damme, or because they aren't overtly graphic and over the top. They are subtle and need to be explored in a more cerebral manner.

Hobson: Yes, they do. They are a continuation of that original work, or a finalization. It went from the world viewing me in images, to me viewing the world. My process is quite simple and true to the original source. I don't alter by adding, removing, or excessively retouching. I spend probably 10 minutes processing each of the GSV images after gathering them from the street view. These are 2-3 screen captures then stitched together to make the panoramic format. The signature look that I try to achieve in each of my images is to enhance the mood and atmosphere in three different areas: lighting, color, and depth of focus.

SPIEGEL ONLINE: Working with photos like these is different than using the camera yourself. Do the pictures feel like your own work, or do you feel less ownership of them?

Hobson: I attribute a ton of it to Google technology. They are amazing and I truly love what they are doing with this project of canvasing the earth. They feel like my own in that it is more about the process of making them that matters to me than the final product. I don't have my photos hanging on my walls and I don't look at them very often. The best part for me is the creation, after that, it is viewers who can decide if they enjoy them or not. So no, I did not go to these places in real life and take these photos, but I feel connected to some of these towns and became familiar with their streets, houses and people in a bizarre virtual reality that is hard to describe. It's silly to describe how it feels to travel around central France for a week on Google Street View, and how if I happened upon the same town or street and recognized the people that are there, I would want to say hello to them as if I know them. Sounds crazy.

SPIEGEL ONLINE: Do you have plans to continue the project?

Hobson: I have already benefited from this experience and continue to do so with occasional trips to select villages and posting the photos like a travel album for friends to view via my Facebook fan page or Tumblr. I hope more people will enjoy the work and go explore the world of Google Street View. If I had advice on optimal viewing for the best experience, it would be to have a 27-inch iMac, a dark room, and a bottle of wine -- preferably Medoc or Bordeaux.