Knut has been pining for his keeper Thomas Dörflein who has been given three days' vacation from his round-the-clock care for the superstar polar bear cub ahead of Easter.

"It's like with any small child left alone at the kindergarten for the first time," Berlin Zoo's bear expert Heiner Klös told SPIEGEL ONLINE. "Bears don't cry but Knut looked for him for a while and then sulked around a bit and wasn't amused. But he calmed down today. He'll be extremely happy to see Dörflein this evening, he's coming in to check up on him."

The close bond between the two has been evident ever since Knut's first public appearance on March 23, even though other keepers have joined Dörflein during Knut's daily outings.

Knut follows the bearded keeper around the enclosure during his public appearance. The little bear also sucks on Dörflein's hand, climbs up his leg, jumps on his shoulder and even bites him playfully, causing Dörflein to wince with pain.

Dörflein often wraps him in a green blanket and tosses him around, and has the fondness of a parent in his eyes as he watches the bundle of fur play with an array of toys including a soccer ball, a rubber bone and a wicker basket.

On Monday, the first day of Dörflein's break, Knut scampered away from his other keepers towards the entrance to the enclosure, clearly waiting for Dörflein. In the wild, polar bear cubs stay with their mothers for almost three years. 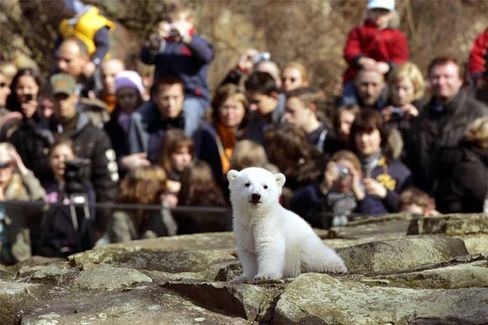 Knut is pining for his keeper Thomas Dörflein, who is on vacation.

Klös said Dörflein has been doing a great job nurturing Knut since the bear was rejected by his mother at birth in December.

He has been sleeping in Knut's cage and getting up at night to feed him a special fortified porridge.

Dörflein's care has clearly worked. The bear cub is putting on about 200 grams a day and is looking healthy and chubby.

Dörflein will be back in time for Easter, said Klös.

Meanwhile Knut's fame, like the bear himself, continues to grow with each passing day. Last weekend 45,000 people came to see him, said Klös, who gave a tentative forecast that the polar bear alone may draw in an additional 300,000 visitors in 2007. Last year Berlin Zoo had 2.5 million visitors.

Coach tour operators have incorporated Knut visits into their travel itineraries, Berlin hotels are offering "Knut packages" that include a zoo ticket in the room price, and the city's tourist office anticipates a rise in daytrippers to the German capital to see Knut.

"We expect many additional day visitors to Berlin over Easter who will want to see Knut as part of their trip," said Natascha Kompatzki, spokeswoman for the Berlin Tourist Office.

Knut has his own daily show on the country's main ARD television channel, has featured in newspapers around the world and has even graced the front cover of Germany's edition of Vanity Fair.

Despite his pining for keeper Dörflein, Knut found time on Monday to receive Paul Okalik, prime minister of the Nunavut territory, the zoo said. The Nunavut territory is Canada's northernmost region and is home to 12,000 polar bears, around half the world's polar bear population.

To cope with the crowds, the zoo has put Knut in a larger enclosure, has split his daily two-hour public appearances into a morning and afternoon shift, and also reserved part of the viewing area for children and wheelchair users.

They have also told visitors to file past the enclosure rather than stand watching him -- parents had been complaining about adults hogging the best spots and depriving children of a proper view of Knut.