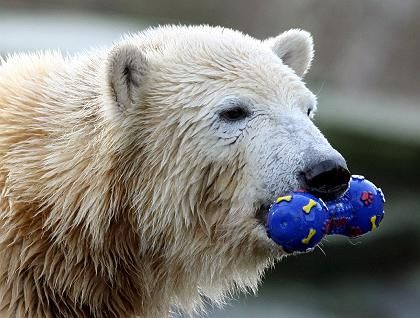 Won't anyone play with me?

Knut has had so much contact with humans in his young life that he doesn't realize he's a polar bear, one of his handlers has said. The celebrity bear has been finding it hard to cope ever since his keepers were forbidden to play with him.

Markus Röbke, who helped keeper Thomas Dörflein hand-rear Knut in Berlin Zoo, has said the bear should leave the zoo as soon as possible, to help him get used to a life without the people who brought him up.

"Knut must go. As soon as possible," Röbke told the Tuesday edition of the mass circulation newspaper Bild. He said the zoo's management in February issued a strict ban on playing with Knut. "We had to give a written assurance that we would no longer have direct contact with Knut. If we don't adhere to that, we face disciplinary action," said Röbke. The zoo could not immediately be reached for comment.

According to Röbke, Knut has something of an identity crisis. "He doesn't know that he's a polar bear," he said. "As long as he's with us, he will always regard Thomas Dörflein as his father."

Knut now howls plaintively whenever he picks up Dörflein's scent, and has become so used to the attention of people that he also cries when no one is standing in front of his enclosure watching him.

When the zoo had to close for a day this winter because all the paths were iced over, Knut howled for hours until a keeper took pity on him and stood in front of his enclosure.

"Knut needs an audience. That has to change," Röbke told Bild.

Last Friday, only a handful of visitors were there to watch the bear, who now weighs 140 kilos, lie listlessly on a mound of sand. It was a far cry from 12 months ago, when the snow-white ball of fur with button eyes was first presented to an adoring public. Then, thousands of visitors queued up to watch him frolic with Dörflein.