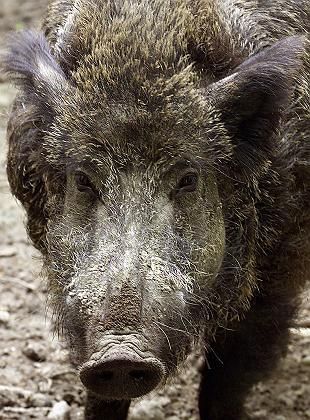 Two German policemen were so scared of a wild boar that they leapt onto the balcony of an apartment block to escape it and eventually opened fire with their service revolvers, failing however to kill it.

The drama began early on Monday evening when residents in the Schwanheim suburb of Frankfurt reported a very large wild boar roaming around a liquor store, Frankfurt police said in a statement. Several police cars rushed to the scene but the boar had disappeared by the time they arrived.

Shortly afterwards police spotted the boar trotting down a nearby street and they gave chase. "Initially the attempts of the officers to drive the animal towards the forest appeared to be succussful, but suddenly the boar appeared to change its mind, became increasingly aggressive and finally attacked the officers," police said.

"The two officers were only able to get to safety with a bold leap onto the balcony of an apartment block."

Police finally decided to open fire on the boar and wounded it, but it disappeared without trace into the darkness. Police said fresh attempts to locate the animal would be made during Tuesday, this time with the help of a professional hunter.