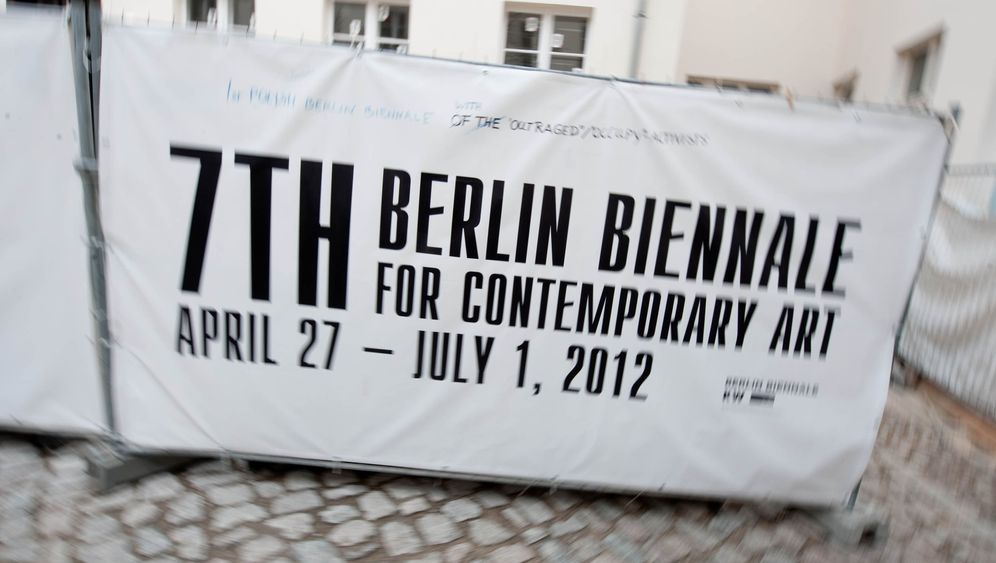 Auschwitz, ashes, earth and now this delicate green. Perhaps it's too pretty, and the chain of associations too simple, to really do justice to the horror.

On the other hand, 320 new Holocaust memorials have been planted in Berlin. Although it wasn't done in secret, it happened -- unlike Berlin's most prominent Holocaust memorial -- without any debate or votes in the German parliament, the Bundestag. The birch trees simply appeared -- in parks, schoolyards and even on the grounds of the building that houses the representation of Lower Saxony state in the capital. That in itself is a coup.

Artur Zmijewski likes it when art changes reality, and when it becomes reality. He isn't as fond of other types of art. The trees are a project of the 7th Berlin Biennale art exhibition. And Zmijewski, the enemy of art, is its curator.

The Biennale is one of the most important contemporary art events in Germany. It has helped Berlin be taken seriously as a center for contemporary art. The federal government's cultural foundation is supporting it to the tune of €2.5 million ($3.3 million).

Like almost no other biennial art festival, the Berlin exhibition depends on the city and its atmosphere, and on the various locations and neighborhoods where art is being exhibited. The Biennale centers around the Kunst-Werke (KW) exhibition space on Auguststrasse in the city's central Mitte district. The neighborhood was once a run-down part of East Berlin, imbued with a sense of melancholy that seemed very authentic, especially to foreign visitors. Despite the fact that Mitte has now been completely gentrified, it has retained some of its former atmosphere.

Artists that were unknown at the time and later became famous, like German painter Jonathan Meese and the Danish-Icelandic artist Olafur Eliasson, participated in the first Berlin Biennale in 1998. If they achieved anything, it was to draw attention to themselves. Every two years after that, at each new Biennale, artists would attempt to interpret society and the zeitgeist. Only the last Biennale, in 2010, which was curated by Vienna artist Kathrin Rhomberg, was forgotten soon after it opened. It didn't seem "Berlin" enough, and it tried too hard not to be noticed and to get everything right with conceptual art. The event was such a failure that the organizers didn't even reveal the attendance statistics afterwards.

But the upcoming 7th Biennale will likely be one of the most noted art shows of 2012, despite the fact that the famous Kassel exhibition Documenta, which only takes place every five years, is also happening this year. It officially starts on Thursday, but it's actually been underway for some time. Zmijewski has been the talk of the Berlin art scene since his appointment as the festival curator in 2010. He has exceeded expectations, and then some.

That's because Zmijewski began by producing some rather strange pieces of news. He publicly called upon artists to submit applications to take part in the exhibition, requesting that they indicate their political views as part of the application. A full-scale book-destroying event was announced, which reminded many of the book burnings of the Nazi era. And Zmijewski appointed what he called "associated curators" from Russia who were members of the infamous Voina artists' collective. International arrest warrants have been issued for two members of the group, who are accused of hooliganism and the use of violence. And then there is the logo of this year's show, which vaguely resembles a rune -- something that is controversial in Germany because of the Nazis' use of Germanic symbols. Zmijewski is clearly a man who is not afraid of the bold gesture.

Zmijewski, an even-keeled man who sports a beard and has a large ego, is also an artist. He has participated in the Venice Biennale and the Documenta. Newsweek considers the Warsaw native to be one of the 10 most important contemporary artists. In one of his films, happy, naked people hop around in the gas chamber and cellar of a former concentration camp. The work, titled "Berek", was recently banned from a Berlin exhibition after visitors had complained, prompting critics to accuse the organizers of censorship. Now Zmijewski plans to simply show the short film at the Biennale, as a symbol of a conflict over art.

The jury that selected him for the Biennale, and which includes several curators, knew why it picked him: because he would design this year's show the way he creates art. His Biennale would be political, but also politically incorrect, bold and scandalous. It would address art's existential crisis as a theme and, as a result, would pose a perfectly reasonable question: What exactly is art good for anymore, other than generating high prices at auctions?

On this spring day, Zmijewski is gazing silently out at the lawn of a gardening school in Berlin's Neukölln district. German and Polish youth are reaching for shovels, digging holes in the earth and planting a few Auschwitz birch trees.

The installation, titled "Berlin-Birkenau," is by the young Polish artist Lukasz Surowiec, who couldn't make it on this particular day, and so all eyes are on the man who discovered him instead. Zmijewski himself doesn't pick up a shovel or give a speech. After some whispering, his representative does the talking instead. But Zmijewski certainly looks satisfied.

A few hours earlier, he had being sitting in his small office, looking like a foreign body at his own desk. The Berlin Biennale, he said somewhat sullenly, is a machine, and his job is to feed it.

In the end, a big, defiant Zmijewski artwork will have been created -- art that ultimately doesn't want to be art, but real activism instead. Visitors will encounter members of Occupy Berlin in the art works. They are setting up a base camp in the midst of the exhibition, inviting allies from Amsterdam, New York and the Arab countries to join them. Instead of viewing a work of art, visitors will encounter a protest. Some could see it as a provocation, a farewell to art.

Zmijewski says that we can all learn something from the Occupy movement. We could ask ourselves what politics means to us, whether and how we become involved, and how we champion social values. But is it a provocation, a strategy or even agitprop? This isn't his language, he says. These are words that only journalists use, which no one in the art world would ever say. The question of whether something is even art "bores me," says Zmijewski. He also says that the art world imposes too narrow limits on itself.

This is why Zmijewski will tell a story on Auguststrasse that extends beyond the works on display. It is the story of both opening borders and a rescue, because he fears that art could fail because of its own triviality, and because of the neoliberal craving for making money out of art. Zmijewski wants to protect himself from that. His ego, as mentioned earlier, isn't small.

Unlike other artists, he isn't interested in reflection, or in the idea of reality as a theoretical construct. He cares about real life.

And this is what real life looks like for him. Residents of a Palestinian refugee camp in the West Bank have built a giant key. It is a symbol of the return to Israel, their homeland, which remains off-limits to them. An artist born in Sarajevo is building a peace wall in Kreuzberg, a Berlin neighborhood where a bitter fight has been underway for years to protect the district's less affluent from being forced out by gentrification.

A Belarusian artist is publishing a newspaper in which she reports on the dictatorship in her country. An Israeli artist is hosting a conference on the subject of reviving a Jewish community in Poland. And a Hungarian curator wants to expedite the completion of the planned Berlin memorial to the Sinti and Roma murdered by the Nazis, which has been beset by delays. She is a member of this minority herself.

Years ago, Zmijewski published a manifesto called "The Applied Social Arts." Now a book of interviews, titled "Forget Fear," has appeared to coincide with the Biennale. For Zmijewski, art, or rather the type of art he doesn't like, is a collection of mere ideas, a "vicious circle of creative omnipotence." Zmijewski wants to break the circle, and he wants powerful works. He also wants a public that is willing to be politicized. In return, for the first time in the history of the festival, entry to the Biennale will be free of charge.

Much of this sounds like yesterday's utopias, like the 1920s. Indeed, Zmijewski, though only 45, seems a little old-fashioned, and not as blasé as artists usually are. The impatience with which he reacts to questions and criticism is real.

Zmijewski grew up in the politically frozen climate of the Eastern Bloc, and he says that as a schoolboy he suffered greatly in the atmosphere of oppression. Later, he says, he had the feeling that he was finally being allowed to help shape reality, but he also realized that effective tools, political or artistic, are needed to do so.

His tools became the violation of taboos and deliberate tastelessness: deaf young people who sing a Bach cantata with great joy but completely off-key; a former concentration camp inmate who he convinced to have the faded number on his lower arm re-tattooed; and the group of naked people who he filmed playing tag in a gas chamber. "None of us are finished with history yet," he says. The Germans, he says, have developed a very touristic approach to commemorating the past, which he mistrusts.

Sometimes it seems as if he were picking a fight merely to get attention. At the beginning of the year, one of his artists, Czech native Martin Zet, announced that he planned to collect 60,000 copies of Thilo Sarrazin's best-selling anti-Muslim polemic "Germany Does Itself In", work them into an installation and then "recycle" them. The project was sharply criticized in newspapers and in the art world, because of its alleged similarities to Nazi book-burning. Some of the accusations were exaggerated. But why would someone even want to add fuel to a debate in which all the arguments have already been exhausted a long time ago?

But wait, says Zmijewski. Is a foreign artist not allowed to conduct a discussion about this book in his own way, just because the Germans have already done it in their way? Is it appropriate that copies of Sarrazin's book are still available and are still turning a profit for the publishing house?

Artist Zet had set up collection points in the art associations of major German cities. But only a handful of copies, and one copy of the Koran, were dropped off. At the Biennale, Zet has created a sculpture in a room -- the donated books are pressed against the wall with a metal rod -- and will show a documentary about the dispute.

Zmijewski says that his Biennale, like its predecessors, will also look like an art exhibition. People shouldn't have false expectations, he says. But that's precisely the trick. Many of the people he has invited are not artists at all, or they hardly see themselves as such anymore. Zmijewski is using them to occupy the art world.

He shows the art world that it is superfluous. He shows it with each work, such as the head of Christ by the Polish sculptor Miroslaw Patecki, a work that wants to be art and yet, in this environment, merely serves to illustrate the ridiculous and anachronistic nature of art. Zmijewski and his allies are behaving in more polemical and penetrating ways that the art scene is accustomed to. But this is exactly what the art scene, with its love of scandal, wanted.

One could also say that Zmijewski is declaring war on the art world, at its own request. The art world, which alternates between self-love and self-hate, will be only too glad to accept this.