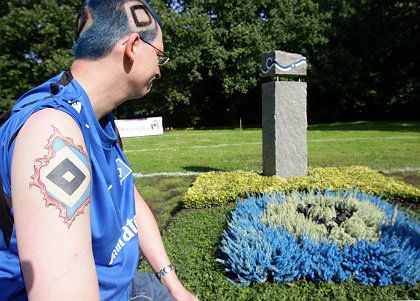 Looking forward to the final whistle?

Fans of German soccer club Hamburger SV are getting their own cemetery where they can rest in eternity within earshot of their stadium.

The club laid the foundation stone on Sunday for the graveyard which will be adorned with an entrance gate in the shape of a goal.

It is the first dedicated football cemetery in Germany and is located just a few meters away from the Nordbank Arena stadium where the club plays its home matches.

"We'll have room for 300 to 500 graves," Christian Reichert, a member of HSV's managing board, told local TV station Hamburg 1. He said he had already received 15 requests to reserve a plot. "The oldest is 85 years old, the youngest 27." The kick-off for burials is next year.

The graves will be arranged in a semi-circle on three ascending levels to resemble a football stand. The 2,500 square meter site is in the corner of an existing cemetery.

Reichert said the cemetery was being built in response to queries from some of the club's 50,000 members about whether it would be possible to have their ashes scattered over the pitch, to be buried in the stadium or have an urn buried under the penalty spot.

Fans of England's Everton Football club can have their ashes buried in an urn beside the pitch. German burial laws don't allow that, but fans of German football clubs Schalke 04 and Borussia Dortmund can be buried in football-shaped urns or coffins painted in their team colors.

Reichert said the only other dedicated football cemetery he knew about was in Argentina, where the club Boca Juniors is building one.

He said the choice of headstone -- perhaps in the shape of HSV's diamond emblem -- would be left open to fans but garish colors would not be encouraged. He said he could imagine flowers to be planted in the shape of the club's emblem, and memorial stones to be erected to famous HSV players.

HSV supporter Ernst Schmidt, an 81-year-old widower, said he may reserve a plot even though he has already made arrangements to be buried alongside his wife. "I'm going to enquire whether it's possible," Schmidt told reporters. "I've been an HSV fan for 57 years. My life, it's only football."