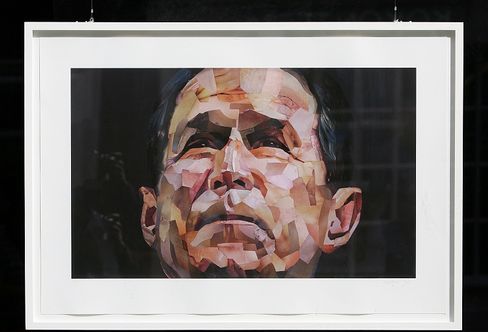 Warning to readers: Offensive elements in the image have not been pixilated.

British artist Jonathan Yeo had every reason to be offended. The Bush Library in Texas had yet again rescinded a commission it had given him to paint a portrait of United States President George W. Bush. In the end, though, the artist decided to go ahead with his artistic portrayal of the 43rd president, even if he wasn't getting paid for it -- and created a portrait of Bush using a collage of pornographic images.

The tribute has not gone over well with Bush's supporters. A spokesman for Republicans Abroad International described the portrait as a "cheap stunt" in an interview with the British tabloid The Sun. Meanwhile, a spokesman for the Republican Party in Bush's home state of Texas didn't find much humor in the portrait either. "This picture is very distasteful," he told the paper, adding angrily, "Why would anyone want to make a picture of our president from pornographic material?"

For his part, artist Yeo has reacted calmly to the furore over the smutty visage. "I did it for fun, not to offend," he told the paper, adding that he was "pleased with it."

Nor has Yeo always been so cruel to politicians. He recently completed a portrait of former British Prime Minister Tony Blair -- without the help of nudity, sexual acts or graphic displays of genitalia.

The artwork, titled "Bush 2007," is currently being shown as part of an exhibition at London's Lazarides Gallery and is available in a limited edition run of 150 prints, each measuring 86 by 56 centimeters.