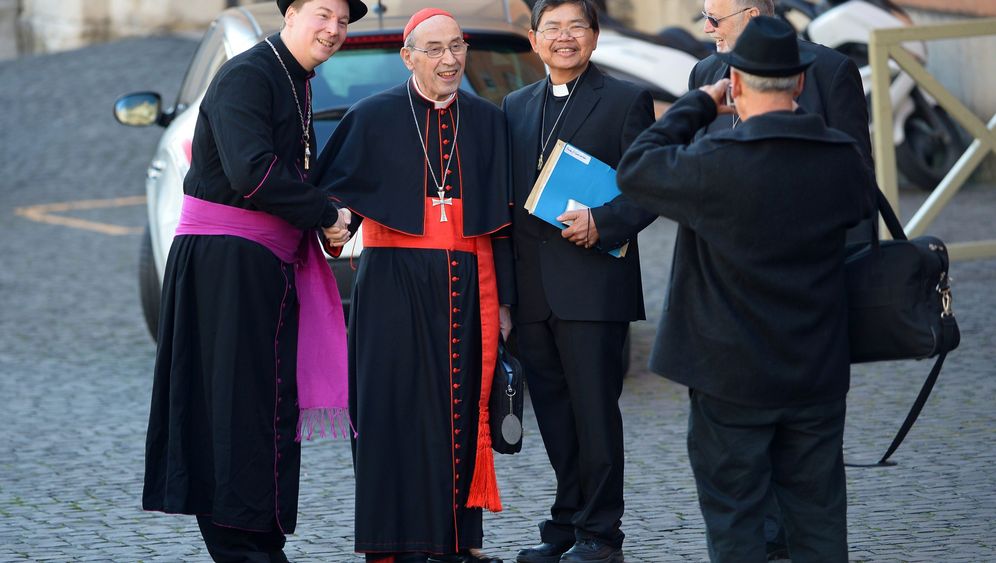 "Bishop" Ralph Napierski is in demand. His website features photos of the Berliner posing enthusiastically with a number of German politicians at various events -- some looking a little startled, admittedly -- along with a host of clerics from various nations. Some images show him wearing a black T-shirt emblazoned in pink with the statement "Jesus Loves You."

Napierski gets around. He even gatecrashed a pre-conclave meeting of cardinals in the Vatican on Monday, posing and chatting happily with the most senior prelates of the Catholic Church who are preparing to elect a new pope -- until he was indentified as an impostor and marched out by members of the Swiss Guard.

The problem is that Ralph Napierski isn't really a bishop, at least according to someone who should know: Matthias Kopp, spokesman for the German Bishops' Conference. "We know about Mr. Napierski," Kopp told mass circulation Bild newspaper this week. "He claims to be a Catholic bishop. We contradict that. He's not listed in the Pontifical Yearbook, in which all legitimate Catholic bishops are registered."

In Rome, Napierski looked almost convincing in his smart black trilby, violet sash, and crucifix on a chain. Maybe the sneakers gave him away. He strode up to various eminences, shaking hands and smiling into cameras, telling people his name was "Basilius" and he was a member of the "Italian Orthodox Church" -- which doesn't actually exist.

Napierski's stunt made headlines around the world. But the Catholic Church back home in Germany is anything but amused. The man "is making himself a global laughingstock," thundered the spokesman of the archdiocese of Berlin. And Kopp of the Bishops' Conference said Napierski's behaviour was "unacceptable."

The would-be bishop is no stranger to public appearances. He runs a number of websites in which he reports on his activities as "Leader of the Catholic Order Corpus Dei." He claims to have set up a TV station and an order of Knights Templar. He has also graced esoteric trade fairs, Christopher Street Day parades and the Love Parade with his presence.

The Catholic Church and Sex Toys

He's even tried his hand at being an Internet consumer watchdog. In 2003, he highlighted a security loophole on the online auction site eBay by conducting a fake auction that drove the price of a small digital photo to €10 million. He was acting, Napierski claimed at the time, "in the interests of the security of the world population."

It's hard to say what Napierski really is: a joker, a church critic or simply an eccentric with strong leanings toward esotericism. He rarely talks to the press and couldn't be reached for an interview with SPIEGEL ONLINE. In September 2011, he spoke to Cologne-based tabloid Express about sadomoasochism in the Catholic Church and explained why he visits erotic trade fairs: "The church mustn't make sex a taboo. That's just what leads to secrecy and the consumption of pornography right up to Internet pornography addiction." It was important, he added, that the church contribute to a healthy attitude to sex and also to the use of sex toys.

It could have been an interesting topic for the cardinals as they congregated in the Vatican this week to begin the process of selecting a new pope to lead the world's 1.2 billion Catholics -- if only the Swiss Guards hadn't intervened.

Vatican spokesman Federico Lombardi preferred not to comment on the incident, saying he had no information on it. But then he added, just to be sure: "The cardinals are all real."