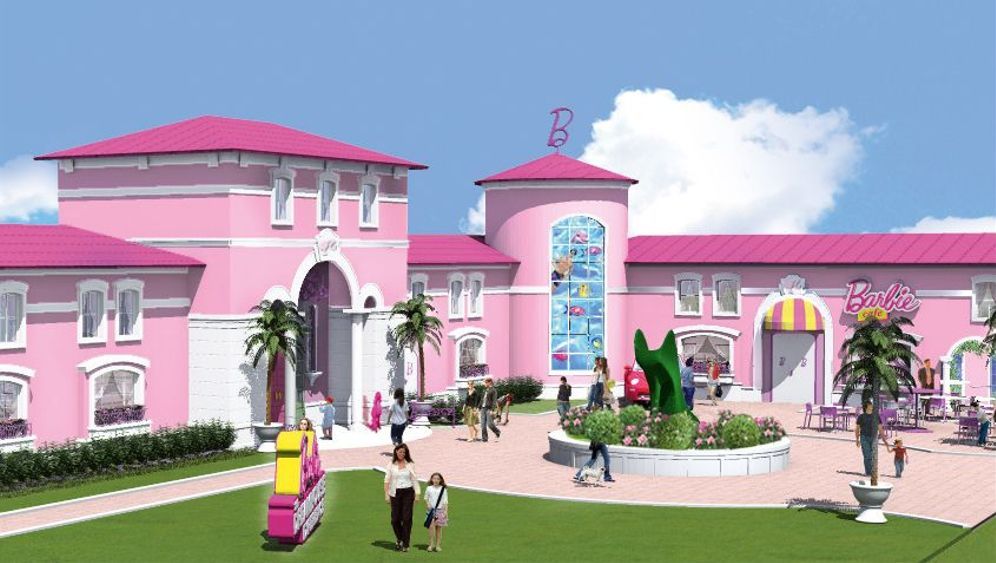 Soon, Barbie will have a new home. A giant pink dollhouse is being erected near the elevated train tracks that cut through Berlin's famous Alexanderplatz square. When it opens to the public, the 2,500-square-meter (26,000-square-foot) plush world will be the first of its kind, a hands-on version of little girls' dreams, with a four-poster Barbie bed, a walk-in Barbie closet and a Barbie cupcake kitchen.

An enormous image of the doll already looms over passing trains from a billboard at the construction site. "Visit me!" it beckons. Scheduled to open on May 16, the "Barbie Dreamhouse Experience" will be finished just in time for the tourist high season, with up to 3,000 visitors expected each day.

But how welcome is the tourist attraction in a city famous for its alternative culture? In the gritty Neukölln district, young members of the far-left Left Party plan to protest the opening. At the beginning of March, they started an "Occupy Barbie Dreamhouse" page on Facebook. They are campaigning against what they describe as the pinkification of young girls, high heels, plush and consumerism -- basically everything Barbie stands for.

At issue, as is so often the case in the rapidly growing German capital, is the tension between culture and commerce. It's a perpetual battle in Berlin. Last year, leftist protesters in the alternative Kreuzberg district fought against a temporary "future lab" to be created by BMW and the Guggenheim Museum. The conflict also emerged again in recent days during demonstrations against the removal of a Berlin Wall section to make way for a luxury housing project.

'A Role Model That's Not OK'

Michael Koschitzki, 27, is a member of the Left Party's youth organization. He studied math and history and works as an online editor for the Socialist Alternative (SAV). It's just prior to Easter, and he's standing on Alexanderplatz explaining why Barbie gets under his skin. "They present an image of cooking, primping and singing, as if it were in some way life-fulfilling," he says. "The Barbie Dreamhouse is the expression of a conventional role model that isn't OK." It's one that includes only two career options for women, he says: model or a pop star.

A few days ago, Koschitzki and his comrades met in an office space in Neukölln to discuss their campaign against Barbie. They quickly agreed that the blonde doll stands not only for an unhealthy beauty standard and the excesses of the cosmetics industry, but against emancipation and equal rights.

The young leftists were quick to attract supporters on Facebook. And it's not just the Dreamhouse they are protesting. They also have their sights set on private broadcaster ProSieben, which is currently seeking "Germany's best Barbie" among young blonde contestants. Another link on the group's Facebook page is to the "Pinkstinks," an organization that fights the use of the color pink in role models for young girls and also wants to join the protest in Berlin against sexism in advertising.

Christopher Rahofer is the man responsible for the creation of Berlin's Barbie world. The 47-year-old head of the Vienna-based marketing firm EMS has two daughters who both like to play with Barbie dolls. So far, he says, he hasn't noticed that this has damaged them in any way.

'This Is Just About Having Fun'

Nor is he able to understand the fuss in Berlin. "This is just about having fun," he says. And anyone with nothing better to do than protest Barbie shouldn't make life difficult for the children who want to see her, he adds. "I think the protest is totally unnecessary," he says.

Rahofer is something of an expert on the doll. In 2003, he organized an exhibition about Barbie in Vienna. The show also tackled the issue of role models and the blonde doll's supposed beauty ideal. Although the issue of anorexia is part of the Barbie debate elsewhere, it won't be on the agenda in the Barbie Dreamhouse.

"The Barbie Dreamhouse has been conceived as a themed environment, a toyworld dreamhouse that we bring to life," says Rahofer. It should be an "interactive experience," he says, not an "educational exhibition." The Austrian spent a year and a half refining his plans for the attraction after obtaining a license from American toymaker Mattel. He adds that he isn't trying to "transport some kind of deep message."

At the Alexanderplatz Dreamhouse, putting on makeup, styling and shopping will be the main focus, and visitors are meant to feel as if they have suddenly been transported into a doll's world. Young girls can practice being Barbie on a pink runway or karaoke stage -- after they've paid the €22 ($28) entry fee, of course.

It's possible that Barbie will leave Berlin after a few months, though. The Dreamhouse is a portable structure, and plans are already in the works for it to tour Europe beginning in August. Paris, Madrid and Lisbon have already expressed interest, Rahofer says.