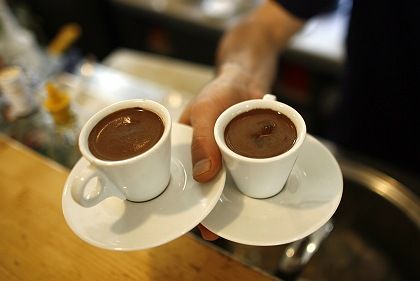 Coffee could soon be just a robot away.

The wonders of modern robotics have allowed mankind to attain new technical heights by increasing productivity and making the previously impossible possible. This Wednesday, Italians scientists unveiled a robot in Rome that they hope will continue mankind's tireless march into the future. This robot, named "Justine," makes coffee.

"She flexible and precise enough to make a cup of coffee," Professor Bruno Siciliano told ANSA, the Italian news agency, "although she only stretches to the instant variety at the moment."

Siciliano is a professor at Naples University and part of the EU project DEXMART. The €6.3-million ($9.3 million) project aims to develop robots that can use two arms simultaneously and in harmony, as opposed to current robots, which only have the technological complexity to handle "one-armed" tasks.

Siciliano also predicted that robots would help humans do more around the home in the next 15 years. Justine, for her part, "can also pick things up off the floor," Siciliano told ANSA.

They might just want to call the next robot generation "Mom."