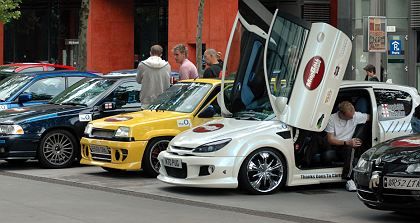 Organizers of the modified-car excursion across Europe insisted that ModBall 2007 was "neither a rally nor a race." The German police on Monday afternoon, however, begged to differ. And the inaugural event, with its 77 cars and 143 participants -- most of them from Britain -- was shut down on just the second of a planned seven legs across Europe.

The German autobahn police began getting reports on Monday afternoon of cars racing south near Düsseldorf. Drivers reported several cars -- each with similar stickers and numbers -- bombing down the highway with little regard for life and limb, some recklessly passing on the right. One driver even reported seeing a ModBall participant hanging out of a car window filming his fellow racers.

According to the ModBall Web site, the European tour was to continue from Cologne to Prague, Vienna, Milan, Lyon and back to London on June 16. One participant was quoted as saying the drive was actually to raise money for charity. But the Web site makes clear that each stop was to be highlighted by extensive partying.

Now, though, they are heading home prematurely. The German authorities fined each participant €175 -- down payments on further monetary penalties to come -- and escorted them across the Belgian border. Belgian and French police then accompanied them to Calais where they were to be ferried home. One 22-year-old driver was nailed for passing on the right-hand shoulder -- he was fined €1,500 and lost his driver's license.

At the beginning of May, a similar race -- called the Gumball Rally -- was halted after a participant crashed into a Volkwagen Golf in Macedonia. The two passengers in the Golf were killed in that accident.

Meanwhile in Berlin on Tuesday, a 19-year-old was critically injured in a crash after the engine fell out of the car he was driving while racing his brother on city streets. The boys' father then attacked police when he showed up at the scene of the accident -- likely meaning that the family will be saddled with three hefty fines in addition to the wrecked car and injured son.