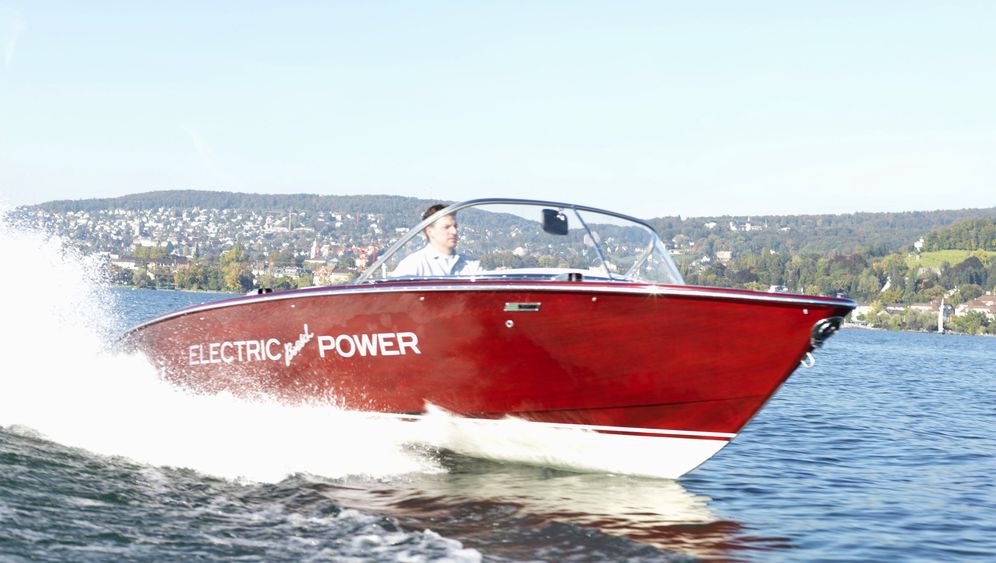 Electric boats, as any visitor to Königsee lake in Bavaria knows, are both old-fashioned and silent: Tour boats with electric motors have glided like swans across the icy lake since the turn of the century. Navies have also experimented with battery-powered submarines since before World War I. But the technology has taken a long time to become a significant factor in the commercial boating sector. Now, says Markus Boesch, junior manager at the Boesch shipyard in Zürich, "seeing an electric boat out on a lake isn't as rare as it once was."

In particular, he means Boesch speed boats on Zürich Lake. The Swiss may not be the only or even the biggest manufacturers of water-compatible electric vehicles, but most other battery-powered boats are nothing more than "lame barges," Boesch says. His firm's wooden boats, on the other hand, are modeled after classic Riva speedboats from Italy.

"We offer the first non-custom boat ever to reach a plane with an electric motor," Boesch says. The 80 kilowatt-strong (108 horsepower) electric motor reaches a top speed of nearly 55 kilometers per hour (34 miles per hour), and a variant with 120 kilowatts (162 horsepower) under the hood can even hit 60 kph. "No one else makes faster electric boats that aren't custom."

Many skippers often refer to Boesch's boats as "Teslas for the water," alluding to the electric-powered roadster made by California-based Tesla Motors. The car is widely regarded as the spark that catalyzed the e-car revolution.

"We started building electric boats by the late '90s at the request of individual clients," Boesch says. Back then, prototypes were being tested that would make boat builders today shake their heads. "We just stuck 20 car batteries under the hull. They were terribly heavy, you had to wait an unbearably long time to recharge them and they had hardly any battery life."

No wonder the market for electric boats didn't take off. The Swiss, however, refused to capitulate. With the help of numerous specialists, Boesch achieved a breakthrough, and since 2005 rechargeable lithium-polymer batteries from a military outfitter have served as the boats' power packs.

"They weigh a quarter as much as conventional lead batteries," says Boesch. "They're especially durable and not nearly as sensitive to changes in temperature. With them we've been able to double the maximum speed and range."

Depending on the batteries' dimensions, they can deliver as much energy as 15 to 20 liters of gas (four to five gallons), which is sufficient for a entire day out on the water. "Taking the boat across the lake to get some ice cream, then out for a bit of waterskiing before heading back to the marina at night is no problem," Boesch says. But afterward, the machines must be allowed to recharge for at least six hours at a strong power source, or 10 hours at a normal household outlet.

Nevertheless, electric watercraft make up a third of Boesch's profits. Many of them are sold abroad. Some countries have banished combustion engines from their lakes altogether, and Germany and Austria have long offered the necessary infrastructure for charging electric motors. Switzerland is just catching up.

Which may explain why the shipyard's most ambitious project -- an energy grid for electric boats -- isn't coming along. Stashed in a drawer at the Boesch yard lie approved building plans for a large solar installation on the boat-factory grounds. "It would produce enough energy so that 15 electric boats could be charged with solar power," the junior manager says. "Then they wouldn't only be quick, quiet and emission-free, but really clean too."