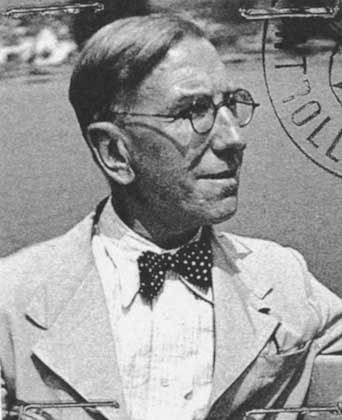 Alexander Moritz Frey served together with Adolf Hitler in World War I.

The words were written by Alexander Moritz Frey, a young medical assistant in the German trenches during World War I:

"One evening a pale, tall man tumbled down into the cellar after the first shells of the daily evening attack had begun to fall, fear and rage glowing in his eyes. At that time he looked tall, because he was so thin. A full moustache  covered the ugly slit of his mouth."

"He sat there panting .... His yellow face grew red ... and he resembled a gobbling turkey as he began to rant about the English. ... I immediately had the same impression that many had of him later -- that he took the military maneuvers of the enemy personally, as if they wanted to take his precious life in particular."

Years later, they would. The man Frey had met was Private Adolf Hitler.

But Frey's writings on Hitler -- in the form of essays and fiction -- were eventually forgotten. Historians have spent the decades since the Nazi dictator took his life in his Berlin bunker at the very end of World War II trying to decipher the Hitler enigma -- but nobody really knew what Hitler the soldier was like.

Until now. German journalist Stefan Ernsting recently rediscovered the work that Frey, who served alongside Hitler in the 16th Bavarian Reserve Regiment, left behind. Ernsting's new biography of Hitler's fellow soldier, "The Fantastic Rebel Alexander Moritz Frey," republishes Frey's eyewitness accounts of the man who would change 20th century history. It is the first reliable, first-person account by someone who served alongside Hitler.

"Two or three of his former comrades tried to cash in on having known Hitler during the war, but their testimonies were not useful for historical research because you couldn't separate facts from fiction and most of it was just nostalgia anyway," Ernsting told SPIEGEL ONLINE.

Ernsting stumbled on the trail of Frey's eye-witness accounts of Hitler while reading an anthology of essays about early German science fiction and fantasy writing. "One essay about Frey mentioned in passing that he had fought alongside Hitler in World War I," Ernsting recalls. "I thought, wait a minute. I have to check this out."

Ernsting began scouring libraries and archives for information about the obscure writer. He struck gold when he found an obscure essay by Frey entitled "The Unknown Private -- Personal Memories of Hitler" ("Der unbekannte Gefreite -- persönliche Erinnerungen an Hitler") in an archive in the German town of Marbach. 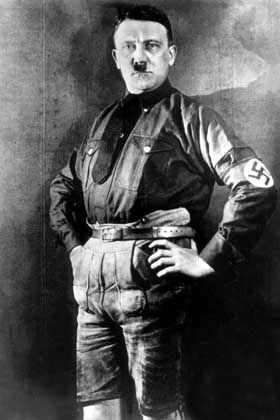 "He was alone in the manner of a predator before it leaps, imagining its prey. He didn't see his surroundings."

Frey's essay is reprinted in full in the new biography. And it makes clear that Frey, whose left-wing politics forced him to go into exile in 1933, had little love for the young Austrian who would later become the Führer. "He spoke, ranted, boasted and distorted the true state of affairs with a certain cunning talent already back then as a lowly private, just as he would do 25 years later," Frey writes.

But his account gives new insight into Hitler's character during those formative years. "When people claim that he had been a coward, that's not true," Frey writes. "But he also wasn't brave; he lacked the composure for that. He was always alert, ready to act, back-stabbing, very concerned about himself."

Frey, a pacifist, served as a medical assistant in the regiment. He once had to treat Hitler, and "gave him some sort of tablet to swallow." However Hitler ignored Frey's recommendation that he see a doctor -- so that he would gain the reputation among his comrades of someone who soldiered on despite being ill. "He made sure that ... it came to the ears of the officers that Hitler has a 'terrific throat infection' but is doing his duty nonetheless," Frey writes.

Frey believed that the reason Hitler was never promoted -- a question which has vexed historians for many years -- was the same reason why he himself was happy to remain a medical assistant. Those serving in the trenches were more likely to get promotions. But as dangerous as many duties behind the lines were, there were fewer privations. "Compared to the terrible hardship of serving in the trenches, our posting was a small relief, complete with small comforts," Frey writes.

Frey, who was born in 1881 in Munich, originally studied law in Heidelberg and Freiburg but decided early on that he wanted to be a writer. He returned to Munich and dedicated himself to writing short stories and novels, specializing in the emerging genre of fantastic literature, which would later become science fiction.

After the war, Frey returned to Munich and his career went from strength to strength. His novels were well-received and for several years he wrote regularly for the famous satirical magazine "Simplicissmus."

But one unpleasant figure from his past kept cropping up. "After the end of the war in Munich, where we both lived, I often saw Hitler, although I never spoke to him again," Frey writes in "The Unknown Private."

He also ran into Hitler in the popular Café Heck, where Hitler tried to get his henchman Max Amann -- who had been in the same regiment as Frey and Hitler and later became an influential early Nazi Party member -- to convert the young writer to the Nazi cause. "'Hitler will make it, believe me, Frey, he will make it,'" Frey recalled Amann as saying. "'And you will regret it if you don't listen to me,' he told me. ... I made it unmistakably clear to him that I did not share the Nazi worldview."

Frey even ran into Hitler on the street the evening before the infamous 1923 Bierhall Putsch, which came to a violent end on Munich's Odeonsplatz. "He was alone, prowling along in the manner of a predator before it leaps, imagining its prey. He didn't see his surroundings," he later recalled.

Years later, Frey saw Hitler one last time, on March 15, 1938 when Hitler proclaimed the Anschluss of Austria on Vienna's Heldenplatz. Frey had fled Munich in 1933 after his apartment was raided and a warrant was issued for his arrest. He first went to Innsbruck before heading to Salzburg, where he slipped further and further into poverty, unable to get published.

And after the Nazis arrived, Frey didn't stay long in Austria either, escaping to Switzerland three days after the Anschluss. He would spend the rest of his life in Switzerland, perpetually struggling with the authorities to be allowed to stay.

After the war, Frey continued to fight against the Nazis, leading a personal crusade against 88 German authors who had signed a statement pledging their allegiance to Hitler in 1933. Nevertheless, Frey and his works were slowly forgotten. He died in January 1957.

Now though, thanks to Ernsting, Frey is back in the spotlight. Ernsting believes the newly-discovered accounts of Hitler are significant in that they help to "debunk the image of the Führer who did not shave and did not take a shower and was untouchable, and all this mythology Hitler created for himself."

"We're still treating Hitler like he's some holy man or something," he comments. "Let's stop doing that. He was just a pathetic little psychopath and they all fell for it."