It is 10 in the morning on the Boulevard Lascrosses, near the historic city center of the French city of Toulouse. Behind the metro station, people are casually strolling in the direction of the pedestrian zone, but on the four-lane street, the morning traffic is bumper to bumper. The drivers who are mostly to blame for the traffic jam are those who are driving along at a snail's pace searching for parking spots. But parking is rare, and even the sidewalk is blocked in some places. Aggravated drivers honk their horns, and exhaust fumes fill the air.

"The daily anarchy," growls Alexandre Marciel, pushing his fists into his pockets. "The existing parking spaces are already occupied by long-term parkers who hog the places, and the drivers coming from outside are hunting for spots."

That should soon change, however. Marciel, who is the 37-year-old deputy mayor of Toulouse, has been responsible for traffic and sanitation for the past two years. Now he wants to start guiding drivers to available parking spaces with an ingenious new system.

From Outer Space to the Street

A field test conducted outside the building located at 82 Boulevard Lascrosses demonstrates how the system will function. Here, sensors have been placed just below the surface of the road under half a dozen parking spaces. The high-tech probes, which are mounted 25 centimeters (9 inches) apart on a coaxial cable a hand's width under the bitumen, recognize changes in the surrounding magnetic field. That allows them to detect whether a parking spot is occupied or vacant. They can also recognize whether the vehicle in the space is a car or a truck, from their distinctive magnetic profiles, and can even detect when a garbage bin is occupying the parking spot.

"This technology comes from space travel," explains Patrick Givanovitch, head of the Toulouse start-up Lyberta, which, together with the French space agency CNES, has developed the sensors and got them ready for series production. "They were supposed to help find landing spots on Venus," Givanovitch explains. The hardware and software has been remodeled to make it suitable for the more earthly voyages undertaken by French drivers and has also been patented. "We know in real time where there is parking available in the city," he says.

The information gathered is sent to a server, which can keep track of around 2,500 to 3,000 sensors. The results, which are updated every few seconds, are then sent to users of the system. The only prerequisite is that they have a modern smartphone that can display the parking spots as pictograms on an electronic map. Green means a free spot, while occupied spaces are shown in red.

In the future, the information will also be accessible via GPS navigation systems, which will display vacant parking spots in the same way that they currently indicate gas stations, hospitals or churches. "In practice, this will mean that the driver will be able to input their destination and will see immediately whether there are parking spaces available there. If the spots are filled by other road users, the driver will be directed to other, empty parking spaces within a radius of approximately 300 meters (980 feet)," Givanovitch explains.

And it's not only the long-suffering drivers who will benefit from the real-time data -- the city of Toulouse will also gain from the intelligent allocation of parking spaces. In the future, the city administrators will have a complete overview of the city's 15,000 parking places. They will be able to see which spots are occupied and will even be able to extrapolate information about daily traffic flows in the city.

"We mainly want to utilize the existing parking places better and to make sure that there is a certain amount of rotation," says Marciel, the deputy mayor. "The system shows us whether a private vehicle is stopped on a space reserved for banks, waste collection vehicles or delivery vans. And we can see whether the spot is being occupied by what we call a 'suction-cup parker' -- in other words, a car that occupies the space not just for a few hours but stays there for days."

Take the example of the Boulevard Lascrosses. According to Givanovitch's phone, four of the vehicles have already been parked here for more than 24 hours. That is typical for illegal long-term parkers: Some 97 percent of the parking spots are filled for more than six hours a day by just one vehicle, and only one-third of those pays a parking fee. Even honest drivers tend to only pay 60 percent of the required parking fees, at best. "They act on the principle of hope," Marciel says. "They think: I'll just throw a euro in and hope that I don't get caught out."

Generally these offenders get away with it, because the police are not always out checking who has fed the parking meter. But with the new sensors it is immediately clear if someone has not paid, meaning the wrongdoer can be appropriately sanctioned. For the city, however, collecting missing parking fees is clearly not the priority. "We want to reclaim the public space that is currently occupied by cars," says the deputy mayor.

Using devices installed in their vehicles, users will also be able to indentify themselves as having priority when it comes to parking spaces. The technology is similar to that which enables regular users of the French highways to bypass toll booths by making wireless payments. In the cities, the devices could identify doctors, midwives or handicapped drivers and give them priority access to parking spaces. Politicians would also have the option of giving certain groups priority parking, depending on the location and time of day.

Meanwhile the costs of this innovative project are manageable. Marciel is expecting it to cost around €100 ($140) per parking space. In Toulouse, the project should have paid for itself within a few years. By December, the field test will have been expanded to include whole streets, and next year, a whole city quarter will have the sensors installed.

Similar parking guidance systems are also being developed in Paris and in the US. There have already been expressions of interest in the French system from Los Angeles, Toronto and Casablanca -- and not just because these places need more parking spaces, but also because of the environmental benefits.

Although only 10 percent of drivers in France's cities are on the lookout for parking places at any one time, studies have shown that they are responsible for 60 percent of the atmospheric pollution, because their search for a parking spot impedes other road users. The time spent waiting in traffic is estimated to add up to around 700 million wasted hours per year. During that time, fuel worth around €690 million is used by cars that are creeping along or standing still.

This is why Patrick Givanovitch, the head of Lyberta, is already dreaming of another range of sensors, which could be installed next to the magnets and which would be able to measure temperature, decibels or CO2 emissions. "At any time of the year, we would then know the situation on our streets in detail -- including air quality, noise levels and the risk of black ice," he says. 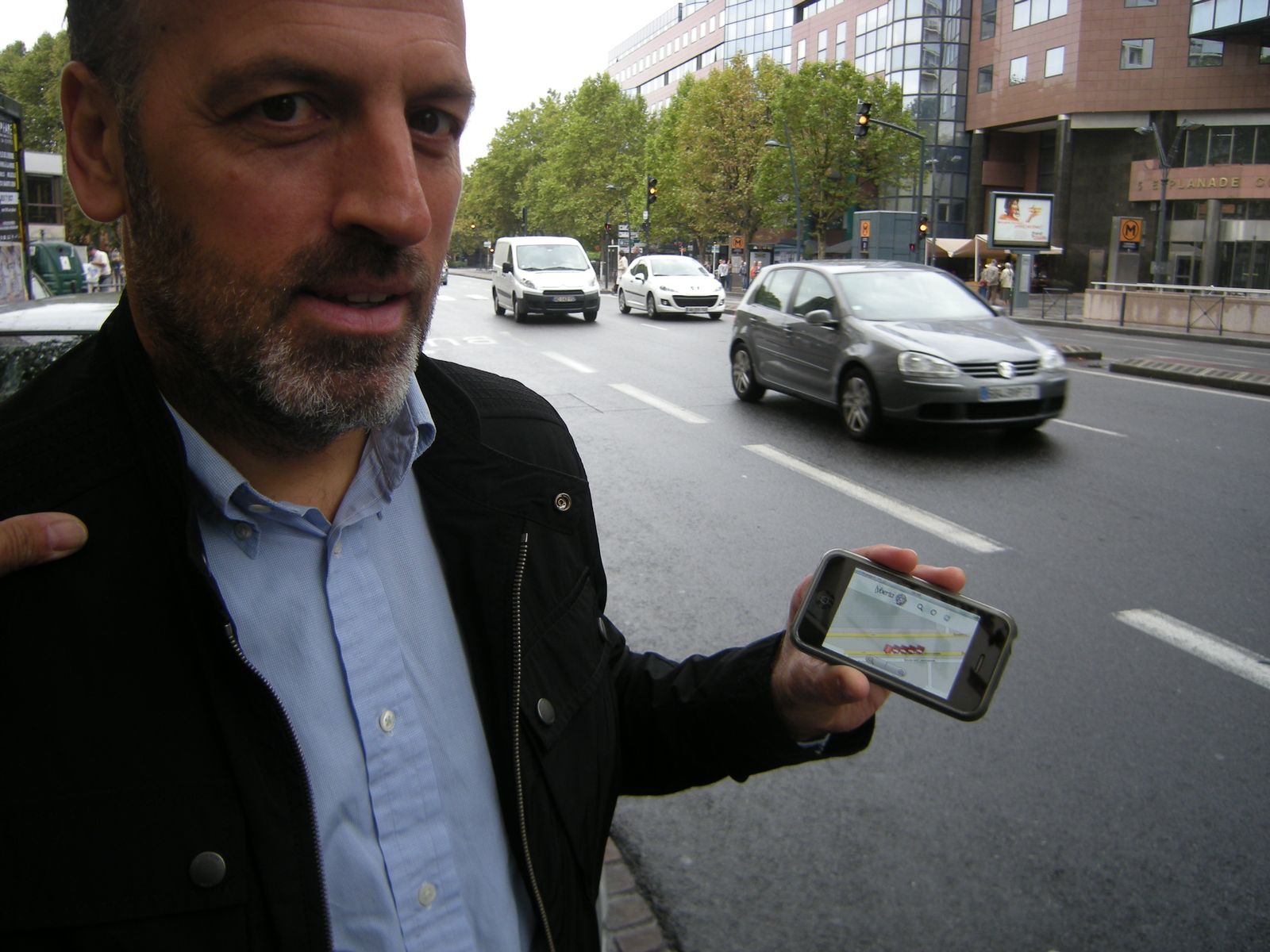