The Glauberg is a hot spot for archaeologists. For decades, researchers have been studying the hill in the central German state of Hesse, where people settled some 7,000 years ago.

Over the millennia, the plateau was inhabited by Celts and Alemanni and, in the Middle Ages, people there built castles that reached for the sky. Accordingly, researchers have found plenty of artifacts. In 1996, they made the sensational discovery of an almost perfectly preserved statue of a Celtic warrior, which is now known as the Celtic Prince of Glauberg.

It was thought unlikely that the mound would yield any more big surprises. At least that was the assumption until people with flying lasers showed up. They flew an airplane over the Glauberg multiple times, sending pulses of light to the ground and measuring their echoes. This "light detection and ranging" technology, known as LIDAR, helps scientists record differences in altitude down to just a few centimeters. Trees and bushes are no obstacle to accurate measurements -- they can simply be calculated out later with a computer. What remains is a three-dimensional image of the naked earth's surface, including geometric formations that betray any structures that might be hidden underground.

The researchers were fairly stunned by what the remote-sensing technology turned up on the Glauberg. At first glance, they recognized around a dozen potential burial mounds that they hadn't known about before. "We went and took a closer look at five of them," says Axel Posluschny. "They were all burial mounds."

Posluschny manages a project called Archaeolandscapes Europe (ArcLand), which operates under the Roman-Germanic Commission of the German Archaeological Institute. Some 57 European universities and research centers are participating in the €5 million undertaking, which began in 2010 and ends in 2015. The aim is to increase the archaeological use of modern remote-sensing technology such as LIDAR, ground-penetrating radar and other electric and magnetic techniques.

The broad potential of remote-sensing technology has been highlighted in an often spectacular manner in recent years. The Glauberg isn't the first site where new discoveries have come to light through aerial surveying even long after they have been examined countless times and become tourist destinations. 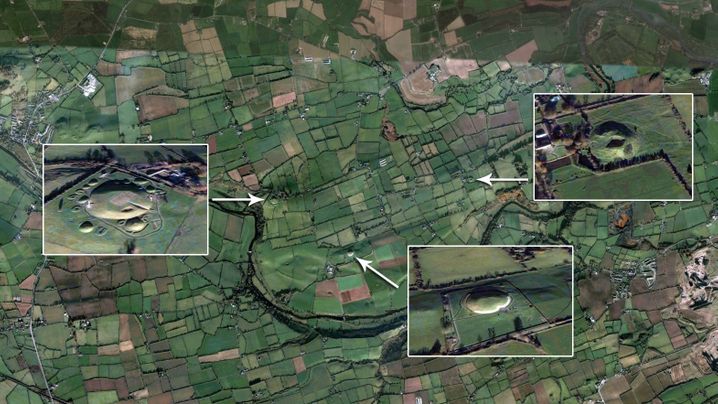 Lidar technology has also allowed archaeologists to make surprising discoveries in more obscure locations. For example, in a forest near Göppingen, in the southwestern German state of Baden-Württemberg, they have found an entire system of fortifications that by no means buried or invisible at ground level. "The wall was 3- to 4-meters-high at some points," says Jörg Bofinger, an official from the state's Stuttgart-based office of historical preservation. "No one had this construction on their radar. It was completely unknown." What's more, that was the case even though the state has been systematically taking aerial images since the beginning of the 1980s. "It's unbelievable that something like this would slip past us," Bofinger says.

Still, the archaeologists hope that using the high-tech aerial images will provide more than spectacular individual finds. "One doesn't just look at a single discovery site anymore but tries to understand the entire cultural landscape instead," Posluschny says. "That is an approach that is gaining a bigger foothold in archaeology." The reason for this, he continues, is that one can only understand "how people thought, lived and worked" if one views a find in the context of its wider environment.

The new remote-sensing technologies have revolutionized excavation practices for a second time. Roughly 60 years ago, archaeologists who had traditionally only used shovels, picks and brushes in their search for relics from the past started using another tool: aerial images. Doing so allowed them to swiftly discover that many structures that were practically invisible from below could only be made out from a bird's-eye view.

This is particularly true when it comes to large-scale constructions, such as the earthworks from Cornesti. These fortifications in western Romania presumably date back to the Bronze Age, or roughly 3,500 years ago, and are of a truly massive scale. The inner core of the four concentric fortifications alone has an area of almost 6 square kilometres (2.3 square miles). When viewed from above, waves in the landscape that seem inconspicuous from the ground turned out to be a system of ditches and ramparts.

Even better insights can be gained from something called photogrammetry. This technique entails taking images of an area from several perspectives using conventional cameras, and then combining these images to generate a 3-D model of it. However, the problem with normal aerial images is that landscapes aren't always merely covered with meadows or fields of wheat. Instead, dense forests often conceal everything lying beneath them.

The LIDAR equipment can overcome this hurdle. In addition to providing significantly more precise 3-D images, it also allows for overgrowth to be taken out of the equation. What's more, one can capture images of massive expanses in one fell swoop. For example, LIDAR scans of almost the entire state of Baden-Württemberg have been taken. The 160 terabytes of data in these scans is at first automatically examined by a computer for conspicuous structures. Given the sheer scale of the information, this takes some time, however. The computers have already been running calculations for five years, and Bofinger estimates that it will take another three years before maps of all potential archaeological sites will be available.

But just how valuable these searches have been can be seen just from a single example in the southern Black Forest. In this roughly 2,000-square-kilometer area, some 3,000 archaeological sites were already known. But, says Bofinger, "after the LIDAR scan, we had more than 36,000 sites." Suddenly, researchers found themselves looking at a cultural landscape that had sunk into obscurity. What merely looked like dense forests in earlier aerial images could now be recognized as charcoal kilns, furrows, mining structures, earthworks and burial mounds.

The lasers can even make out structures lying below the surface of water. Although they can only penetrate up to four meters deep, that is enough in many cases because most finds submerged in shallow water lie near shorelines.

What's more, there are a range of technologies that allow underground structures to be recognized without having to move mountains of earth. Ground-penetrating radar, also known as georadar, for example, can investigate ditches or other depressions up to a depth of two meters. Likewise, electromagnetic induction is well-suited to searching for buried structures.

In the coming years, looking at sites from above could also become the standard method for investigating the past because the costs continue to go down. Just a few years ago, researchers still had to board planes to take such images, but now unmanned drones are being used to perform jobs that can be handled from low altitudes. The combination of LIDAR technology and computer-supported image analysis is providing fantastic opportunities, according toPosluschny.

"A revolution is currently taking place in remote-sensing archaeology," he says.