It's strange when the first thing you notice about a magazine that specializes in the digital world is the nice paper. But that's the case with the first issue of the German edition of Wired, the celebrated US technology magazine, which hit the newsstands on Thursday -- it's printed on matte paper that is pleasing to the touch.

When you open it, the magazine immediately reminds you strongly of the American original and its British offshoot. The layout is playful, even chaotic at times. Small graphic elements are placed in the corners and there are typographical gimmicks inspired by M.C. Escher. The magazine is brimming over with photos and illustrations, some of which are quite enchanting, and the design varies considerably from one page to the next.

To handle this flood of images, Thomas Knüwer, editor in chief of the first test issue of the German Wired, and his art director Markus Rindermann have dug deep into the Wired archives. For example, a text by the IBM manager Gunter Dueck dealing with the question of whether the Internet has destroyed our memory is illustrated with an image of a clockwork "brain" that already adorned the cover of the US edition -- back in July. In general, German readers of the English-language Wired -- not a huge group, it has to be admitted -- will find plenty they have seen before, including a graphic about the networks of transnational organized crime (from February), a (very short) photo series about the inside of nuclear power stations and a robotic vacuum cleaner test. On top of that, they will recognize several of the smaller pieces that make the magazine such a pleasure to dip into, such as a short piece with explanatory graphics about three legendary movie stunts.

The recycling principle is part of Wired's approach to its international expansion. But it also reveals what the German edition is lacking: Being up-to-the-minute is clearly not the top priority. For a magazine that deals with the extremely fast-moving digital world, that can sometimes be a problem. Several months ago you could, for example, already read elsewhere -- including on SPIEGEL ONLINE -- that Tetsuya Mizuguchi's video game "Child of Eden" is an abstract masterpiece. True digital hipsters will not find much that is new in the German Wired.

At the same time, some of the contributions by the German (guest) authors give the impression that they are trying to convince readers that they should be interested in the digital world -- despite the fact that they have already bought the magazine. The Internet and all things digital are praised to the skies, as if the magazine wants to definitively conclude the debate about the impact of the digital revolution right in its first issue, through sheer weight of arguments. The long cover story, which is intended to make the term "geek" socially acceptable in Germany, sometimes becomes tedious in its missionary zeal.

At the same time, it seems safe to say that anyone who is buying Wired probably became a digital convert a long time ago. Bearing that in mind, the profiles of some of the featured model "geeks" are a bit on the short side. The reader learns little more about the quantum optics expert Christine Silberhorn than the fact that she would like to develop quantum computers, and that it has something to do with red and green lasers.

Some of the German edition's other original features are more interesting, such as a piece about the sex network Badoo or a reportage about the so-called "darknet," the darker corners of the Internet which do not show up on Google and where you can even order marijuana (let's see whether the Munich police decides to pay a visit to the magazine's editorial offices). This is something that Wired has always excelled at: long, well-written and meticulously researched features on issues that you seldom encounter anywhere else.

The only problem is that these features are simply too short. Badoo only gets two pages of text (but lots of symbolic photos), while the piece about the darknet is only one page long. Not a single user of the swinger network Badoo is quoted in the story, even though that would have been immensely interesting, and the darknet piece is over almost as soon as it has begun. The longest story in the issue is on the most boring topic: the future of motoring. But it fits nicely with the elaborate four-page car ads at the front of the magazine, which are barely distinguishable from editorial content.

In some places, especially reading the longer pieces, which are still too short, you realize that the first issue must have been created under great pressure. But that doesn't need to be the case in the future. If the first issue does well, then hopefully the next will be a little more relaxed.

At the moment, the German Wired is only being sold bundled with the local edition of the men's magazine GQ, something that many Internet pundits have criticized. But more than 70 percent of the readers of the US edition are male, Conde Nast Germany's managing director Moritz von Laffert revealed in an interview to mark the launch. In the future, Wired will be available on German newsstands for a price of €3.80 ($5.30). Naturally there is also an iPad app.

Despite the criticisms of the debut issue, we wish the German edition of Wired well. It's certainly a good read. Germany is currently lacking exactly this kind of tech-friendly, future-oriented reporting and the kind of playful approach to the possibilities of the digital present that Wired has done so well since the early 1990s. Such a nice-looking magazine on such nice paper is the perfect addition to the urban digerati's coffee table. 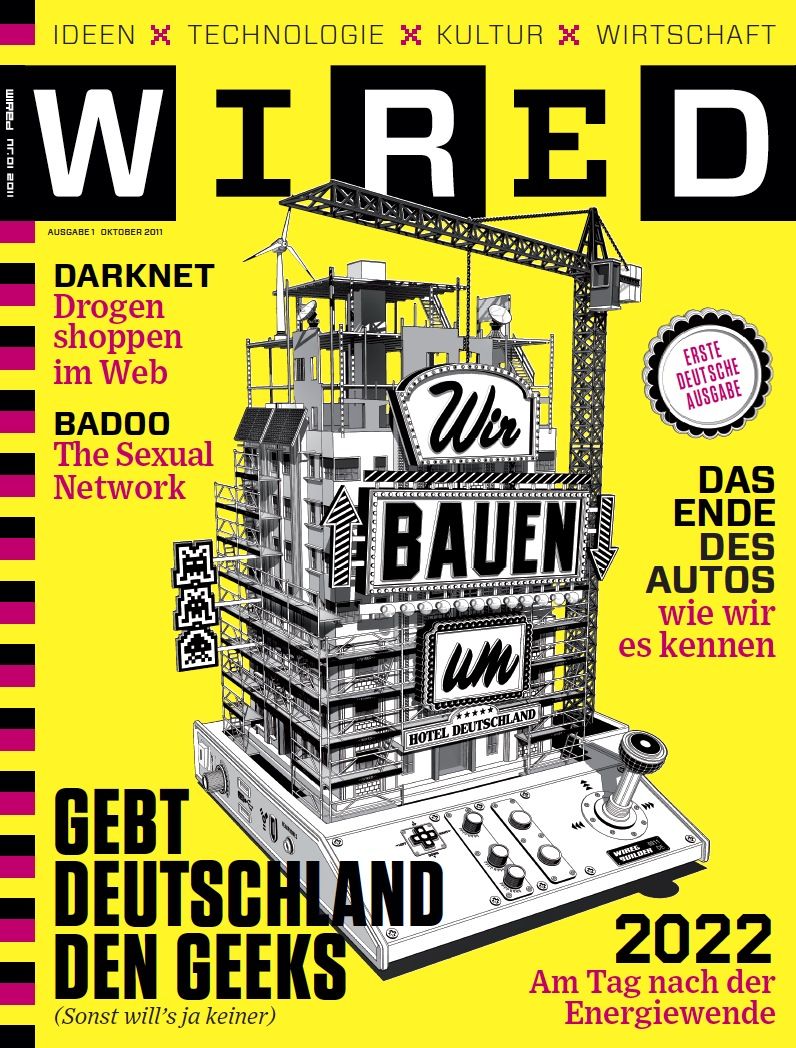 The cover of the first issue of the German Wired.