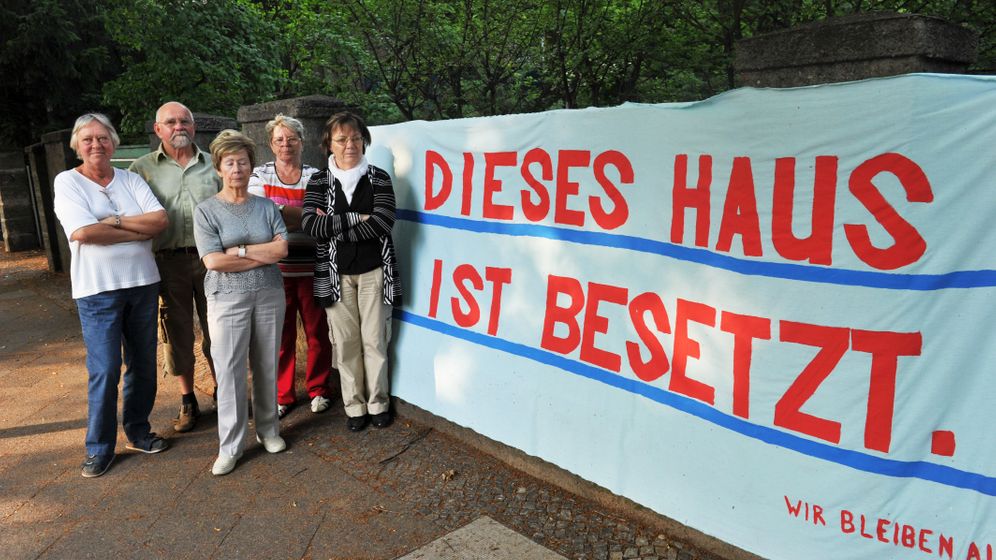 Germany's capital is famous for its squatting culture. Back in the 1980s, punks moved into disused buildings in what was then West Berlin. After the Wall fell, the movement spread to the eastern part of the city, where squatted buildings became a hallmark of the techno-fuelled counterculture of the 1990s.

But the city has definitely never seen squatters like the ones currently occupying a villa in the northeastern district of Pankow. A group of senior citizens has taken over a community center to stop the local municipality from closing it down -- and they're determined to stay until they get what they want.

The squatters, who are all in their 70s or 80s, have been sleeping in the building -- called "Stille Strasse" after the street on which it is located -- since last Friday. They take turns sleeping there on air mattresses and cots, with six or seven people staying there every night to stop local authorities from barring its entrance. Posters and banners reading "We are all staying" are on display outside.

Surprised by Their Own Reserves

The local authority decided to close down the community center -- where senior citizens have met to play chess and canasta, to exercise and to take art classes -- despite months of protests. According to the municipality, the building costs €60,000 ($74,000) a year to run and needs over €2 million in renovations, which the authority claims it cannot afford. Over 300 people between the ages of 65 and 96 currently use the facility.

The municipality clearly didn't expect such a spirited reaction. "Senior citizens squatting a building is a first for us," Jens-Holger Kirchner, the local deputy mayor and a member of the environmentalist Green Party, told the Süddeutsche Zeitung.

Doris Syrbe, 72, is one of the leaders of the group and claims to be "the youngest and the pluckiest" of the squatters. "We are surprised ourselves at how much energy we still have at our age," she told SPIEGEL ONLINE in a telephone interview Thursday.

The occupiers are in good spirits, she says. "All the people who come to see us give us added encouragement. The campaign is getting bigger and bigger."

Despite her enthusiasm, Syrbe admits that it hasn't been all that comfortable sleeping on her hard cot. "I think that I will have a few bruises by the time the campaign is over," she says. "But we have committed ourselves to doing it, and now we're going through with it."

Donations of Cakes and Stews

It's safe to say these are not the usual hard-partying Berlin squatters. Journalists who have been to the house report that it is spotless and well-organized. "We get up at 6.30 a.m. and have breakfast," says Syrbe.

The protesters have been getting a lot of outside support. "You wouldn't believe how much solidarity we have received," Syrbe says. Visitors have brought them food, such as strawberries and cherries, the owner of one local restaurant has donated stews, and three 16-year-old boys even brought them a homemade cake, she says. "Our fridge is almost bursting at the seams," she adds. They also have a television set and Internet access provided by a sponsor. "We really couldn't have it any better."

With so many people in the building, the squatters sometimes get on each others' nerves, Syrbe admits. "But then we send that person into the garden and he takes a break," she says, "and then things are fine again."

The campaign has already received considerable media attention in Germany, particularly after an incident on Wednesday. Police were called after a municipal janitor who had come to the villa got into an altercation with a young backer of the squatters. Syrbe played the incident down. "There was a little scuffle, but nothing really worth talking about," she told SPIEGEL ONLINE. "The janitor had a small scratch on his finger."

The building's interesting history actually goes back decades. The family of Erich Mielke, the former head of the feared East German secret police, the Stasi, lived in it at one time. It was later used by the Stasi itself.

The villa is located close to the Majakowskiring, an ellipse-shaped street in Pankow on which many of the East German political elite once lived. Nowadays, the area is popular among affluent families attracted by the single-family homes and green spaces.

The municipality wants to sell or lease the Stille Strasse property, which would probably fetch a high price on the open market given its desirable location. It has offered to relocate the courses for senior citizens to other facilities, but they want them to stay where they are.

The occupation is an example of the ongoing resistance to gentrification in Berlin. In recent years, the city has seen street demonstrations and campaigns against rising rents and the exclusion of low-earners from desirable central areas. Several high-profile squats have also been forcibly evicted in recent years.

In this case, protest organizer Syrbe is confident that a peaceful solution will be found. "It will be possible to find a way to enter into dialogue with the local authority. Maybe we will be able to find a compromise," she says. "We want to stay together -- that's our goal. It doesn't matter where."

With reporting by Hendrik Ternieden