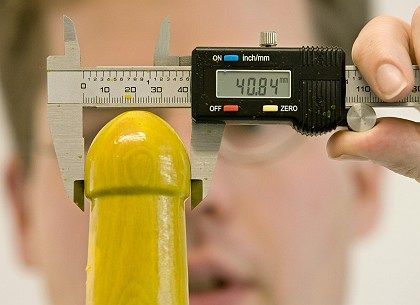 Jan Vinzenz Krause of the Institute for Condom Consultancy conducting measurements for his spray-on condom.

A German condom expert has developed a "spray-on condom" system in the form of a pump that squirts out liquid latex through a multitude of nozzles that cover the erect member with a latex sheath in a matter of seconds.

"If you go into a drug store to buy condoms, the ones they sell are mainly suited to men with the average penis length of 14.5 centimetres (5.51 inches), but a lot of people have penises that are smaller or larger than that," Jan Vinzenz Krause, director of the Institute for Condom Consultancy, told SPIEGEL ONLINE.

"We thought why not come up with a condom that fits the man rather than vice versa? This would represent a revolution in the condom market," said Krause, whose institute gives sex education as well as providing advice on AIDS prevention and contraception.

He has filed for a patent for the latex spraying system he invented. "As far as I know our idea is unique," said Krause.

He admits he will have to overcome some legal hurdles and technical niggles before he can bring the product to market, but he already has a working prototype and says the system can cater for most sizes.

"With our technology we could spray a condom on an erect elephant," he declared, not without a hint of pride.

The system works a bit like a car wash. The man put his penis in a chamber and presses a button to start the jets of liquid latex, sucked from a detachable cartridge. The rubber dries in seconds and is later rolled off and discarded like a conventional condom.

The aim is for the process to take just 10 seconds but at present the latex drying time is around 20 to 25 seconds. "We're working to shorten that time," said Krause.

"In a survey we conducted, men had a two-fold reaction to the idea. Some said it's a great idea and would help them because they can't find conventional condoms that fit them. Others say they can't imagine it working in practice. There's the romance factor: applying the condom does interfere with the sex act."

The machine applies the latex with a hissing sound.

The spray-on condom will be more expensive than conventional ones. The chamber will cost around €15 to €25 ($22-36) and the liquid latex refills, which produce between 10 and 20 condoms depending on size, will be priced at between €7 and €10. That amounts to around €1 per condom, compared with around 50 cents per conventional sheath.

Krause said the market launch will take time because condoms are classified as medical products that require lengthy approval procedures. He said he had seen another product call a spray-on condom but that consisted of a sperm killing chemical and wasn't a mechanical contraceptive.

To those who doubt his invention, Krause points out that inventors and scientists have had to battle skeptics throughout history.

"The theologian Giordano Bruno was burnt as a heretic because he suggested that the earth revolves around the sun," his institute says on its Web site. "Skeptics have a long history. Those who dare to take new routes have always had to battle the defenders of the status quo."

The condoms will be available in red, green, yellow and transparent, but they won't come in different flavors. "For that one will have to use a flavored lubricant," said Krause.