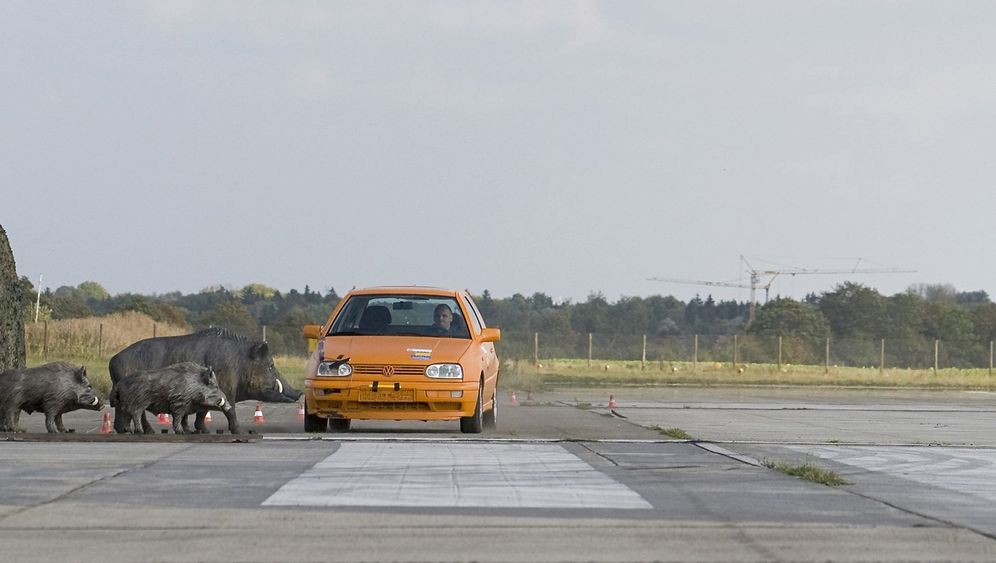 A total of 27 people died and 3,000 were injured in a quarter of a million collisions with wild animals on German roads in 2009, not to mention the hundreds of thousands of animals that perished in the process, ADAC, the largest automobile club in Europe, said on Tuesday.

It's a growing problem because the population of wild boars in particular is increasing in Germany and Europe.

ADAC conducted some a spectacular crash test to measure the impact of vehicle collisions with a horde of wild boar at various speeds. It refrained from using real wild boars for the purpose, resorting instead to life-size models of a sow and her two chubby piglets.

"The collision with a horde of wild boars at 80 kilometers per hour (50 miles per hour) needn't be life-threatening for the people inside the vehicle," ADAC said in a statement after conducting the test. "The front of the vehicle was damaged but the passenger cell remained stable."

Unfortunately for the animals that stray onto roads, ADAC recommended that drivers do not swerve to avoid them. Trying to spare the animal's life by shifting to the opposite lane entails the far greater danger of smashing into an oncoming car, it said.

"If a wild animal appears suddenly, apply the brakes as hard as possible, keep a tight grip on the steering wheel and stay in the lane," ADAC said. "In the worst case scenario, a collision with the animal has to be accepted."

Driving slowly, as always, minimizes the risks, and dipping one's headlights gives the animal a chance to run away. They get fixated by a strong light beam.

ADAC, the German Hunting Federation and the German Council on Traffic Safety on Tuesday called for an improved system of collating nationwide data on accidents involving wildlife so that troublespots could be identified more effectively, and the incidence of accidents can be reduced.

"Every 2.5 minutes a deer is run over and for rare species like wildcats, road accidents are the No. 1 cause of death," said Wolfgang Bethe, the vice president of the hunting federation. "Animals don't know the highway code, that's why it's more important than ever to inform drivers for the sake of wildlife conservation and road safety."