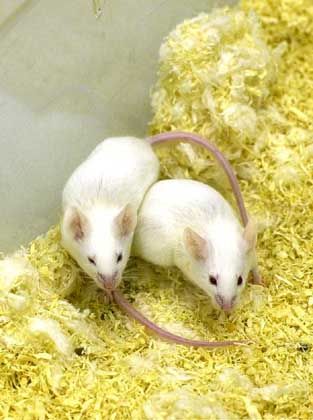 Police armed with traffic cones failed to catch the rodent.

A German man who spotted a mouse running across his living room floor while he was watching TV was so scared that he raced into the snow-covered street at 3:25 a.m. wearing nothing but boxer shorts, slippers and a blanket, police said.

"He alerted the police from a public call box," police in the central city of Göttingen said in a statement released late on Tuesday. "The 23-year-old man told the amazed officers that there was a mouse in his flat and that there was nothing he was more afraid of than the little rodents."

While the man waited outside, the helpful officers ventured into his flat armed with a number of traffic cones in an attempt to catch the mouse. "The furry rodent wasn't found despite an intensive search of all the rooms," police said.

The man decided he couldn't share his flat with the mouse and trudged through the snow to spend the night at a friend's house. "How the mouse spent the rest of the night remains a mystery," police said. "Maybe it came out of hiding and spent the night dancing on the table."