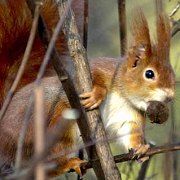 Most squirrels are harmless little creatures. But one aggressive squirrel went on the rampage on Tuesday injuring three.

Most squirrels are cute and harmless little scamps who are happy to jump around gathering nuts -- but on Tuesday one of the furry creatures launched a vicious and unprovoked attack, injuring three innocent members of the public.

The incident occured in Passau, a town in the state of Bavaria, Germany. Police report that the rampaging rodent jumped through an open patio door and bit an eldery lady on the hand. The squirrel clung on with such tenacity that the 70-year-old victim panicked and ran out into the street. It was only then that she managed to shake off the creature.

The animal then found its next victim: a 33-year-old construction worker, who received scratches to his hand and arm. But the man managed to defend himself and wasn't bitten.

According to a police spokesman, the furious squirrel then fled to an adjoining garden and attacked a 72-year-old man. But he had met his match in this particular pensioner, who killed the animal with his crutch.

The dead animal has been taken to a lab to be tested for rabies.

It was not the first incident of squirrel invasions in Germany. Just last year a family of raucous squirrels stormed an elderly couple's home in Germany, triggering an elaborate 90-minute fire brigade operation. But, although the squirrels didn't go without a fight, no one was injured in that incident.