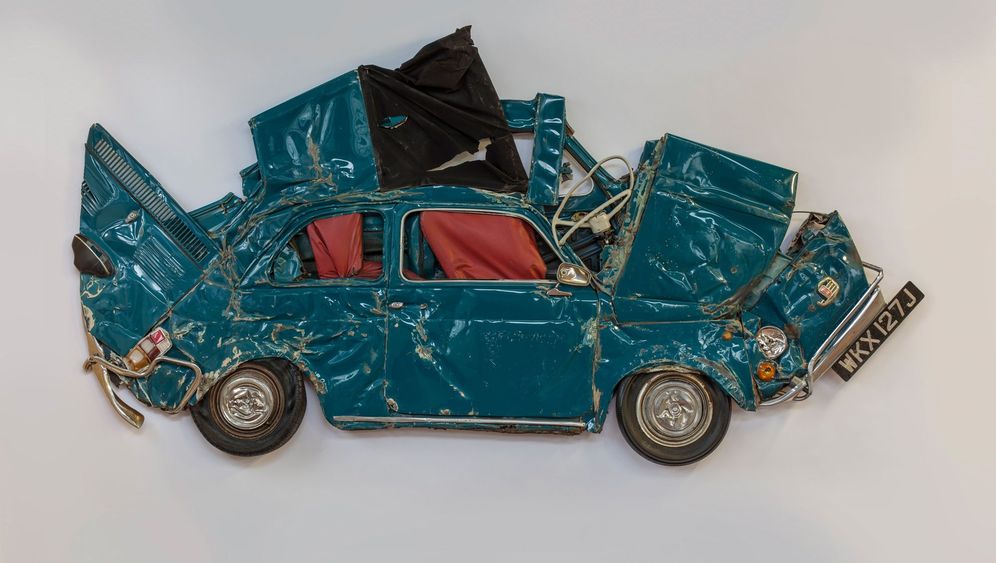 Ron Arad saved six real Fiat 500s. Then he flattened them. The Israeli architect and designer considers it proof of his love for the tiny Italian car. "I made them immortal," Arad says. "The cars will now last forever."

The flowery language works well with the title of his new exhibition, "Pressed Flowers," which is currently running at the Design Museum Holon in Israel. It is a nice reminder of childhood, of collecting flowers and sticking them in a thick book. A few days later they would be fragile and paper-thin, but would last an eternity. Arad used the same principle to press the cars, known as "Cinquecentos."

The designer and his team spent a morning flattening the old cars in the metal press of a shipyard in Groningen. "Normally, the press would be used to form ship's parts," Arad says. The unusual use of the press was so entertaining that shipyard workers brought their families to watch. "They made a real festival out of it," he says.

Before they were squashed, the motors and seats were taken out of the cars, and the tires were taken off. Each car was put sideways in the press and then smashed mercilessly. The result was a 12-centimeter-thick metal sandwich.

The astounding thing is that although the cars were completely destroyed, one is able to immediately recognize the model. Each of the colorful pieces of junk is a Cinquecento, there is no doubt about it. Only they look even more bizarre than before.

Arad says he used a "little makeup" on the squashed cars. For example, at the exhibit the designer hung the equally flattened tires under the cars and draped the folding tops where they had originally been.

The ability to recognize the cars lies in the fact that the form of the pressed cars is surprisingly accurate. "At first, I experimented with model cars and a small press," Arad says. The result was not the horrible lump he expected, but the contours of the flattened toy cars were so clear that they let the original design be seen. Arad was just crazy enough to try it with a real car, and he found the right shipyard.

But the effect would not have been as strong with just any car. It needed to be an icon like the Cinquecento, or what Arad calls, "the smallest object one can still call a car."

The Fiat 500 also served as a source of inspiration for the designer. "This car is an example of how refusing to compromise pays off," he says. "The Fiat 600 was, in comparison with the Cinquecento, more comfortable and I personally found it better looking. But it was also not uncompromisingly tiny, and no one talks about it anymore, in contrast to the Fiat 500." Arad says he tries to carry this uncompromising attitude over into his work.

According to Arad, "Pressed Flowers" is not meant as a criticism of cars, or congested cities and the polluted environment, even though a destroyed vehicle carries powerful symbolism.

"First of all, I wanted to turn something functioning into something useless, reversing the traditional production process," he says. "I now think that not everything in life has to serve a specific purpose and one shouldn't always have to function like a machine."

This message has clearly reached the young visitors to the exhibition. Arad says the nicest reaction he has received came from a boy.

"He sent me a video in which he was holding a picture he had drawn of a Cinquecento," he says. "I thought that was sweet." He says the best part came at the end of the video when the young boy takes the drawing and crumples it up.