Fortified by beer and schnapps, millions of costumed revellers braved snow and freezing temperatures to celebrate the climax of carnival on Rose Monday by lining the streets to watch processions across the predominantly Catholic Rhineland and southern Germany. 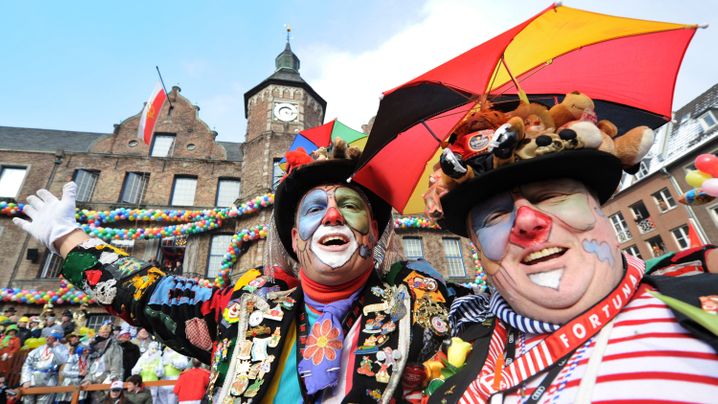 The biggest parade, in Cologne, attracted some 1.3 million people and was broadcast live on local television. Hundreds of thousands also turned out in the cities of Düsseldorf and Mainz and in smaller towns and villages to watch marching bands and to catch sweets hurled from decorated trucks, true to carnival's tradition of celebrating the onset of spring and preparing for the Lent fasting period with a huge party of food and drink.

Thousands dressed up in furry cow and bear costumes to keep out the cold, but there was also an abundance of clowns, cowboys and Indians, as well as a few Michael Jacksons.

The processions in Cologne, Düsseldorf and Mainz are famous for their political satire. One float showed a papier-mache figure of Italian Prime Minister Silvio Berlusconi drowning happily in a sea of breasts. Chancellor Angela Merkel wasn't spared either, with a Düsseldorf float showing her as a nude Eve attracted by the forbidden fruit of state debt. In Cologne, US President Barack Obama was portrayed upside down as a winged redeemer who has fallen back to earth.

The south-western towns celebrate a more traditional form of carnival, and the procession in the Black Fores town of Rottweil is particular famous for its vintage costumes, some of them 100 years old.

The party isn't over, even though thousands of revellers will be suffering from an accumulated hangover from six days of uninterrupted revelry which started last Thursday, Old Wives' Day, when women traditionally usher in carnival by going around cutting off men's ties in symbolic castration.

The Rhineland comes to a standstill for carnival. Many firms shut down altogether until Ash Wednesday, and people make themselves conspicuous if they enter a pub not dressed in costume. Local bands vie with each other to compose singalong carnival hits which in past years have included such gems as "Pizza Wunderbar", "My Pig is Gone," and, literally translated, "Let us Leave the Cathedral in Cologne," which sounds a bit pithier in the local Rhineland dialect.

Carnival has various roots, including a Roman celebration of the onset of spring, Germanic fertility rites as well as the Christian tradition of celebrating Lent.

There's still a good deal of partying going on this Tuesday, with many intent on getting drunk one last time before it's all over on Ash Wednesday, when Germany will return to its orderly, sedate, serious self for the next 51 weeks.