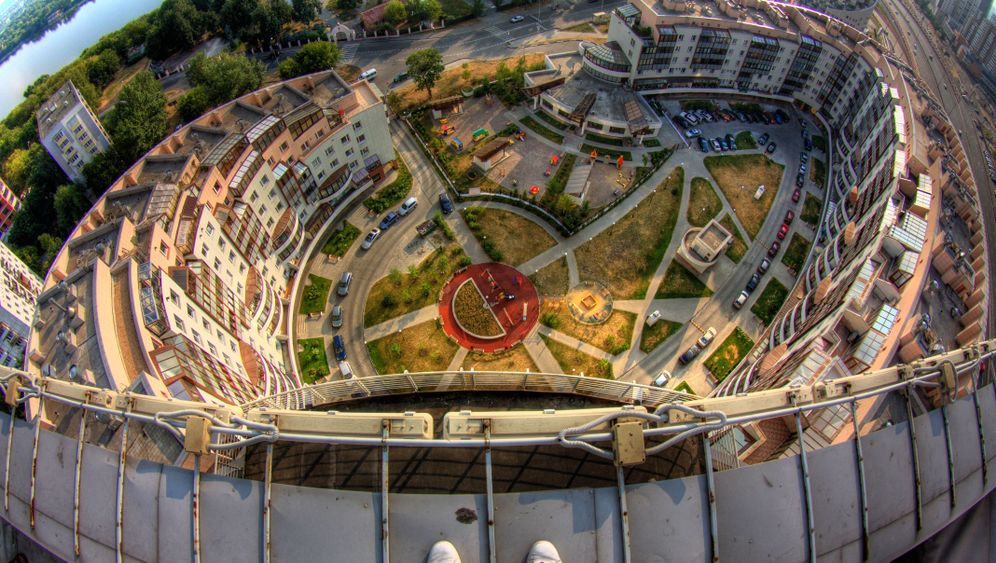 Photo Gallery: Moscow from on High

Marat Dupri is the master of Moscow's skies. Breathtaking photographs of his climbing adventures on the highest and most heavily guarded buildings in the Russian capital have made him a household name across the country. In 2011, one of his photos from on high was awarded the "Best of Russia" prize. Since then, the media has dubbed him the "skywalker."

Born on October 25, 1991, Dupri belongs to the generation in Russia that grew up after the breakup of the Soviet Union and only learned about communism through textbooks.

Now he recounts to SPIEGEL ONLINE how it feels when he scales Moscow's tallest buildings, doing what some call "roofing." Dupri discusses his dream of living abroad and why he admires Vladimir Putin, Russia's prime minister and president-elect, just as much as Mikhail Khodorkovsky, Putin's imprisoned oligarch rival:

"I was born shortly after the attempted putsch against Mikhail Gorbachev in 1991. My parents tell me that there was nothing to buy in the stores at the time and that misery prevailed throughout the country. It snowed on the day I was born, and water dripped through the hospital's ceiling.

I was a sickly child, and didn't develop well due to a lack of vitamins and environmental pollution. I had a weak heart. The doctors told me I couldn't play sports; it was like a lifelong punishment.

I often went to see movies, but I found them boring. Then I searched online to see what kinds of subcultures were out there. I found 'roofing' exciting, and I found someone who took me onto my first roof. I had to climb 48 stories to get to the top of the building. I was tired after that, but happy. Roofing has kept me healthy. My heart beats better.

The Happiest Person on Earth

What we do is a bit anarchistic. We defy the security guards. When we go onto especially well-guarded buildings, we sometimes get arrested ... even by agents of the the FSB and FSO (ed's note: Russia 's domestic intelligence agency and presidential security service, respectively).

I'm studying law in Moscow. If they arrest me again, I know which statutes they can really charge me with violating and which ones they're just trying to intimidate me with.

When you stand in front of a building, you can't hesitate, you can't doubt. I recently climbed to the top of the statue of Peter the Great in the center of the city one night -- 100 meters (330 feet) up and onto his head. We climbed up while the guards were sleeping. A weather vane was spinning in the wind on the very top. Below, the sun was slowly rising over Moscow. The city was asleep, and it was like life was frozen. I was the happiest person on Earth. I only need to look down to forget all my problems.

At such times, I experience a sensation of freedom. No one can disturb me. No one tells me what's good and what's bad.

The most important rules for us roofers are: Climb sober because you can easily fall. Be nice to the people living in the houses you're climbing. Be a good citizen.

'The Entire State Is Thoroughly Corrupt'

I'm not all that interested in politics. I'm happy that Putin won the presidential election. He's the most honest and proven politician in our country, and he has led us out of the crisis. On the other hand, the entire government is thoroughly corrupt.

I'm also struck by the fate of Mikhail Khodorkovsky. I was 12 years old when he was arrested. I saw him on TV, when he was paraded in front of the cameras looking scared. My father said he was a bad person.

I think he went to jail for his convictions. He's sitting in prison because he told the truth. The verdict against him was fixed. That was also one of the reasons why I decided to study law.

Whenever I'm away from Moscow for two weeks, I get depressed. But I still think I will leave the country. Ideally, I would like to live in Switzerland, where everything is so well-arranged and orderly."