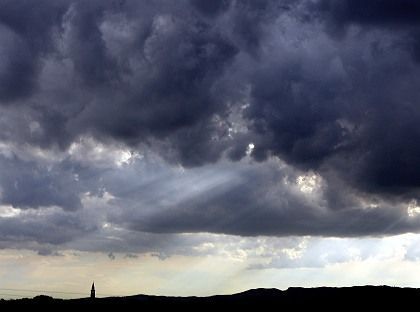 A Romanian convict's lawsuit against God was thrown out because God apparently does not have a legal residence.

Many people have felt let down by God at one time or another while suffering from life's slings and arrows, including among others Jesus, who famously asked his divine father "Why have you forsaken me?" while suffering on the cross.

However few have sought retribution in the law courts -- and perhaps with good reason, as one Romanian man has found out. The convict tried to sue God but had his case turned down -- because God does not have a legal address and so cannot be taken to court.

Pavel Mircea, who is serving a 20-year sentence for murder, filed a lawsuit in the western Romanian town of Timisoara against God for not protecting him from the Devil. He claimed that he had concluded a contract with God at baptism but God had not kept his side of the bargain. "He was supposed to protect me from all evils and instead he gave me to Satan who encouraged me to kill," he claimed.

In the written lawsuit, the convict had put "God, resident in heaven, represented in Romania by the Orthodox church" as the defendant, reported the Romanian daily Evenimentul Zilei.

The plaintiff cited five paragraphs from the Romanian criminal code describing the crimes which God had allegedly committed, including fraud, breach of trust, abuse of a position of authority and misappropriation of goods. God had not fulfilled his side of the contract, Mircea claimed, because he had accepted prayers and sacrificial offerings without providing any kind of services in exchange.

The public prosecutor's office in Timisoara turned down the case, arguing that God is not a person in the eyes of the law and does not have a legal residence.

Constantin Stoica, the spokeswoman for the Romanian Orthodox patriarch in Bucharest, told reporters Thursday that the prison chaplain will be given the difficult task of explaining to the man "that God does not act without our will and that people have the freedom to choose between good and evil."