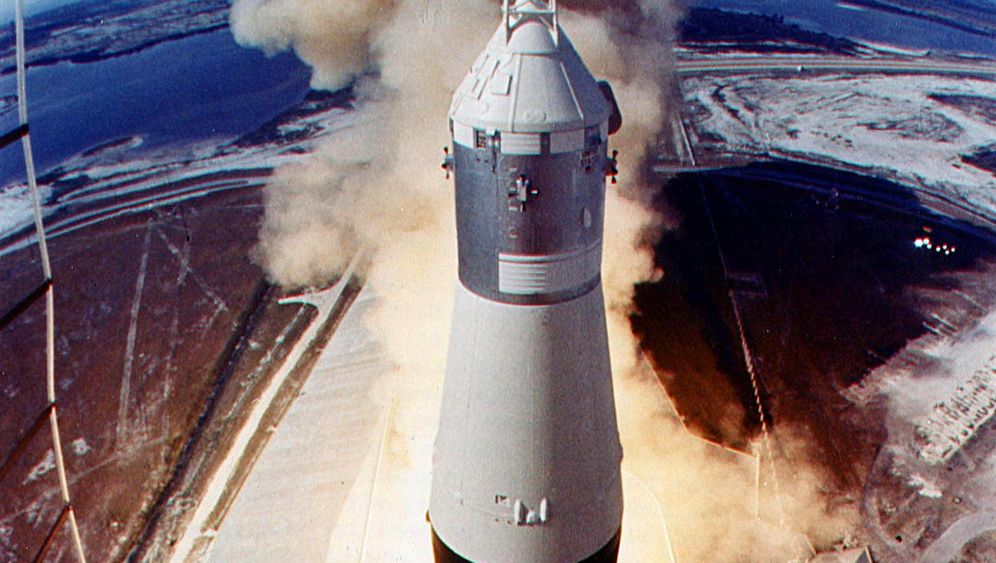 There is an unwritten law in America's national parks: Carry out what you bring in.

When they visited the moon, though, the Americans weren't nearly as considerate or in touch with nature. Astronauts Buzz Aldrin and Neil Armstrong left behind more than 100 items when they left the moon on July 21, 1969, at 5:54 p.m., Earth Time. The items included four urine containers, several airsickness bags, a Hasselblad camera, lunar overshoes and a complete moon-landing step.

The mission was historically significant. But are the urine containers?

California historic preservationists think so. They recently registered the remains of the Apollo 11 mission in the so-called Sea of Tranquility as an "Historical Resource." The designation gave a boost to an academic discipline that has been considered irrelevant until now: space archaeology.

'A Sacred Site of World History'

"It's about time that we acknowledged the importance of these sites for mankind," says Beth O'Leary, an anthropologist at New Mexico State University and the co-founder of the Lunar Legacy Project. O'Leary and her colleagues have compiled a map identifying the items left at the landing site, as well as a comprehensive list of Apollo's junk.

Space archaeologists are worried that future missions, or possibly moon tourists, could loot and even destroy this "sacred site of world history."

"Can you imagine someone driving a cart over Neil Armstrongs first footprint?" warns Peter Capelotti, an anthropologist at Penn State University in Abington, Pennsylvania. The artifacts of human missions to the moon and Mars are urgently in need of official protection, says Capelotti, "otherwise we must be prepared to someday see pieces of Apollo 11 listed for sale on eBay."

The vast expanses of the solar system already resemble an extraterrestrial museum of technology, with an inventory of thousands of tons of space junk. Mars, for example, is home to an entire fleet of the legendary Rovers. In 1995, a probe from NASA's Galileo satellite was even suspended from a parachute in Jupiter's atmosphere. However, it quickly lost its archaeological value when it shattered at 150 degrees Celsius (302 degrees Fahrenheit) and 22 bar of pressure. Even if individual splinters survived the crash, the gas planet most likely absorbed them.

100 Tons of Scrap Metal and Plastic

Conditions are more favorable on the moon, where about 100 tons of scrap metal and plastic are waiting to be catalogued by the guardians of our cultural heritage. The most attractive objects include the remains of the Soviet Lunik 2 space probe, which crashed into the moon at 12,000 kilometers per hour (7,500 miles per hour) in 1959; dozens of small Soviet emblems shed by the probe shortly before impact; the first moon vehicle, brought to the moon on the Apollo 15 mission in 1971, and now parked near the Hadley Groove; and, finally, the golf ball that US astronaut Alan Shephard hit about 300 meters (984 feet) with a six-iron near the Fra Mauro crater on Feb. 6, 1971 -- not bad for a one-handed stroke in an uncomfortable space suit.

Most important, however, are the remains of the legendary Apollo 11 mission. Aldrin and Armstrong left behind a veritable mountain of junk. O'Leary's map shows, for example, a gold replica of an olive branch very close to the landing module, as well as a laser reflector, a seismic measuring device and the astronauts' clunky "space boots."

The moon astronauts' tracks are mapped, as is the "area of intense human activity" and the "toss zone" -- a.k.a. the garbage dump. Everything is presumably well preserved, because the absence of an atmosphere means that there is no air movement on the moon.

But why did Aldrin and Armstrong leave the materials behind in the first place? "They were told to jettison things that weren't important," says O'Leary. They had to create storage space for dusty soil samples and valuable moon rocks. The US flag and the plaques were already meant for eternity, but no one thought of embedding them in concrete at the time, a circumstance that could prove to be disastrous for these one-of-a-kind lunar specimens.

A Future Fairground for Spain Tourists?

The moon archaeologists fear that the Sea of Tranquility will eventually be transformed into a fairground for space tourists. Wealthy adventurers could soon visit the moon and, in their chic space overalls, desecrate the US airsickness bags.

And what happens if Chinese astronauts decide to make off with Buzz Aldrin's "A7L" portable life support system? "Besides, they'll all want to be photographed standing in front of the US flag," says anthropologist Capelotti.

John Campbell, an archaeologist at James Cook University in Australia, is also concerned about "uncontrolled sampling" or even "outright treasure hunting." "We've now got really one of the most important sites in human history," he adds, "and, unfortunately, it has no protection."

California has now embarked on a campaign to change that. Its preservationists are not overly concerned about the fact that the site is about 380,000 kilometers (236,121 miles) beyond the state's borders. After all, they say, many Californians were involved in the Apollo mission.

New Mexico, Florida and Texas are contemplating similar steps. The moon archaeologists, for their part, hope that all of this will culminate in the Apollo 11 landing site becoming a national monument and, eventually, a UNESCO World Cultural Heritage site.

Who Owns the Moon?

The question of who exactly owns the moon will have been raised by then, if not sooner. The somewhat vaguely worded 1967 United Nations Outer Space Treaty states that "space debris" remains the property of the country that shot it into space. Lunar real estate, on the other hand, can be neither government nor private property. This creates a dilemma that urgently needs to be clarified. Armstrong's footprint clearly belongs to the United States, but what about the moon dust into which the imprint was made?

Fortunately, when it comes to other objects, such disputes are unnecessary for the foreseeable future. The Pioneer 10 space probe, for example, flew past Jupiter in 1973 and then embarked on a course toward the star Aldebaran in the constellation Taurus. When it gets there, there will undoubtedly be a spectacular crash, which will transform Pioneer 10 into an archaeological site of paramount importance.

But that won't be happening for another 2 million years.