The most subversive criticism of capitalism at the moment comes from the small town of Aspach, in the Swabian-Franconian Forest, a region of southern Germany known for its industrious and energetic inhabitants. Kai-Markus Müller is sitting in his office in a nondescript building, thinking about the coffee-roasting company Starbucks. "Everyone thinks that they've truly figured out how to sell a relatively inexpensive product for a lot of money," he says. "But the odd thing is that even this company doesn't understand it."

Müller, a neurobiologist, isn't criticizing working conditions at the multinational purveyor of hot beverages. Instead, what he means is that the Seattle-based company gives away millions of dollars a year out of pure ignorance. The reason? Starbucks isn't charging enough for its coffee.

It's an almost obscene observation. Müller is convinced that customers would in fact be willing to dig even more deeply into their pockets for products for which Starbucks already charges upmarket prices.

The brain researcher is also a sales professional. Müller used to work for Simon, Kucher and Partners, a leading international consulting firm that helps companies find suitable prices for their products. But he soon lost interest in the job when he recognized that "classic market research doesn't work correctly." From the scientist's perspective, research subjects have only limited credibility when they are asked to honestly state how much money they would spend for a product.

Instead, Müller is searching for "neuronal mechanisms," deeply buried in the human brain, "that we can't just deliberately switch off." In fact, there is a center in our gray matter that monitors proportionality independently of reason. This brain region functions according to simple rules. For instance, coffee and cake makes sense, while coffee and mustard triggers an alarm. Experts recognize the unconscious defensive reaction on the basis of certain waves that become visible with the help of electroencephalography (EEG). Do these graphs also reveal something about consumers' willingness to pay for products?

Using the example of a small cup of coffee, for which Starbucks charged €1.80 ($2.45) in Stuttgart, Müller tried to get to the bottom of the question. He showed subjects the same pot of coffee on a screen several times, but with different prices in each instance. At the same time, an EEG plotted the subjects' brain activity.

Graphic: The Price Is Right

Especially in the case of extreme offers, strong reactions appeared in the brain within milliseconds. Prices that were either too low or too high, such as 10 cents or €10 per cup, were unacceptable to the brain's control mechanism. "When the brain was expected to process unexpected and disproportionate prices, feelings of shock, doubt and astonishment manifested themselves," Müller reports.

Is Starbucks Missing Out on Profits?

According to the study results, the subjects would be willing to pay between €2.10 and €2.40 for a cup of coffee, which is significantly more than Starbucks actually charges. "In other words, the company is missing out on millions in profits, because it is not fully exploiting consumers' willingness to pay money," Müller concludes.

Together with scientists from the Munich University of Applied Sciences, Müller took the experiment a step further. The team of researchers had a vending machine installed in front of the university dining hall, where students could buy coffee for 70 cents and cappuccino for 80 cents. There was no fixed price for a latte macchiato. Instead, students were given the chance to decide for themselves how much to pay for the beverage.

Several weeks and hundreds of hot beverages later, the average price for the popular Italian drink among the Munich students had leveled off at 95 cents. Then Müller went into the laboratory with a smaller subject population. Once again, the subjects were shown prices and their brain waves were measured. The astonishing result was that, on average, the brain signaled its consent at an average price of 95 cents -- apparent proof that the ideal price for a product can be determined without any polling whatsoever.

"A study like this has never been done before, even though scientists have been studying brain waves for decades," says Müller. However, some consumers are likely to be horrified by what supporters of so-called neuro pricing are already calling a revolution in marketing: the determination of a feel-good price on the basis of brain testing in the laboratory.

From the perspective of the neuroscientist, however, the fear of the transparent customer is unfounded. "Everyone wins with this method," says Müller. He cites as evidence the tremendously large number of flops in the consumer economy. About 80 percent of all new products disappear from shelves after a short time, never to be seen again. 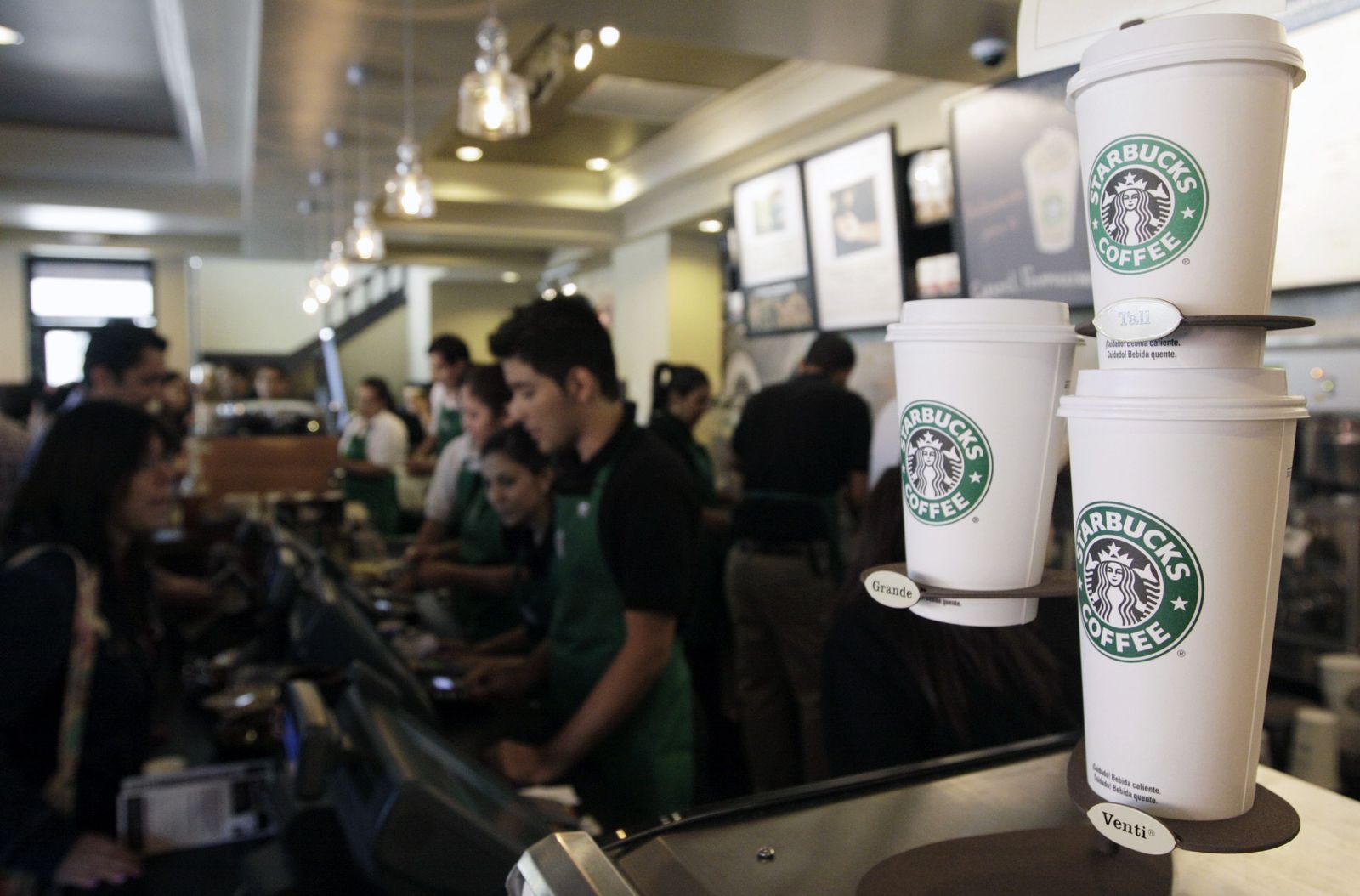 After conducting brain wave tests, a German scientist believes Starbucks charges too little for a small cup of coffee. 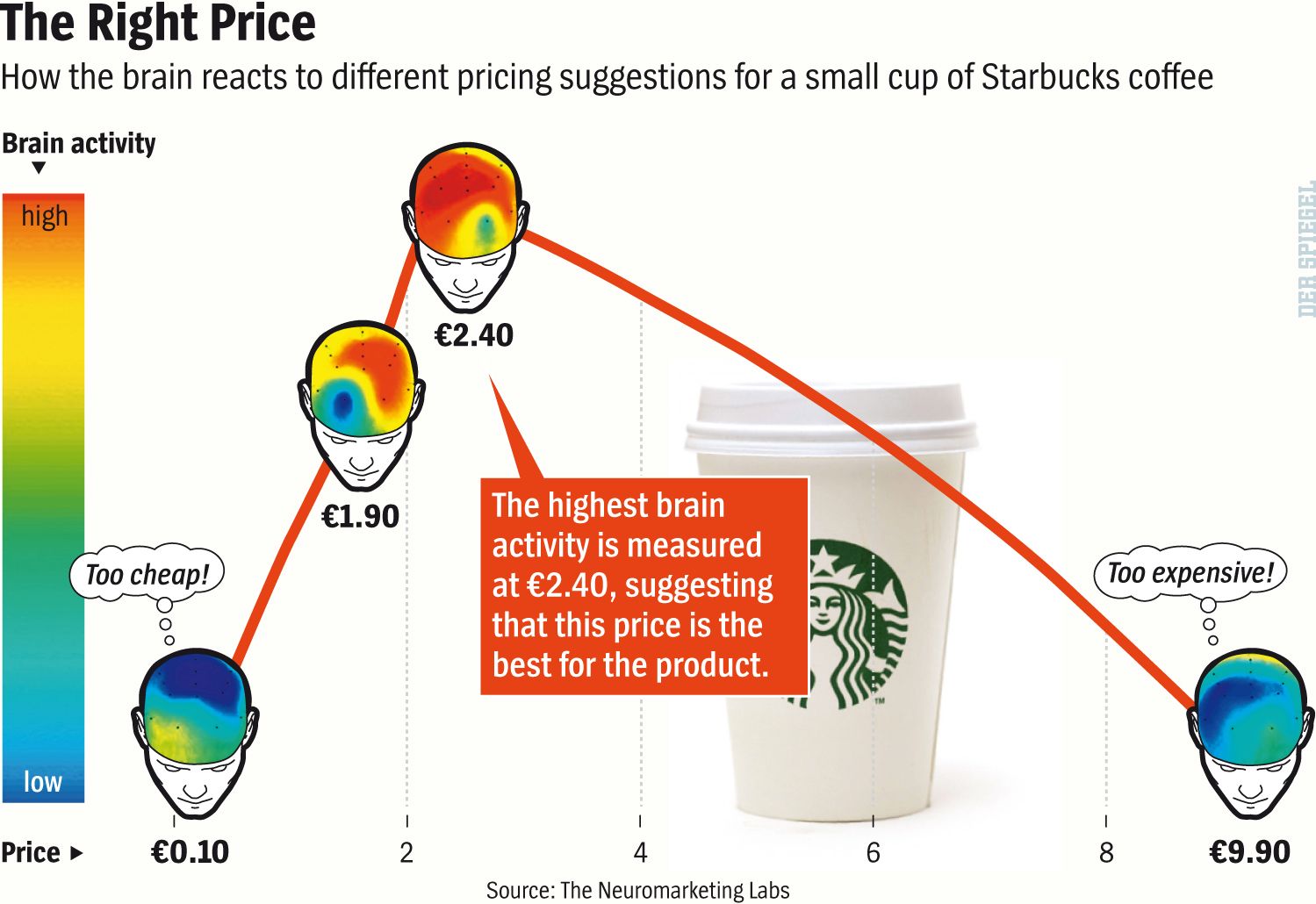 Graphic: The Price Is Right