The faraway world exists in constant twilight. Although its nearby blood-red dwarf star only provides one tiny fraction of our sun's light, its warmth might still be enough to create a life-sustaining climate.

But is there really life on this newly detected planet? Nobody knows -- at least not yet. Only one thing is certain: Because of the darkness, animals and plants would look different from the ones we know from Earth. Trees and shrubs would have pitch-black leaves, as if they'd been burned. The alien flora would need to be darkly colored to use the dim starlight for its photosynthesis.

And what about higher forms of life, like animals or intelligent beings? It's very possible that exotic organisms exist on the planet. Given that it is several million years older than the Earth, it would have had enough time for life to develop.

On the other hand, it would also have to repeatedly withstand hellish conditions. Its sun is a so-called flare star, a cosmic fire-breather that tends to produce apocalyptic eruptions of plasma. All of the planet's oceans, rivers and lakes may well have long since evaporated.

The newly discovered planet doesn't yet have a name, but the red dwarf star around which it circles is famous: Proxima Centauri, our nearest fixed star, only 4.24 lightyears away -- our sun's closest neighbor.

That's what makes this finding so scientifically exciting. At this point, the discovery of planets that are illuminated by distant stars isn't much of a novelty anymore. Over 3,000 "extrasolar planets" have been discovered in the last few years. But most of them are many hundreds of lightyears away, and are nearly impossible to further investigate. Proxima's satellite is different: Never before have planet-hunters come upon another possible Earth that is so nearby, offering researchers the opportunity to actually search for traces of life.

The European Southern Observatory (ESO) plans on making the discovery, which has thus far been kept secret, public by the end of August. "It was hard work finding the tiny celestial body," an astrophysicist who was involved in the search told SPIEGEL. "We were at the limits of what is technologically possible when it comes to measurements."

The successful search project is called "Pale Red Dot." The name is a reference to the legendary "Pale Blue Dot" photo that the Voyager 1 space probe took in 1990 when it was in the process of leaving the solar system forever. Its photo shows the Earth as a tiny blue dot. The researchers wanted to find a corollary red twin Earth -- and they seem to have succeeded.

The search for planets was conducted using a specialized reflector telescope that the Europeans operate on a mountain called la Silla in the Atacama Desert in Chile. At the start of this year, the space researchers began to direct the instrument at Proxima Centauri, which cannot be seen with the naked eye. For months, they repeatedly recorded its dim starlight and the highly sensitive measurement instruments ultimately discovered that the dwarf star lurches suspiciously from side to side.

At this point, the data-evaluation process has been completed. For the astrophysicists there is no doubt left: The dance of the dwarf star is caused by an unseen companion tugging at Proxima Centauri. The planet's calculated mass suggests that it is rocky, like the Earth.

Even more exciting: It moves so close to the small red sun that liquid water could exist on its surface, which is thought to be a decisive factor when it comes to the possibility of life.

The researchers' next big goal is logical. They want to determine whether the planet truly is an oasis in space. In order to do that, light from the planet would need to be intercepted and used to determine the chemical composition of its distant atmosphere.

The simultaneous presence of oxygen and methane would be enough to indicate life. Both gases react with one another to create carbon dioxide and water. In a barren atmosphere, oxygen and methane only exist in small amounts. If the levels are high, then organisms like bacteria or algae that produce the two gases must be present -- it would be a kind of chemical fingerprint proving the existence of extraterrestrial life.

This kind of breakthrough discovery would make Proxima Centauri a tempting target for an interstellar research mission. Unfortunately, however, even this closest star is still unreachably distant.

Using today's rockets, the distance between the stars is almost impossible to traverse: A conventional space probe would need about 80,000 years to get there -- about as long as humans have existed on Earth thus far.

Things would go faster with the help of futuristic fusion propulsion, which German-American physicist Friedwardt Winterberg designed as early as the 1970s for the legendary Project Daedalus. His blueprint, which has been further developed since, sounds adventurous: The explosions of tiny hydrogen bombs, that release huge amounts of energy, could accelerate a space ship to over 10 percent of light speed.

But even a flight to the new planet at that rapid speed would take half a century -- for the astronauts who dare to go, it would be a one-way journey. 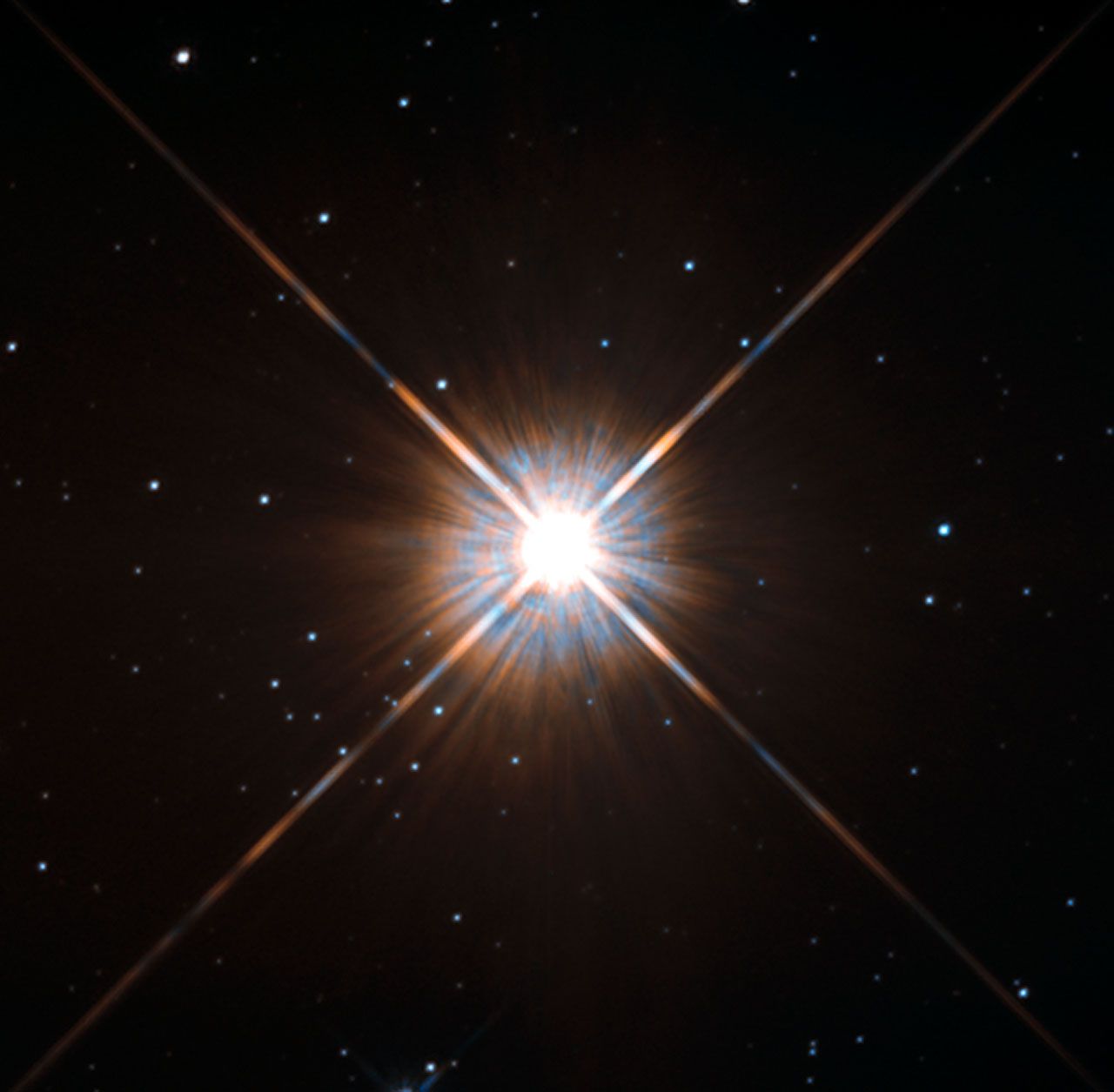 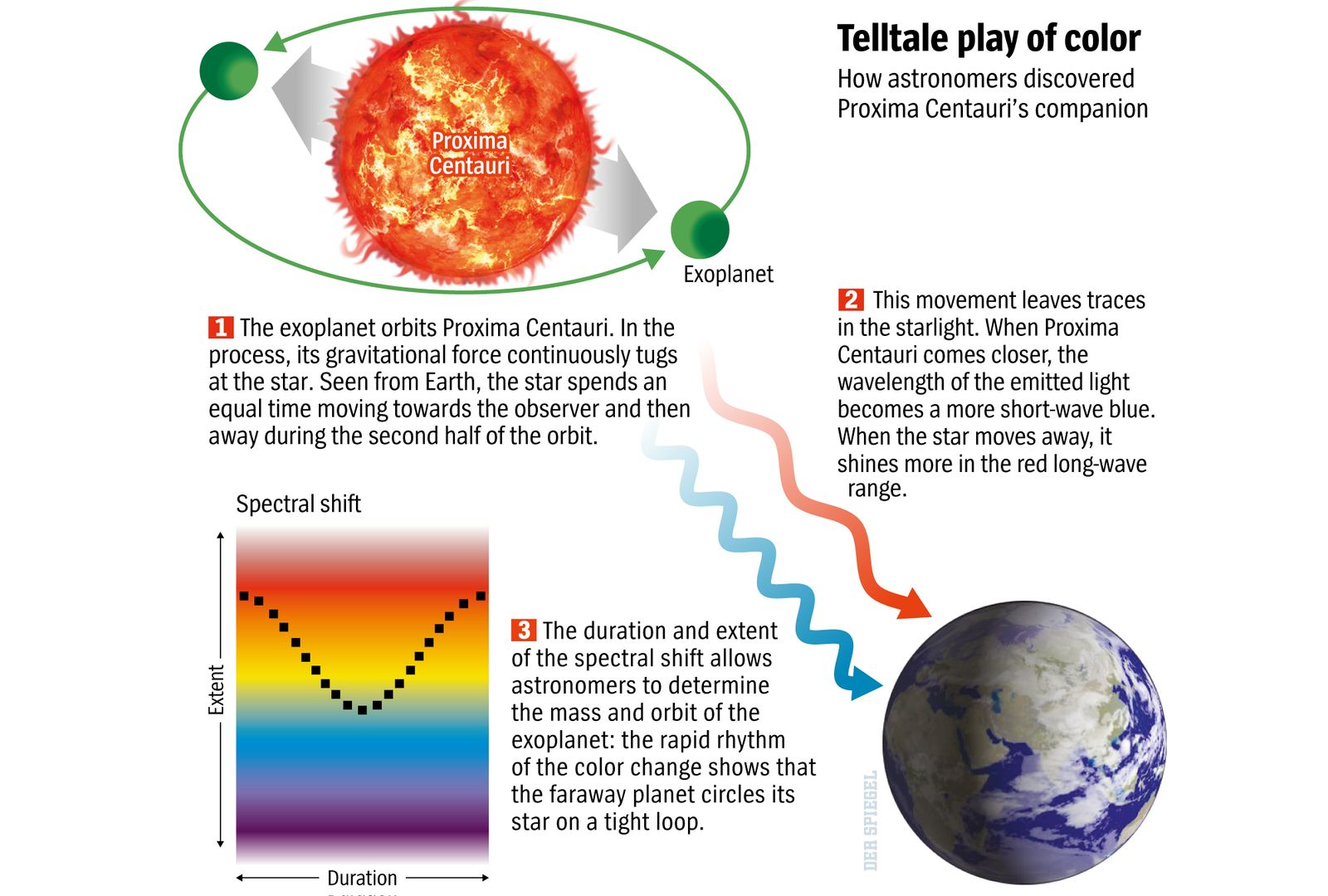 Graphic: A telltale play of color