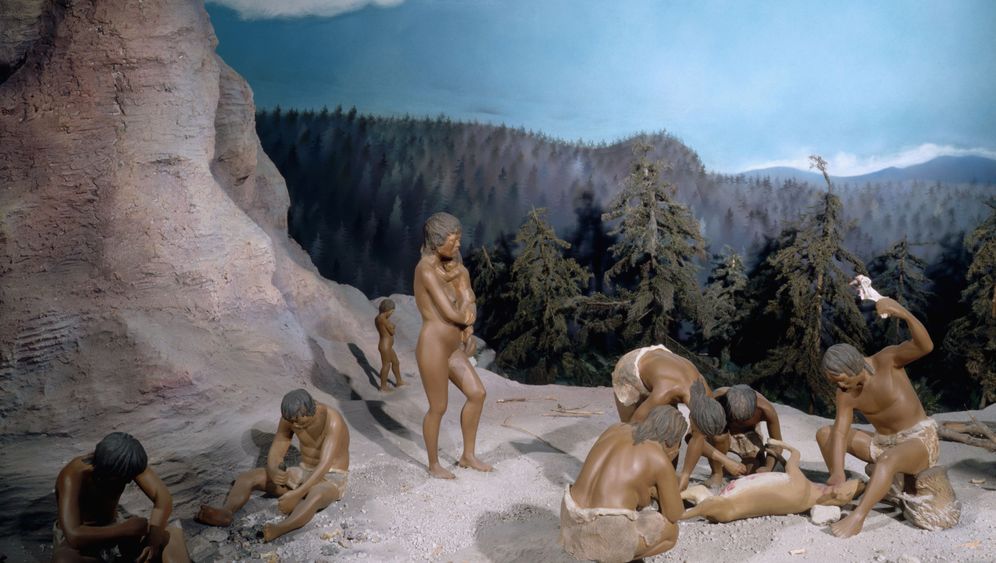 There are a growing number of people dedicated to the world of healthy food and starvation diets. Sometimes they try to convince their fellow human beings to join them in their strict approach to eating, advising friends and partners to cut down on beer consumption or give up bratwurst.

But now Tom Jones has come to the rescue of lovers of hearty food. The singer ("It's Not Unusual") was once considered a sex symbol. But Jones, who is about 1.80 meters (5'11") tall, had put on weight over the years, reaching more than 100 kilograms (220 lbs.). When Jones decided that it was time to lose weight, he chose a decidedly masculine method. The singer adhered to the diet of people who lived in the Paleolithic Age, which meant eating primarily meat.

The so-called paleo diet is more than just the crazy idea of an aging singer. In Hollywood, a number of actors fixated on staying fit, like actress Jessica Biel, have been seized by the urge to switch their diets to food our ancestors ate -- those who, as hunters and gatherers, roved the lowland plains and ate plants, berries and mammoth-meat steaks.

The paleo craze has now reached Germany. Within the last year, actor Moritz Sachs has outed himself as a celebrity fan of the diet. Over the years, viewers have seen Sachs, a character on the TV show "Lindenstrasse," put on weight. Thanks to the paleo diet, the chubby actor has lost 18 kilograms, he claims.

Proponents of the paleo diet frown upon food that some health fanatics believe make people fat, especially when enjoyed in excess. This is especially true of carbohydrates, which are abundant in rice, wheat and potatoes. Sugar is also on the black list.

But the gurus of this trendy movement are interested in much more than keeping people's weight down.

The meat and vegetable fanatics are seriously convinced that mankind committed a grave sin by learning how to cultivate land more than 10,000 years ago, and that the resulting changes in nutrition led to disease and lingering illness. They are convinced that scourges of civilization, like arteriosclerosis, diabetes and high blood pressure, are all fruits of the so-called Neolithic Revolution. Fans of the paleo diet seem to overlook the fact that early farmers saved many of their fellow human beings from starving to death by growing grain in an organized fashion.

The restaurant Sauvage recently opened its doors in Prenzlauer Berg, a Berlin neighborhood traditionally open to experimentation. The restaurant composes its dishes exclusively in ways that supposedly reflect the nutritional habits of early man. The owners strictly dispense with milk products and bread, pasta, rice and potatoes. The caveman-style chefs prepare cheese substitutes with pureed nuts and root vegetables. One of the items on the menu is crispy lamb brain in a manioc crust.

The rewards for switching to this audacious diet include healing and detoxification, as well as a heightened sex drive, claims Sauvage manager Boris Leite-Poço. This is how the restaurateur describes his culinary creed: "When you adjust your eating habits to the paleo principles, you are feeding your body in the way nature intended."

But for nutritionists and biologists, this is nonsense. A "paleo fantasy" is what evolutionary biologist Marlene Zuk of the University of Minnesota calls the diet trend. "Its supporters assume that, at a certain point in time, our ancestors where perfectly adapted to their environment. But these conditions presumably never existed," Zuk says critically.

'All That Counts is Reproductive Success'

In addition, nutrition physiologist Alexander Ströhle of the University of Hannover in northern Germany notes that "there is no such thing as man's natural diet." According to Ströhle, there is no evidence that our ancestors were specialized to eat certain foods.

Seattle gastroenterologist Walter Voegtlin wrote a book about the concept of the stone-age diet in the 1970s. The doctor convinced a growing group of paleo converts to believe in the nonsensical notion that eating grain actually harms human development. But apparently Voegtlin and his followers misinterpreted the mechanisms of evolution. "Optimal health is not a selection criterion. All that counts is reproductive success," says food scientist Ströhle.

Of course nutritional experts also tend to advise people to consume fruits and vegetables rather than burgers and fries. "However, this brings up the heretical question," says Ströhle, "of whether this insight truly requires a questionable explanation based on evolutionary medicine."

Despite objections from the scientific world, the advocates of paleo nutrition are more popular than ever before. Scientists find it appalling that a number of proponents of the supposed Stone Age diet claim to be knowledgeable about a period of time that lasted around 2.5 million years and ended in about 8,000 B.C.

Fossil evidence that could provide precise details about early man's eating habits is rare. Presumably, however, the inventors of the hand ax were not especially picky, out of pure necessity, and consumed everything that seemed edible to them. "On the whole, the feeding behavior of prehistoric man, like that of his Pleistocene ancestors, was very flexible," says nutrition expert Ströhle.

A Sweet Tooth is Not an Abberation

Today's devotees of the paleo diet have largely eliminated carbohydrates from their diet. However, they cannot invoke their ancestors if they want to avoid the consumption of sources of energy.

The craving for high-calorie food is apparently not an unnatural aberration of civilized man. "Instead, craving sweet foods is more likely related to the fruit-based diet of our hirsute ancestors," Ströhle suspects. "In addition, an important source of nutrition is often swept under the rug: honey."

In the summer months, some indigenous people consume up to one-and-a-half kilos of the natural sweetener a day. "This would make every modern nutritionist's hair stand on end," says Ströhle.

Anthropologists have also found evidence that prehistoric man dug up starchy tubers from the ground to satisfy their voracious appetite for saccharides.

But paleo diet aficionados remain undeterred, clinging to the illusion that their archaic ancestors preferred to eat healthy plants and only consumed very moderate levels of carbohydrates in the form of fruit. And modern imitators of Stone Age man go to great lengths to copy what they did exactly.

Restaurant manager Leite-Poço, for example, buys his meat from a farm in Trebbin, in the eastern state of Brandenburg, where the cattle graze on lush meadows and are not fed grain. Of course, he also buys his fruit and vegetables from organic farmers.

"We have paleo bread, and we have paleo cheese, but in terms of taste, they have nothing in common with their conventional namesakes," says Leite-Poço.

It is doubtful that this approach is helping big-city dwellers eat like their role models from the Stone Age. Scientists at the New York State Agricultural Experiment Station cultivated the Asian wild apple (Malus sieversii), which our ancestors once picked from trees. When an author from the New York Times tasted the fruit, he said it was "like biting into a crumbly Brazil nut, surrounded by a jacket of leathery skin."

For nutrition experts, this is no surprise. "Our modern food products are well removed from their wild ancestors. They have been extremely modified and, as a result, are more calorie-rich, easier to ship or simply better-tasting then the original," says biologist Zuk. She has sobering news for paleo diet fans: "Even if we wanted to, we couldn't live exactly the way our ancestors did."

In a recently published book, Zuk is tickled by the reversion to the Stone Age: "Did cave dwellers wonder, in nostalgic moments, how good life was when they couldn't walk on two legs yet and were just lazing about in the trees?"