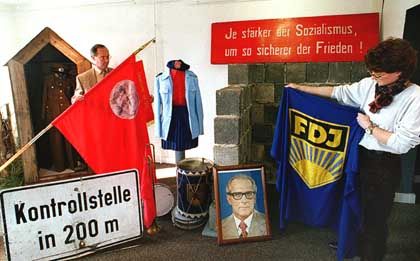 An employee of an East Germany-themed museum in Eichsfeld shows off an FDJ flag. The organization is back, 18 years after the fall of the Wall.

For young people wanting to get ahead in communist East Germany, membership in the Free German Youth (FDJ) was a must. But since German reunification in 1990, the organization, which served as a sort of communist Boy and Girl Scouts, has largely been regarded with disdain, along with the other trappings of the East German regime.

Now the FDJ is back and looking to expand. Members of the reincarnated FDJ demonstrated at Berlin's Alexanderplatz square Sunday to mark the 58th anniversary of the founding of East Germany. Members wearing the familiar blue FDJ shirts distributed flyers and canvassed for members, while an information board addressed the question: "What was and is the German Democratic Republic (East Germany)?"

Berlin tabloids expressed outrage at the return of the socialist youth organization. "The FDJ Crawls Out of Its Hole," was the cover headline of the Berlin tabloid BZ on Monday. "Why did the authorities allow the FDJ's creepy show?" the newspaper fumed.

"The United States used to be our enemy, but now it is the Federal Republic of Germany," the new-look organization's leader, 29-year-old Ringo Ehlert, told the newspaper, admitting that he was barely old enough to remember East Germany.

"We have to educate young people about the historical necessity of the GDR," Ehlert told the newspaper Märkische Allgemeine, justifying his decision to revive the FDJ. In interviews he has said that he considers East Germany his true "homeland" -- one that was "annexed" by "German imperialism."

The new FDJ, which is made up of young Germans with far-left political views, is under observation by Germany's domestic intelligence agency, the Office for the Protection of the Constitution, the BZ reported.

Both boys and girls could be members of the FDJ, which was founded in 1946, and joined at the age of 14. Around 80 percent of young people in East Germany belonged to the group, and non-members could find access to higher education difficult. Famous former members including ice-skating star Katarina Witt and German Chancellor Angela Merkel.